Alright everybody, lets Roar because Rosy and Ginger are turning Four!

Well Rosy and Ginger turned four. They had their Rore for Four monster themed birthday party on Saturday. Look at these sweet faces. If they seem a bit off, that is only because they both have 103 degree fevers. 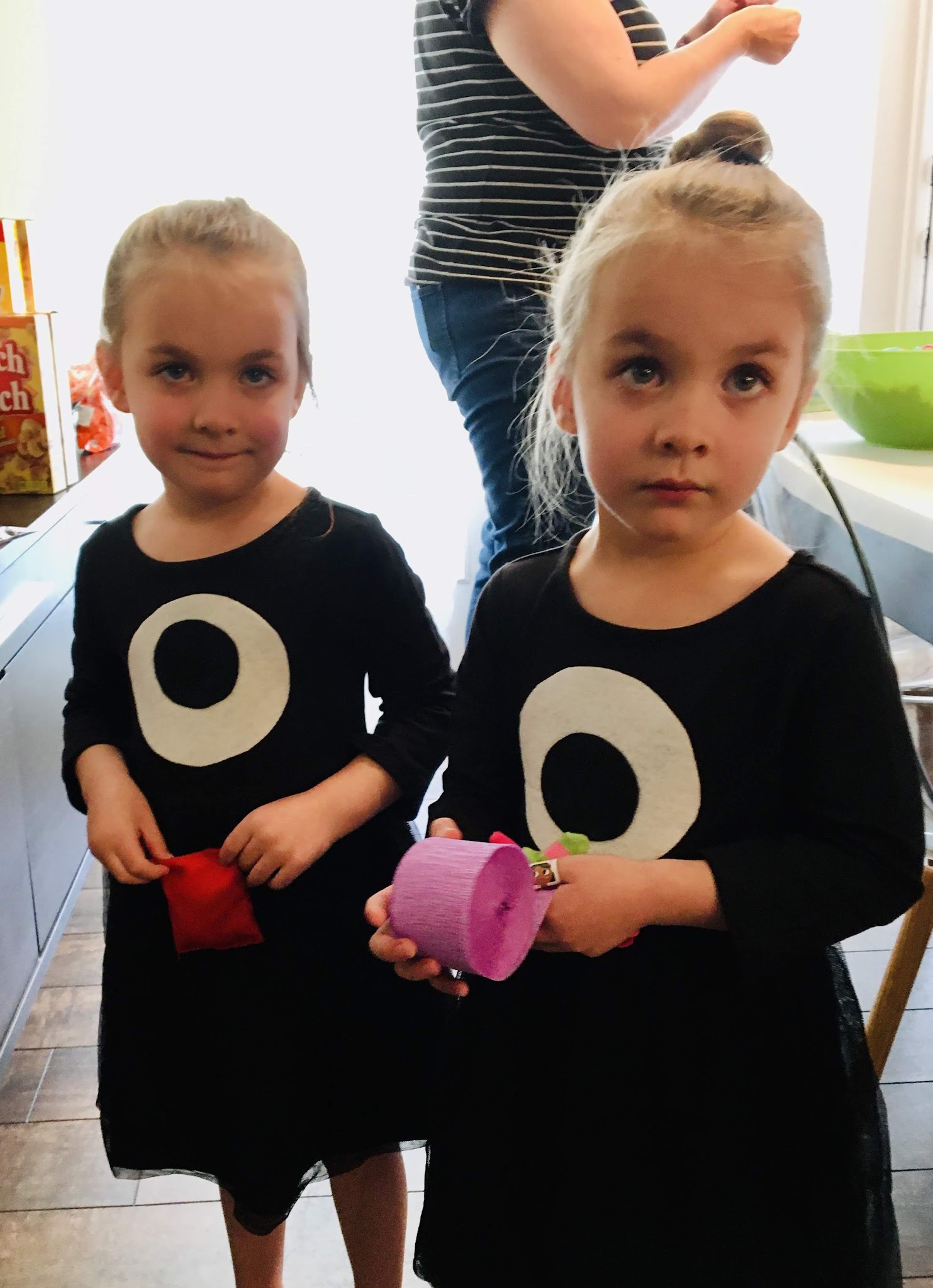 BUT aren’t they cute with their cute monster dresses that their mom bought and Malia decorated?!

The whole Party was quite the affair, and despite the slight downer moment of finding out the girls were sick as we arrived, it really was a really great party. 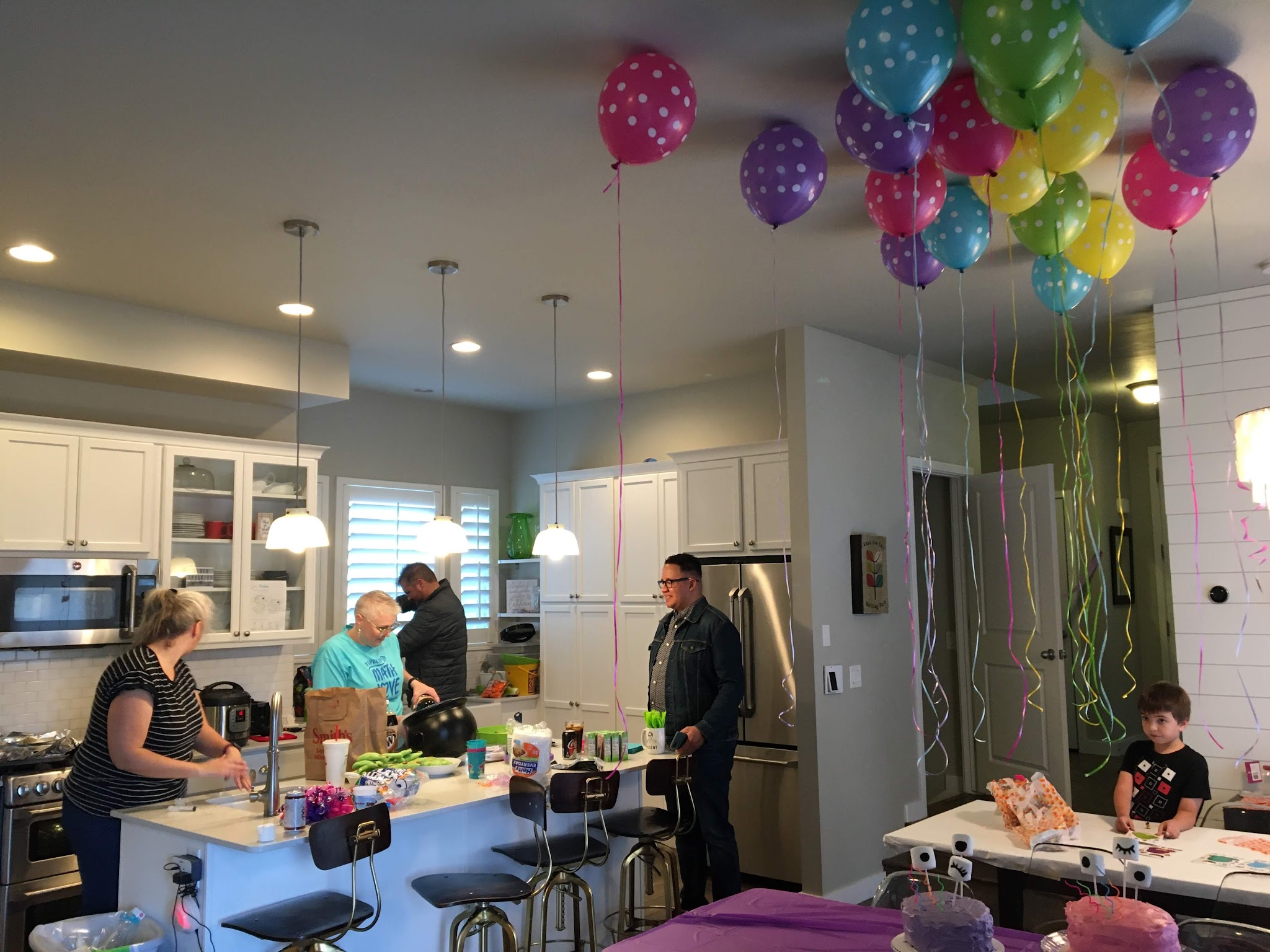 Malia made the chocolate and vanilla monster cakes. 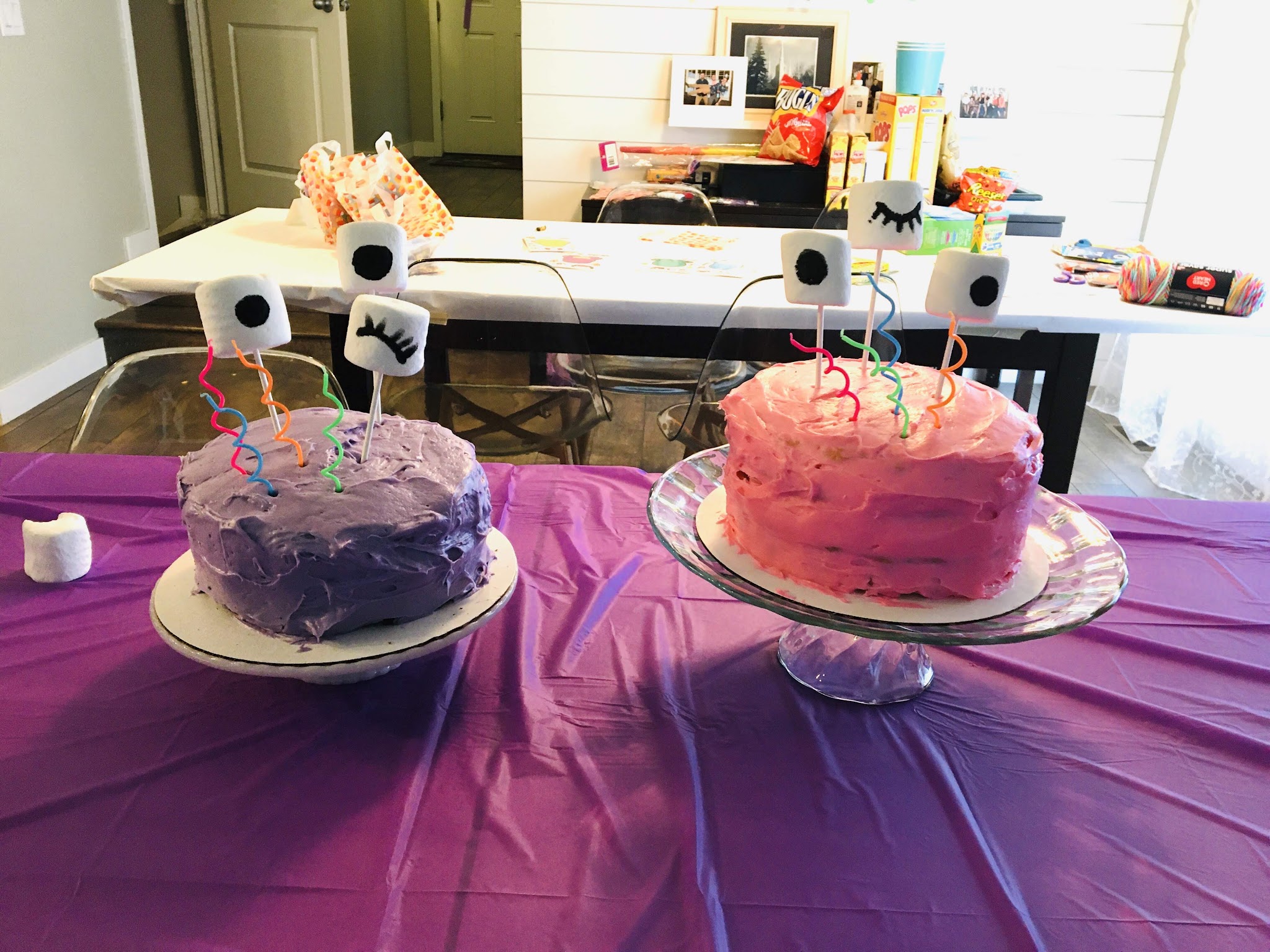 There were Roar for Four banners all over the house.

It was a family affair. Rachel was there with Lucy and Hazel. Malia was helping our hostess. Betsy’s boyfriend Chris was there too!

And what would a party for these ladies be without their adoring father Nick?

We came straight from the Halloween concert, so the kids were still excited about costumes. We took them out of their Halloween kits, and they got into monster outfits that they packed for themselves. Like seriously, I had nothing to do with it. Lucas in his monster feet slippers and tail.

Mirah in her Veporian tail from Halloween a few years ago. The kids all played outside despite the day getting a little chilly.

As the girls medicine kicked in they started participating more and more. 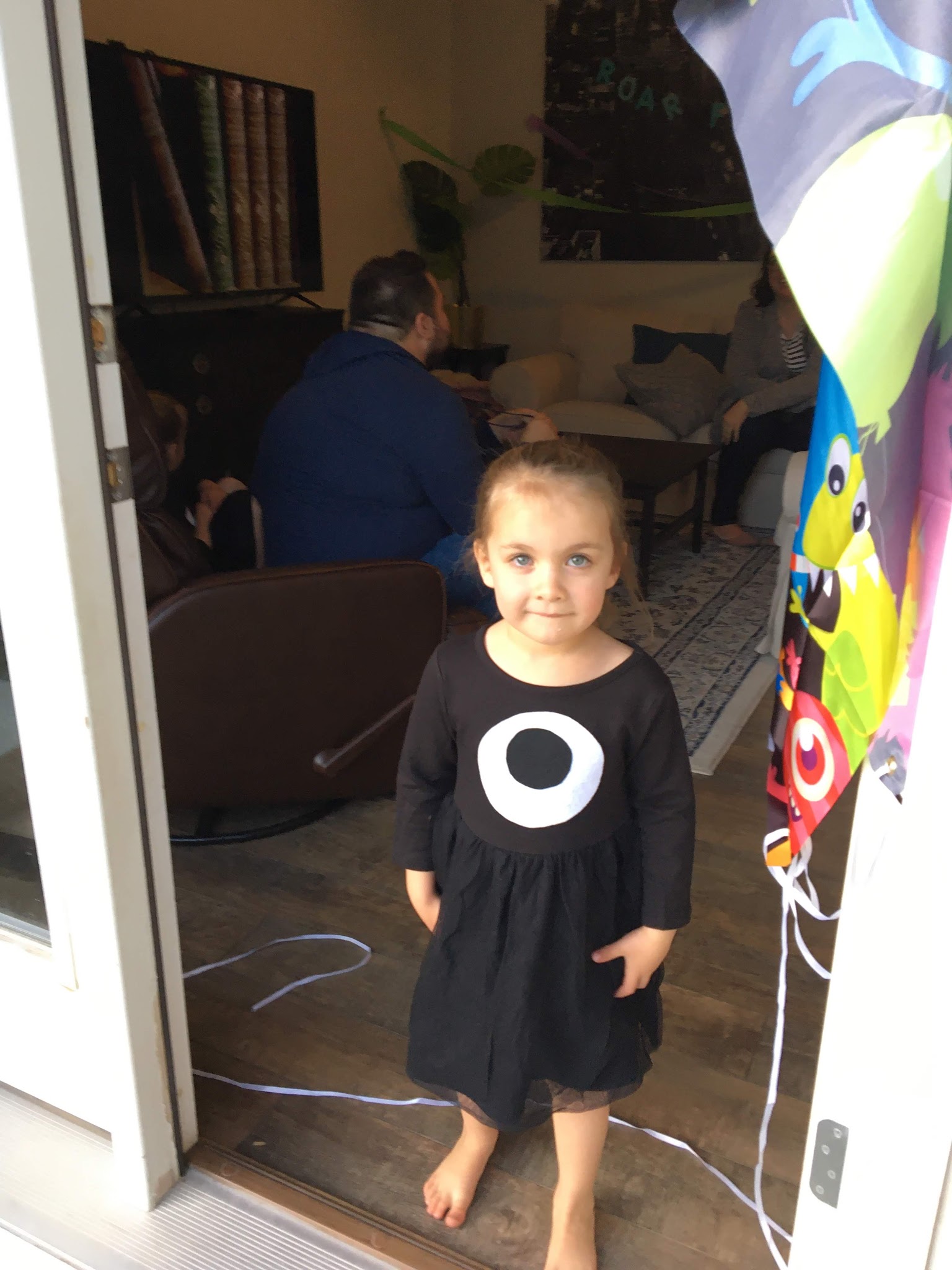 It was time for dinner, and we got the kids called in with some “witches brew” root beer. 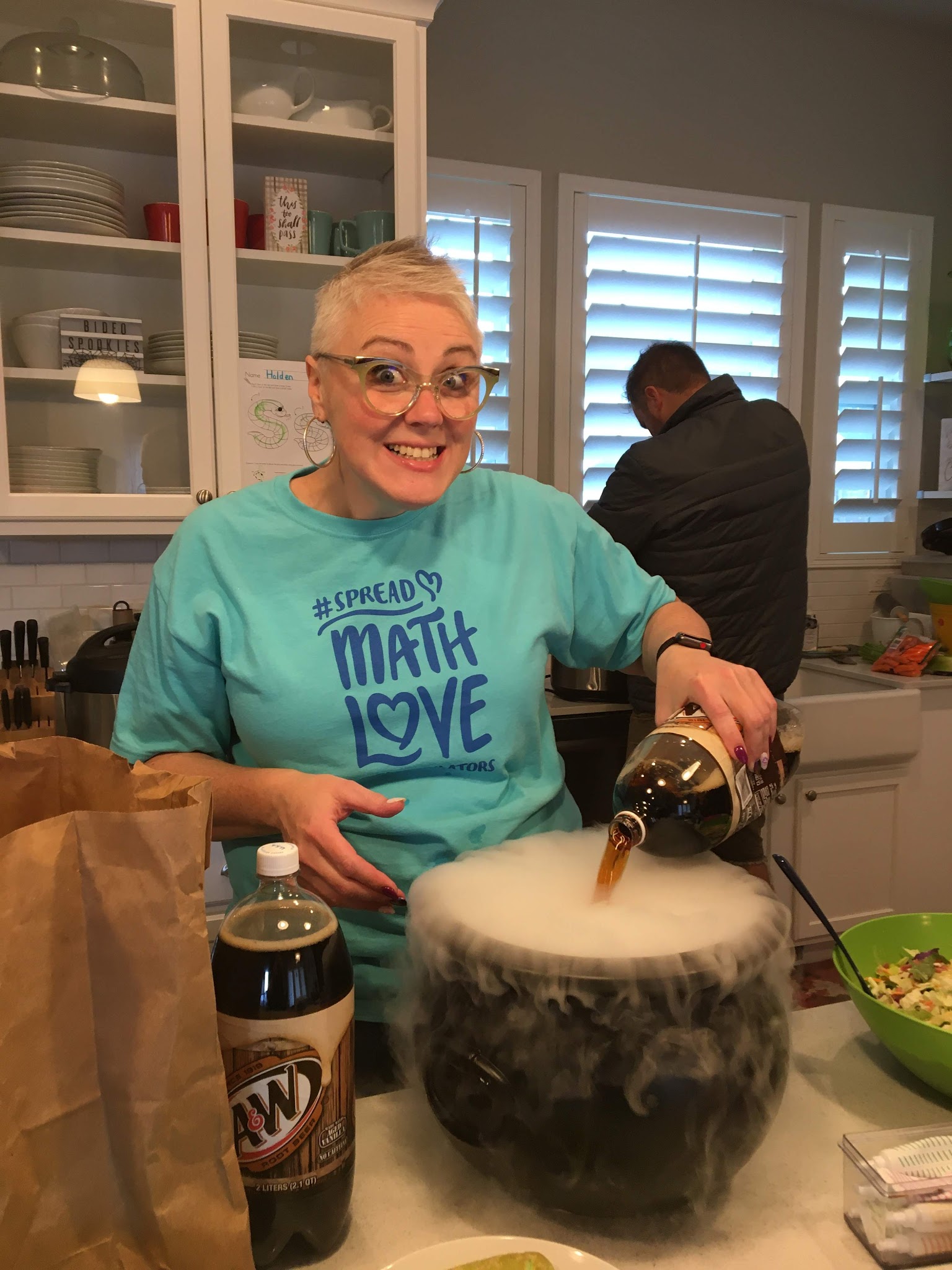 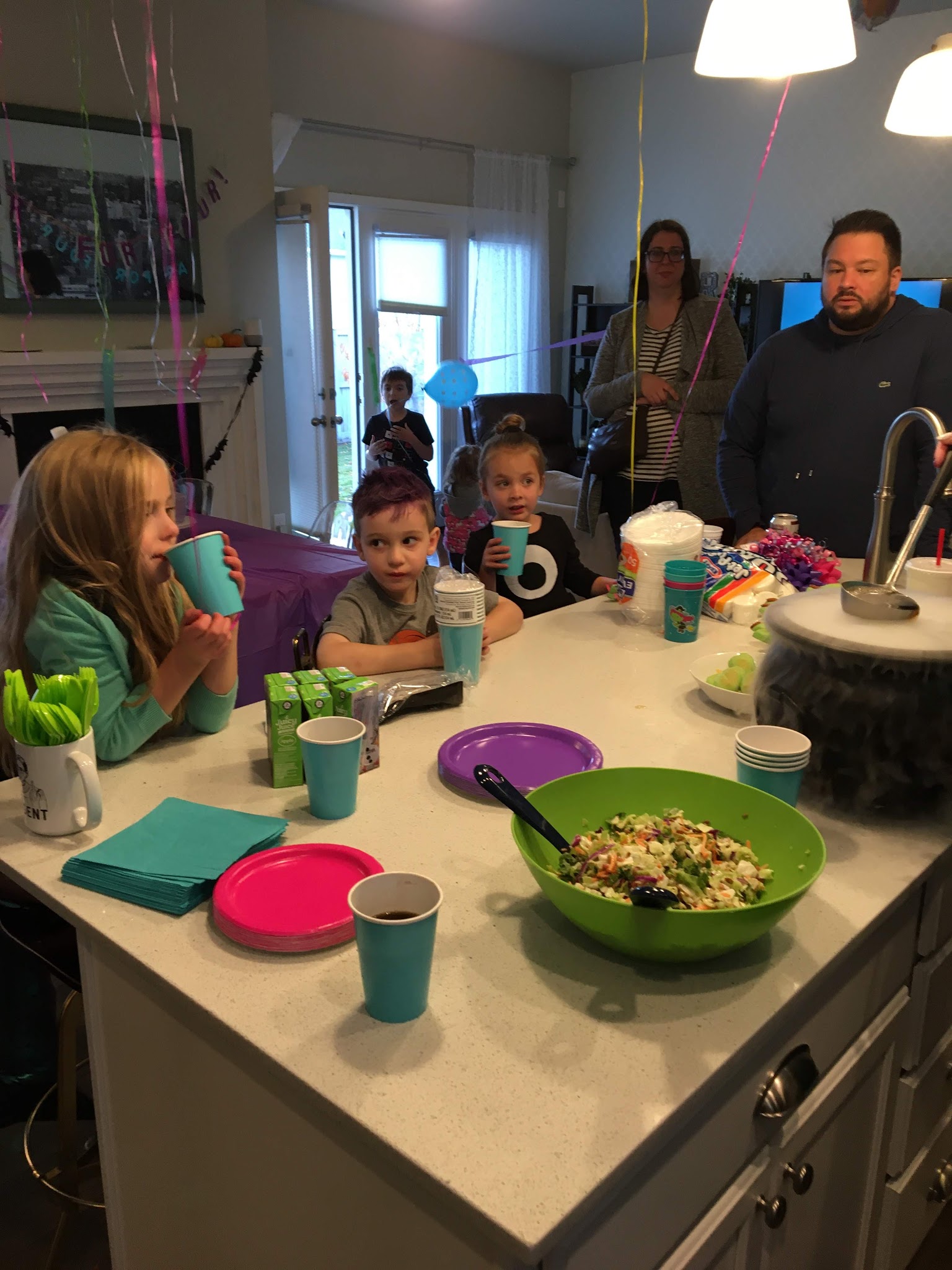 Everyone ate. It was all very good.

After dinner Malia get the kids all around the table to color monsters on the paper table cloth.

Mirah drew this one. It is really good. 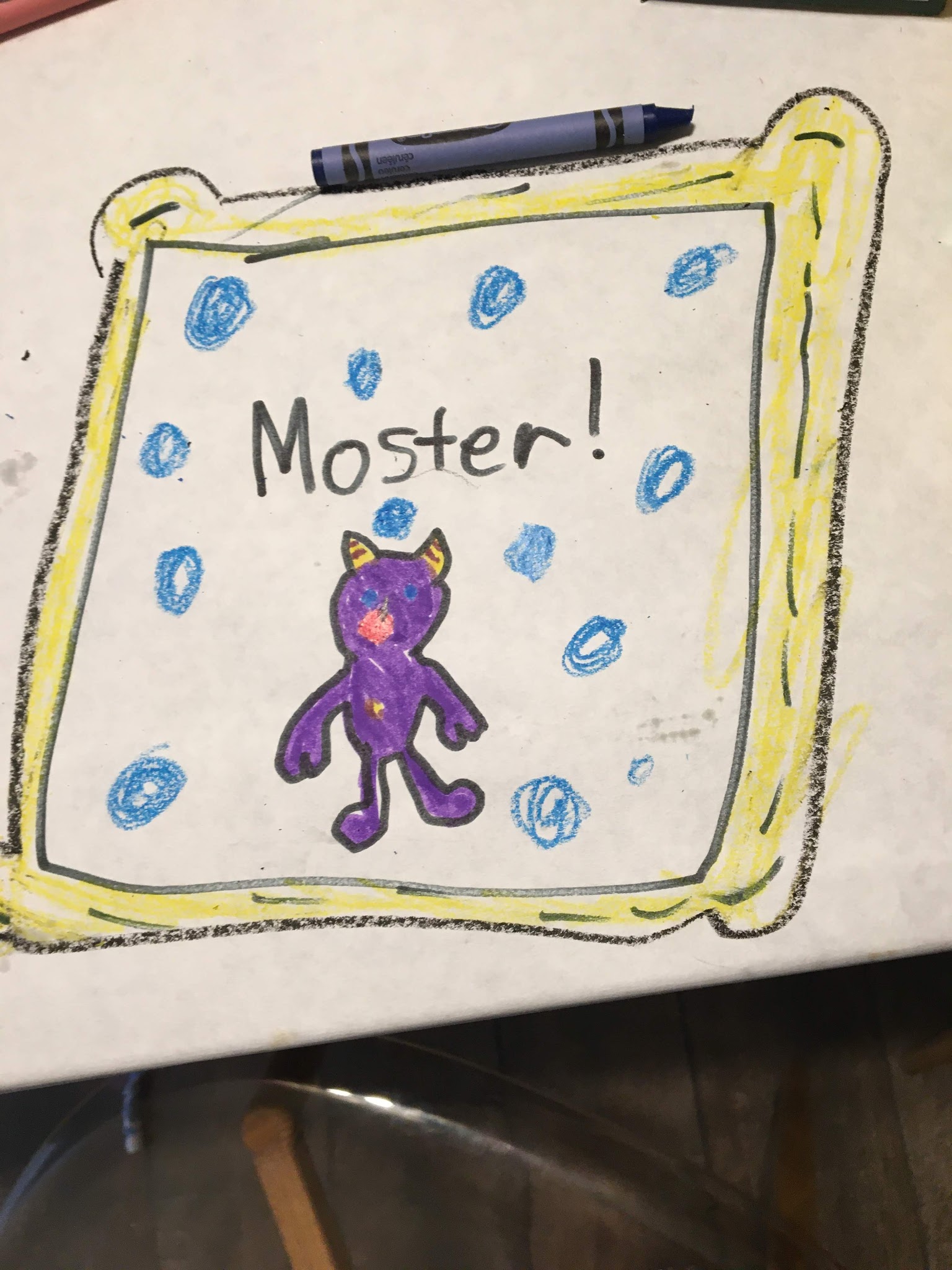 Again, in an effort to avoid getting germs on food Nick and Betsy presented bread sticks with candles for the girls to make wishes on. 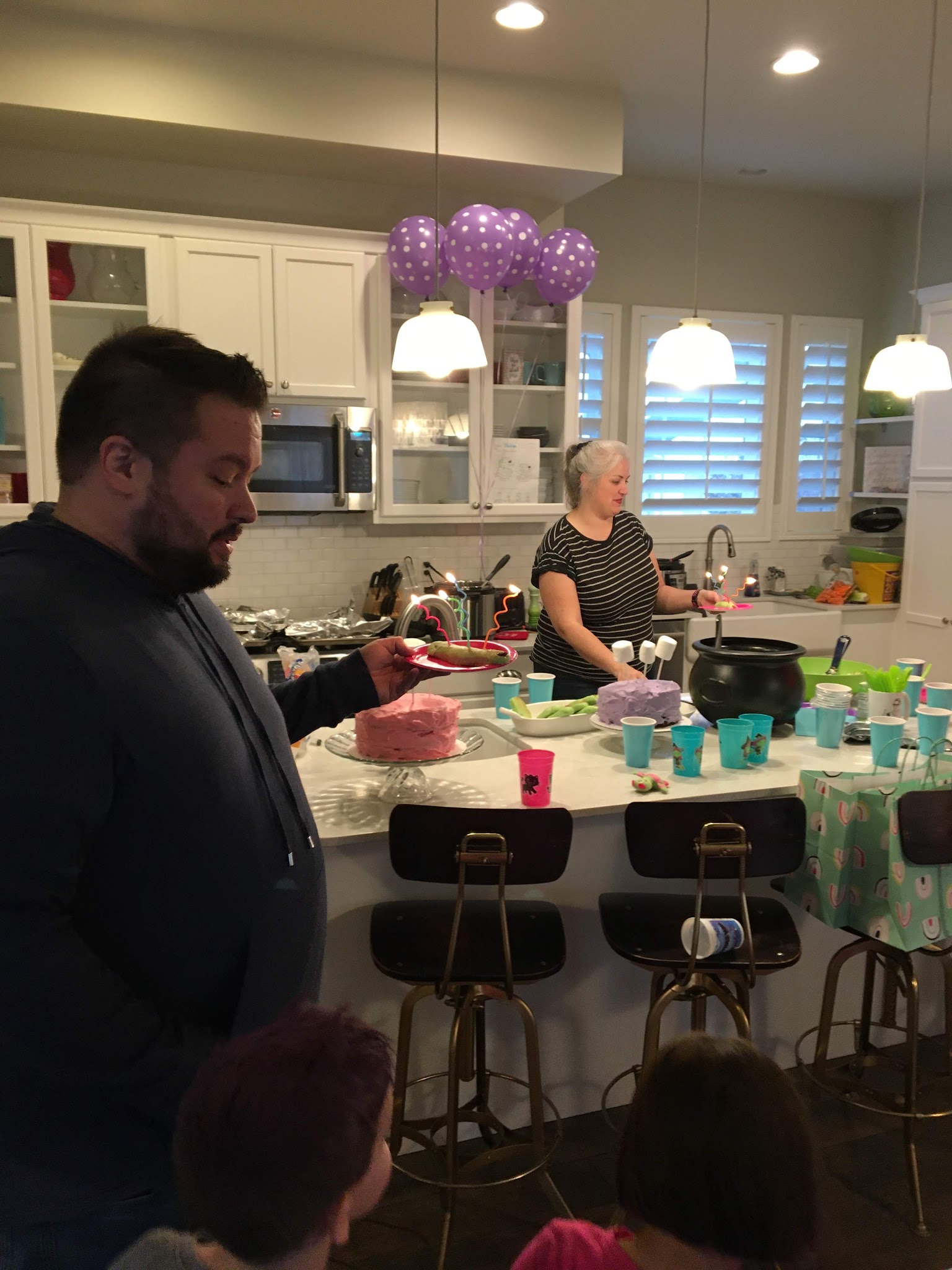 Giner was into it. Rosy was not. 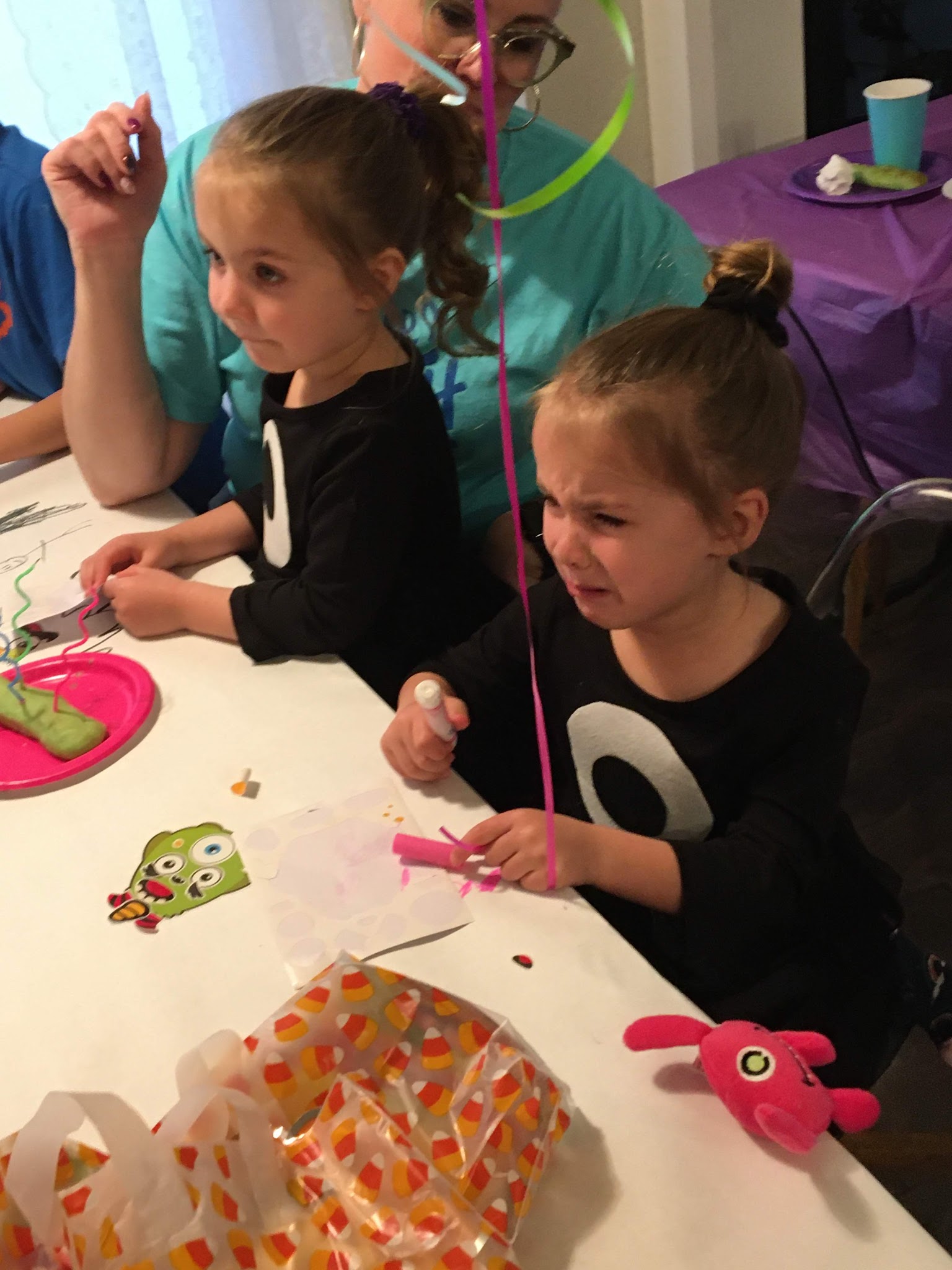 They were both into getting presents. 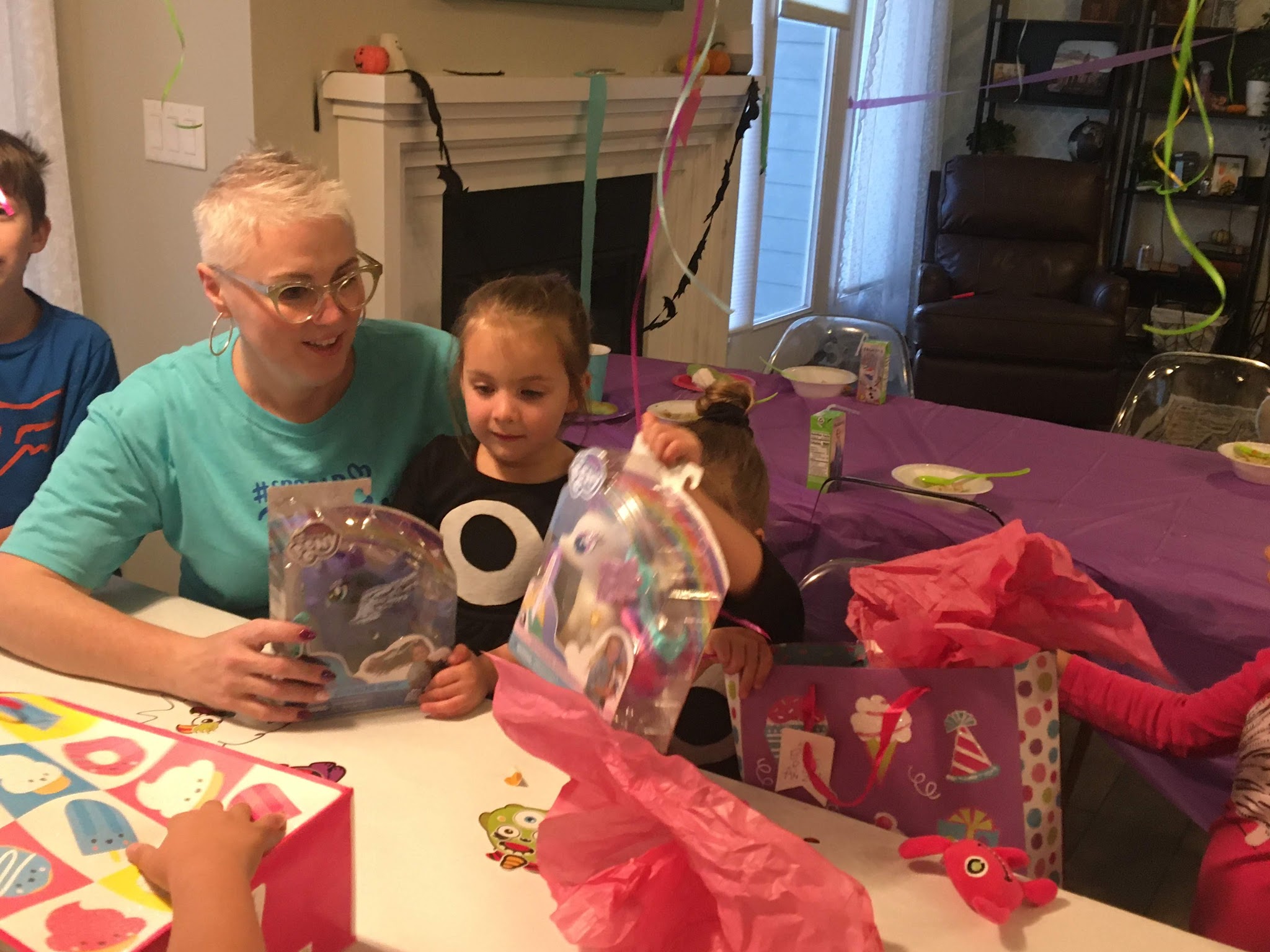 We got them Sheriff Cali dresses with pink purses. Rosy, again, was no impressed.

The cake was delicious, I especially loved the home made cream cheese frosting. YUM!!

We left much more quickly than planned on, again trying to avoid spreading illness. BUT on the way home Malia sent us these:

Which gives me hope that they liked our gifts.

The party favors we came home with were on point. The kids spent all day Sunday busy with them: 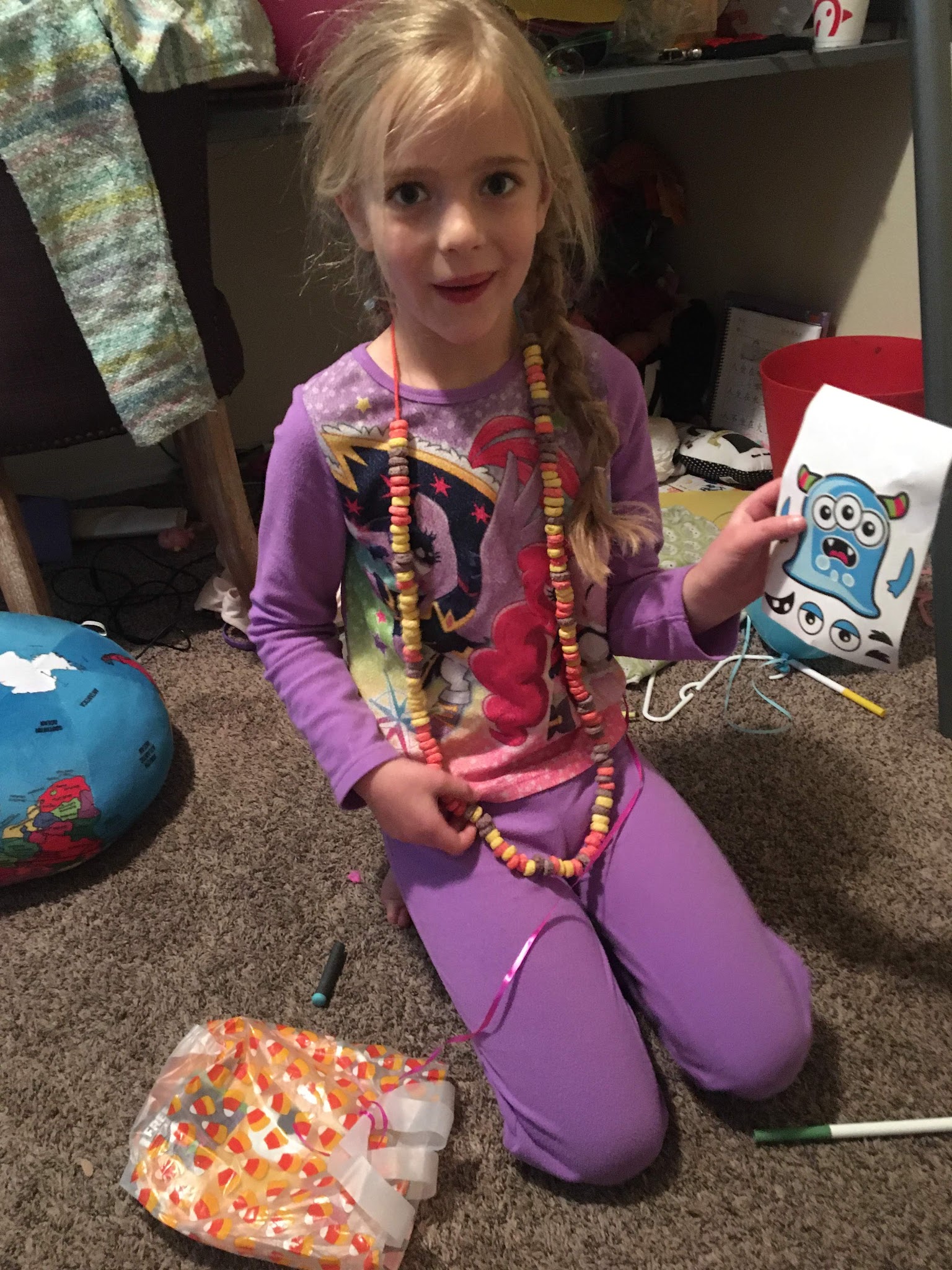 When I woke up on Sunday morning Mirah had made her fruit loops necklace and was doing her monster sticker activity.

Lucas and I did his during sacrament meeting. (His stickers, he sat on Saturday night and quietly and slowly ate all of his fruit loops. 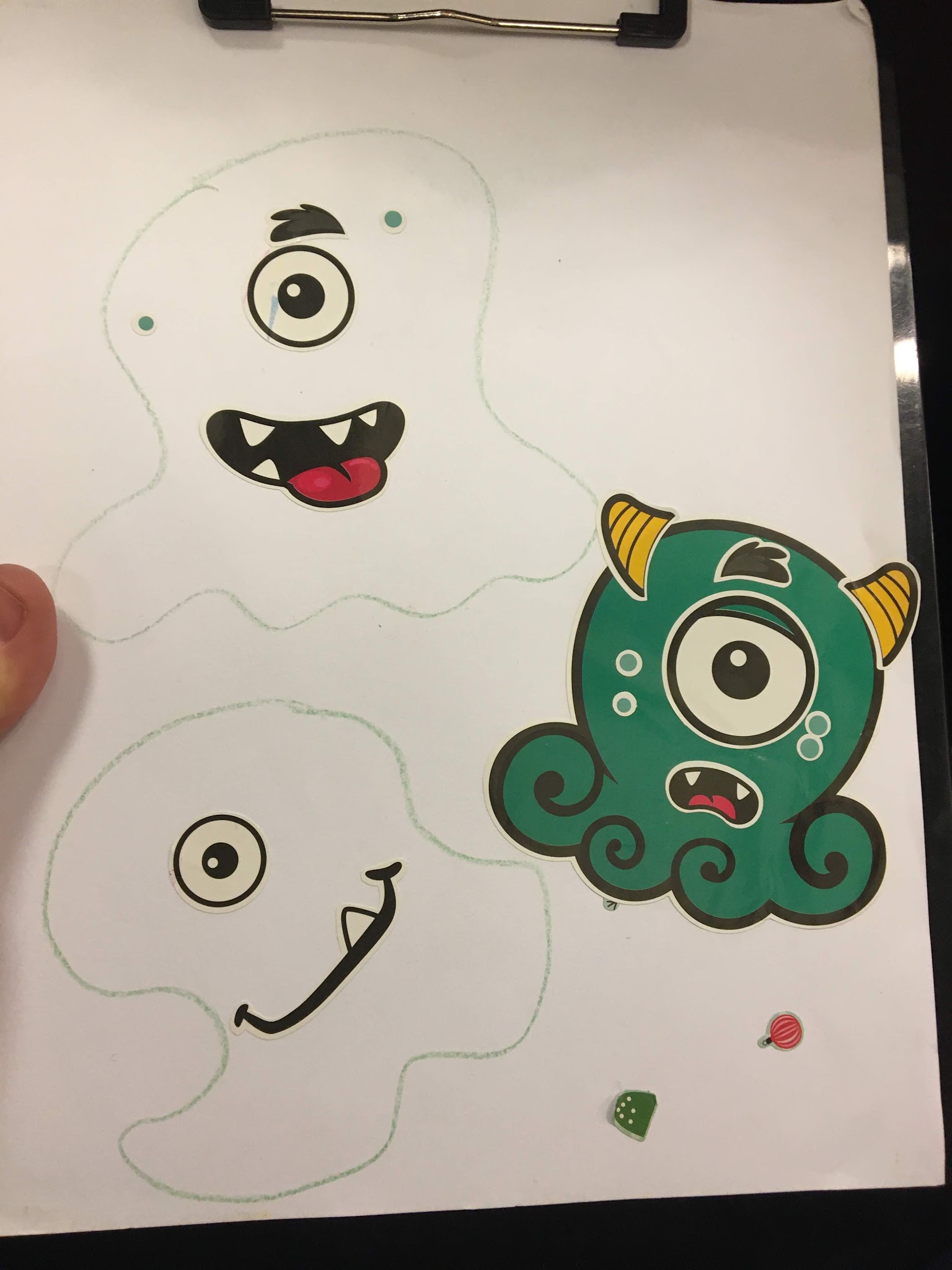 A great party despite the illness. Happy Birthday ladies. LOVE YOU A MILLION!!!

I didn’t mention but we also watched Sleepy Hollow, another Halloween tradition in the books.