The day dawned bright and cold, and we opted to have a quick pastry breakfast.

On our walk to the train, we messaged the kids, as we had our breakfast…

and walked past Notre Dame.

An interesting train ride, and a 10 minute walk later we found ourselves here, at the gates of The Palace of Versailles. 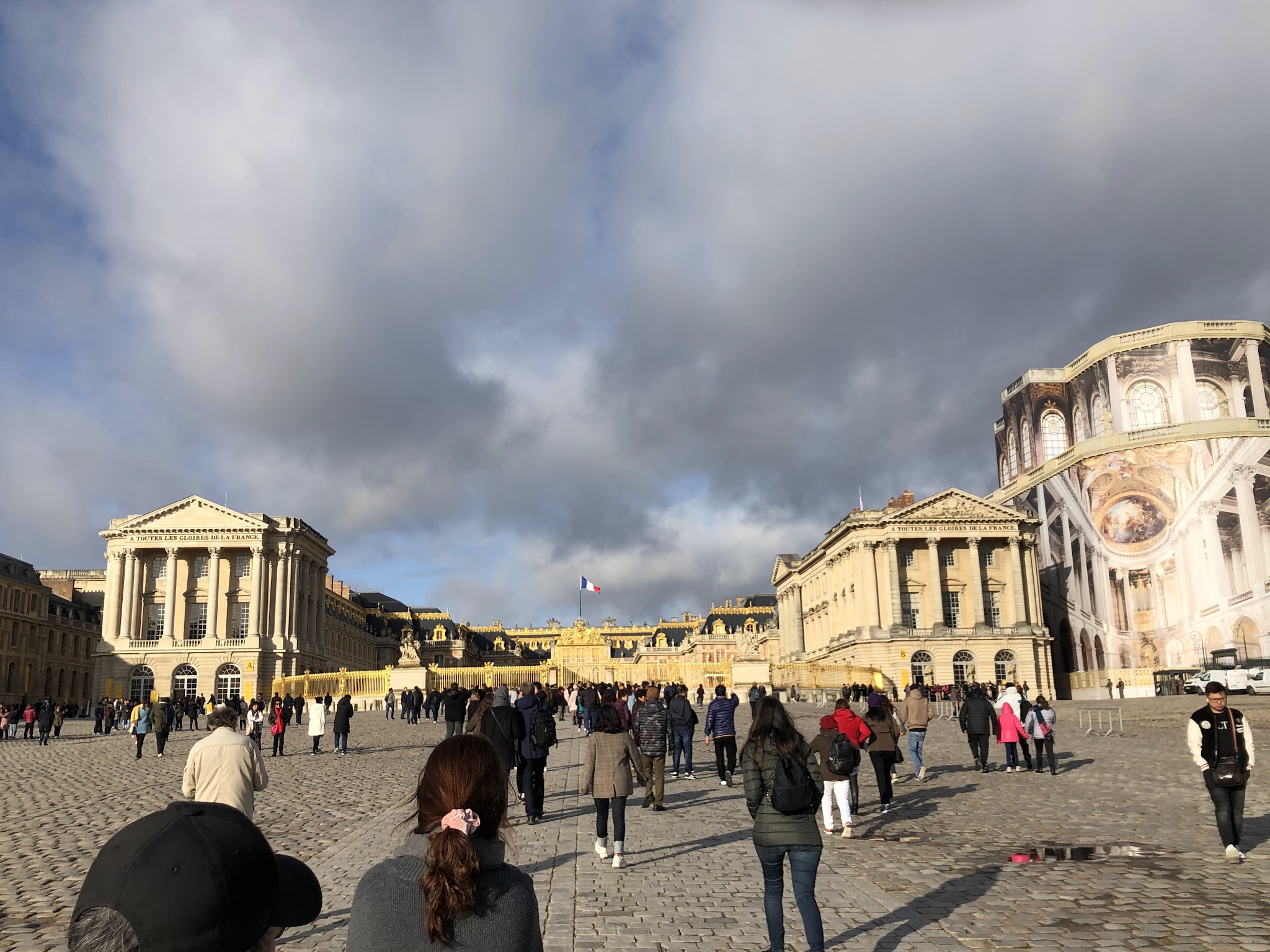 Here I am, telling the kids all about it. I was so totally stoked.

And there we were at the Golden Gates. 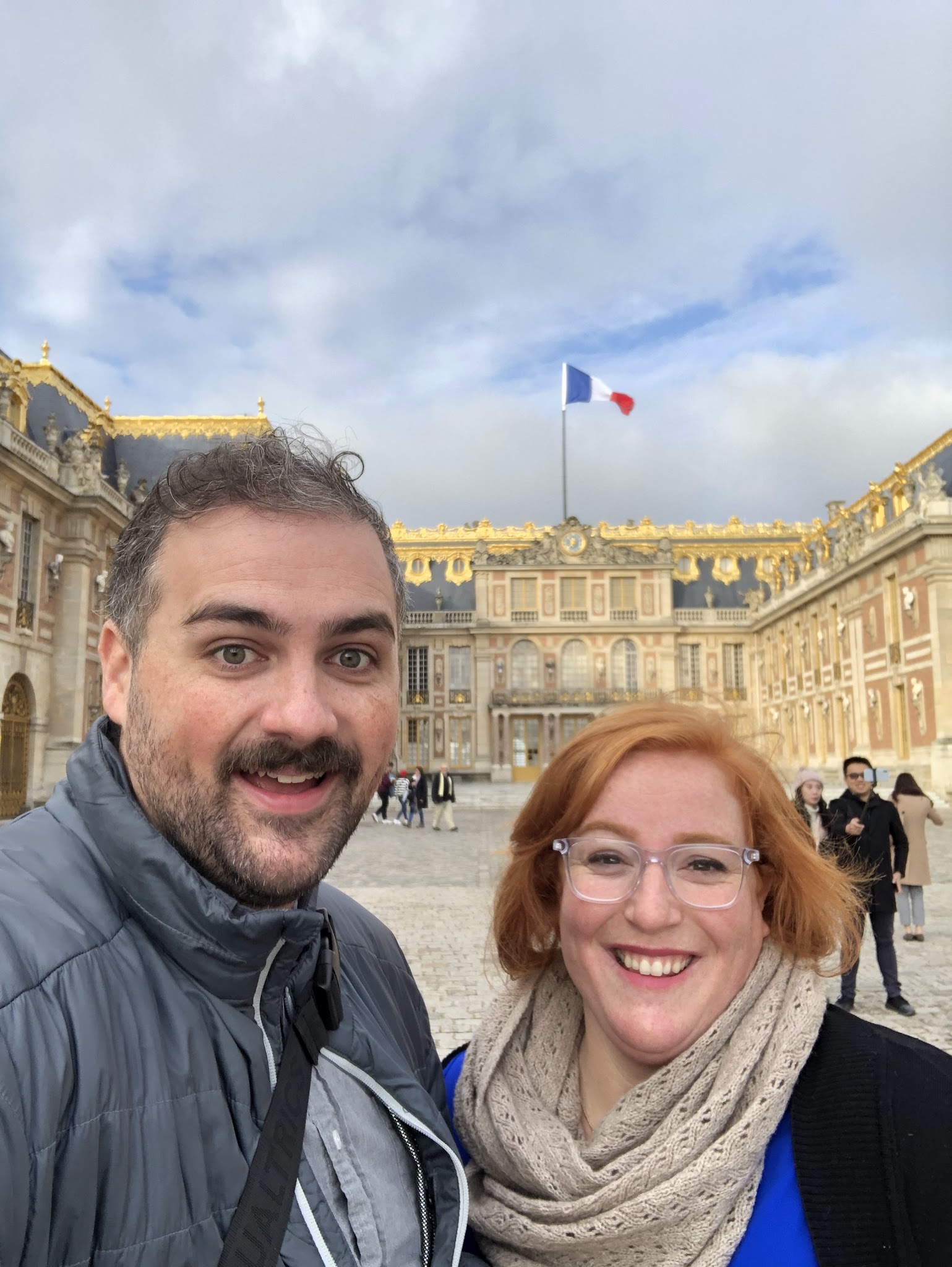 To the far left there were some amazingly modern golden rooms where you go through security checks. The through a courtyard and into a dark stone hall of statues.

We started and found ourselves in rooms filled with some of my favorite things, dioramas or models of larger amazing things. Like this one of the Opera. 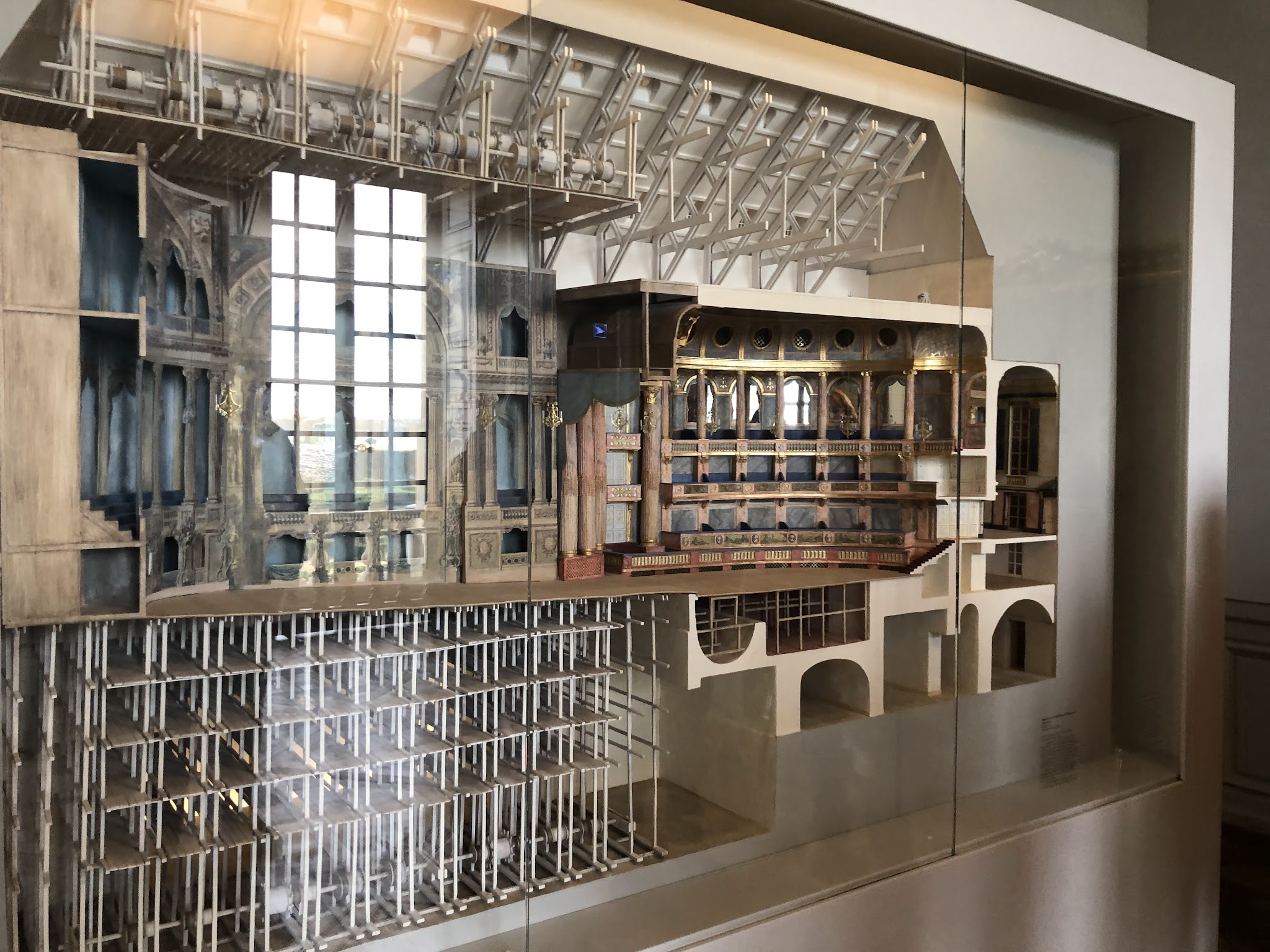 And these of the phases of the building of Versailles. And the bottom two of the King’s bedroom and of the ceiling in the Hercules Room.

There was a simple set of rooms that explained the long and torrid history of these buildings. How they were built by a man trying to get away with his disgusting wealth until his people rose up and killed his grand son and his family. The palace sat abandoned for years, looted and wrecked.  Which makes sense, but I never really thought about it much until I saw the painting on the right. I learned that when Napoleon came to rule he remolded the palace and even lived there for some time, until he finally turned it into a national museum.

The sheer size of the place, and thinking about how it was SO much more than anyone person could ever need. I can see why the people rebelled. 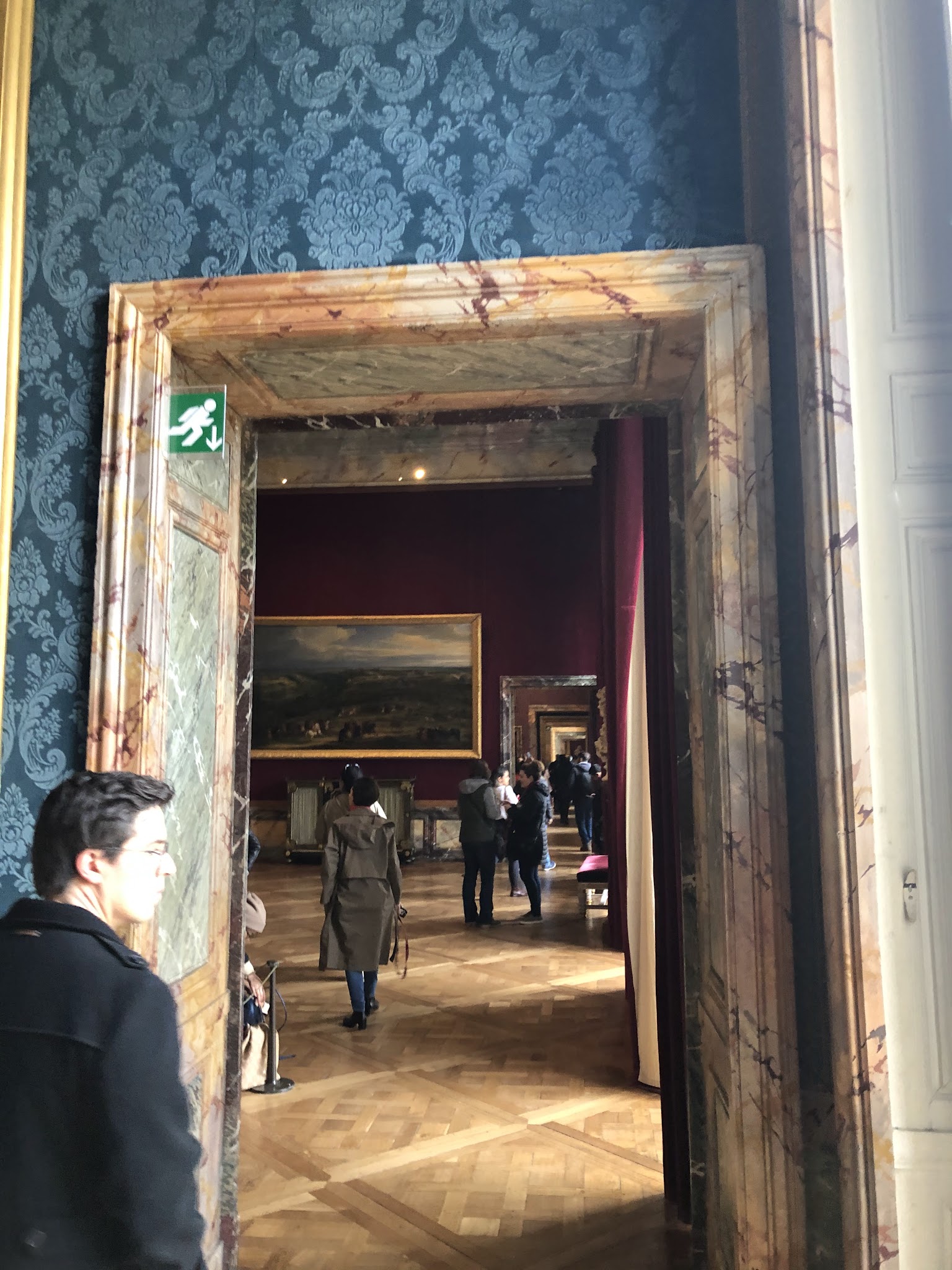 As soon as that thought came, it left when I got a look at these amazing paintings.

And then began gallery after gallery of empty rooms. These were the King’s rooms. Each one had maybe a chair in them, and walls covered in painting. 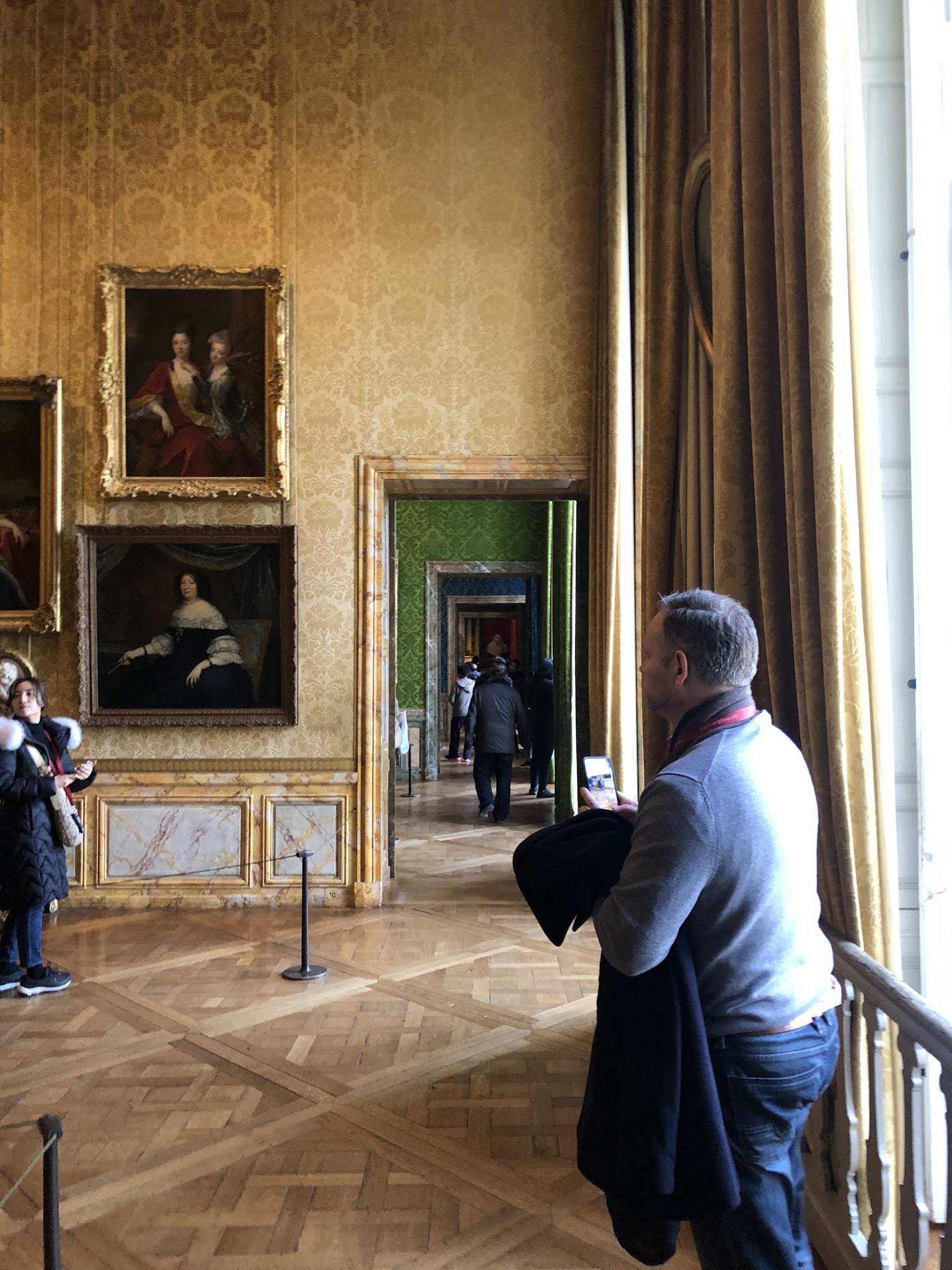 Then to the Hercules room. A breathtaking room covered in frescos. 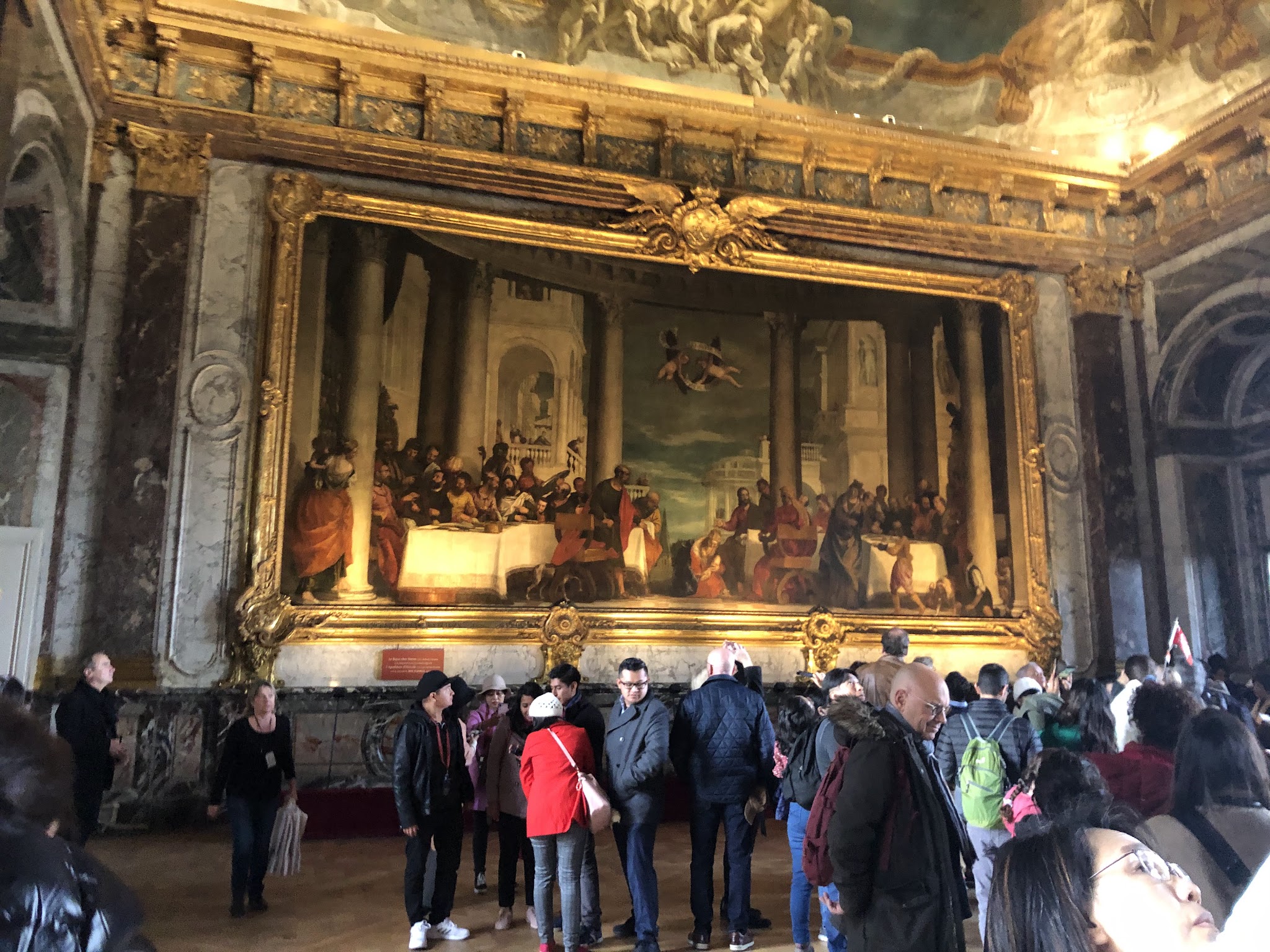 The fresco on the cealing seemed to shine and glow. You can’t tell, but the three logs in the fireplace are actual full sized tree trunks. Like eight feel long at least.

On down another long set of rooms. 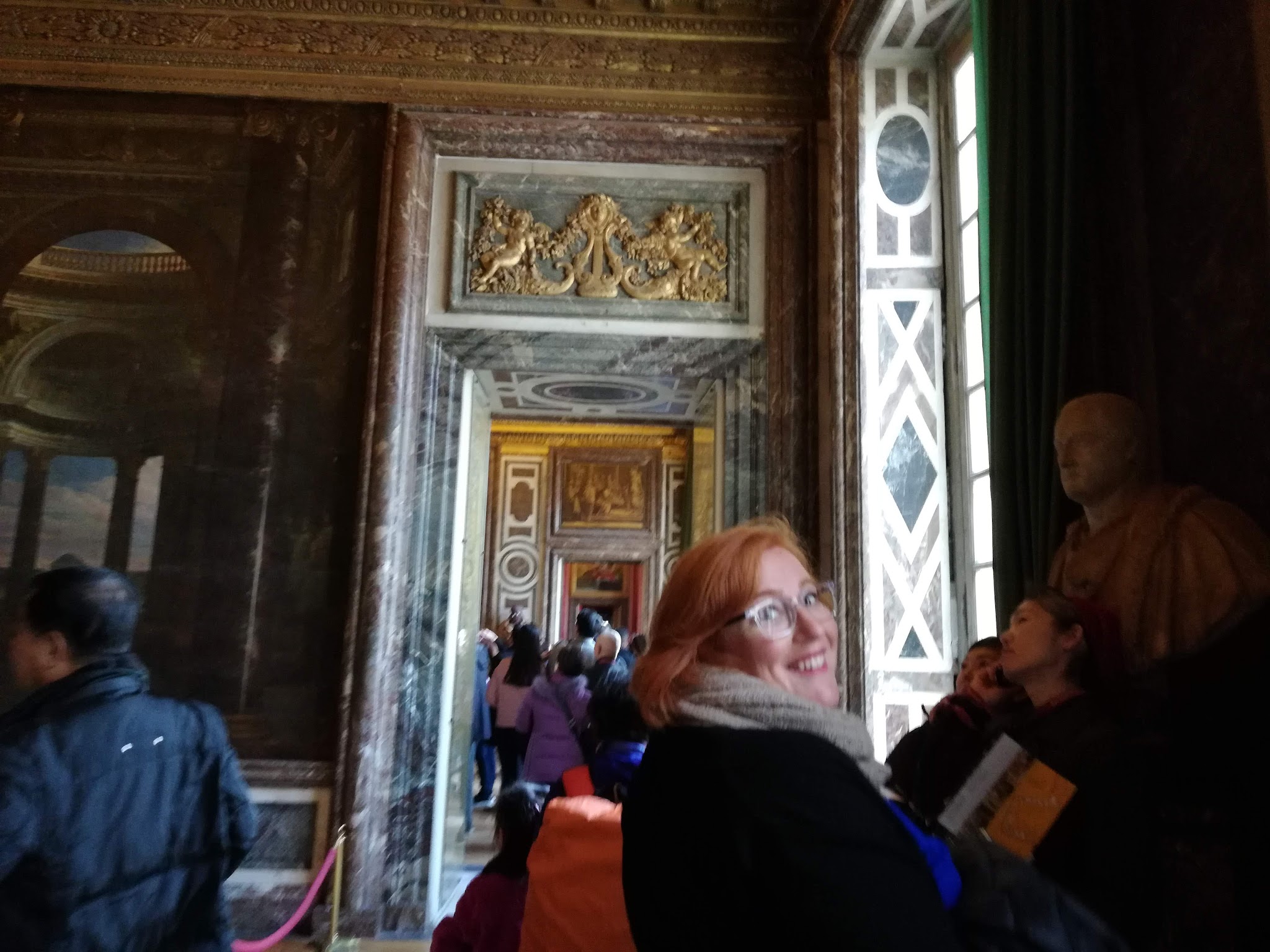 Including a the royal bedchamber.

Then to the Hall of Mirrors. 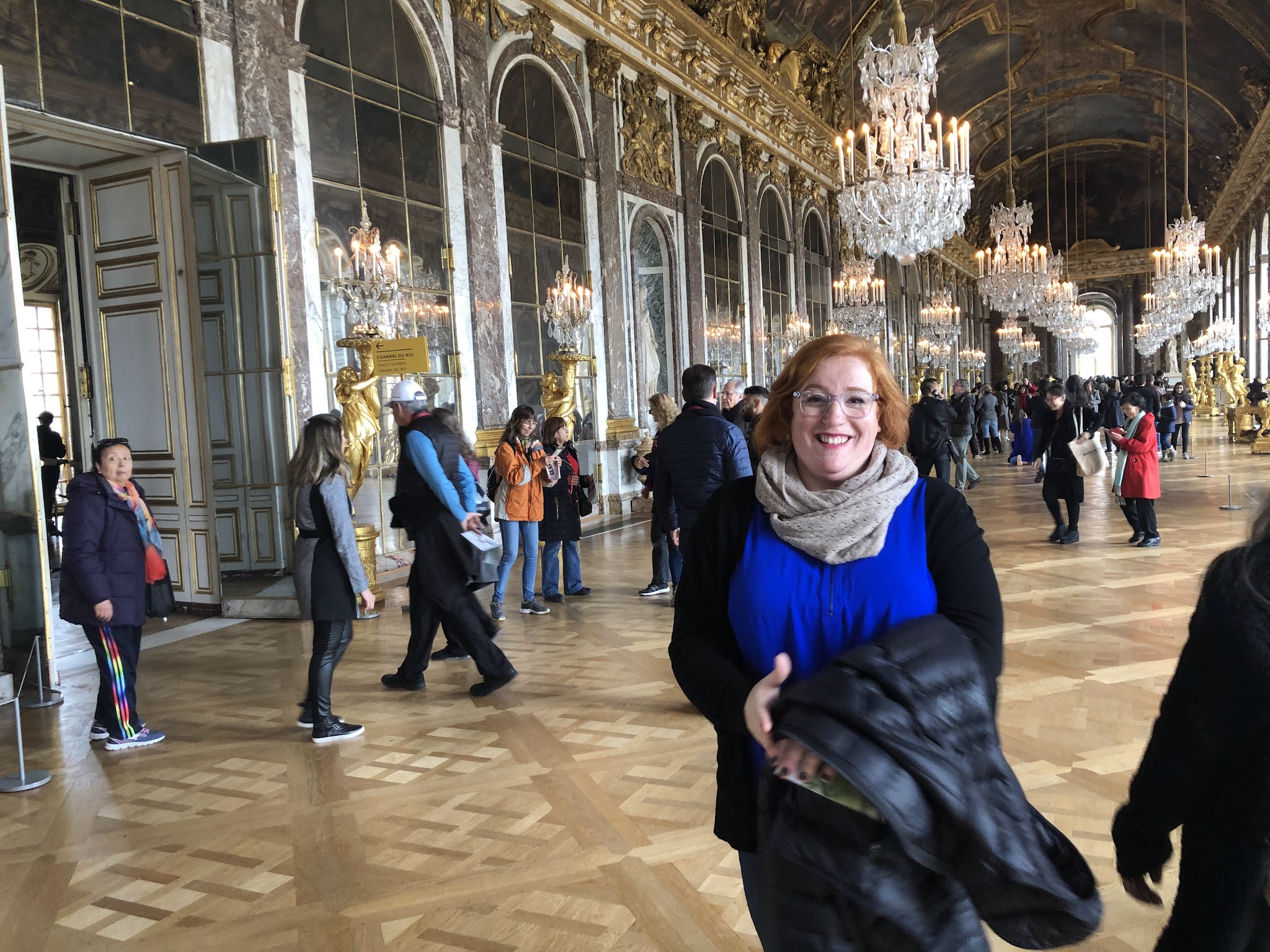 I think the look on my face says it all. It’s size really is one of the most impressive parts. I know that so much of this room must have been renovated. The chandeliers are definitely not original. Still all together they created an impressive and beautiful effect.

This might also be the king’s bedroom…I was never quite sure. The signs were all in French!

Another exsquist and weirdly secual painting. I mean look at that mustache. 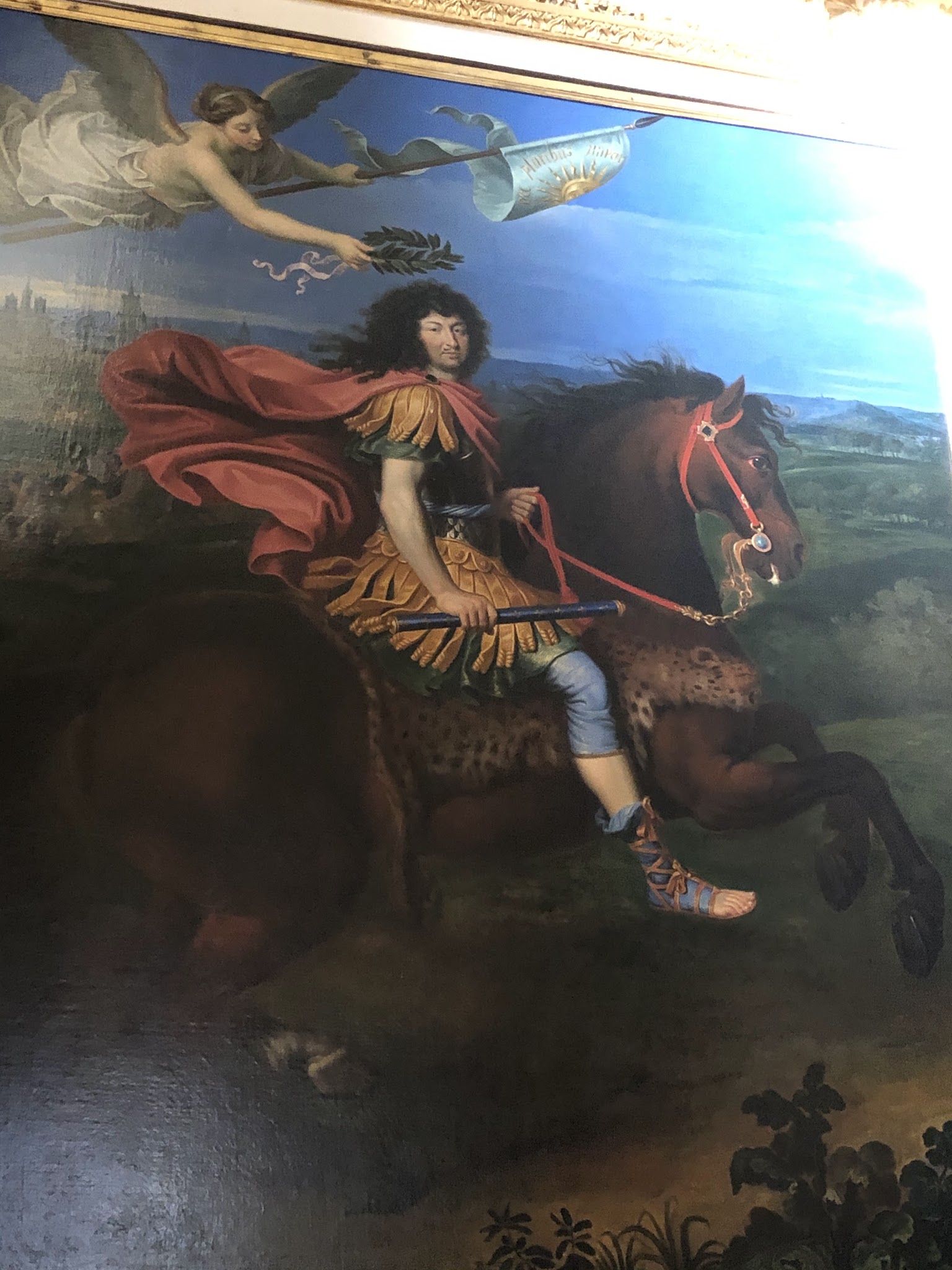 Back to through the south end of the Hall of Mirrors.

On to Queen Marie Antoinette’s bedroom. It had a beautiful view of the garden. 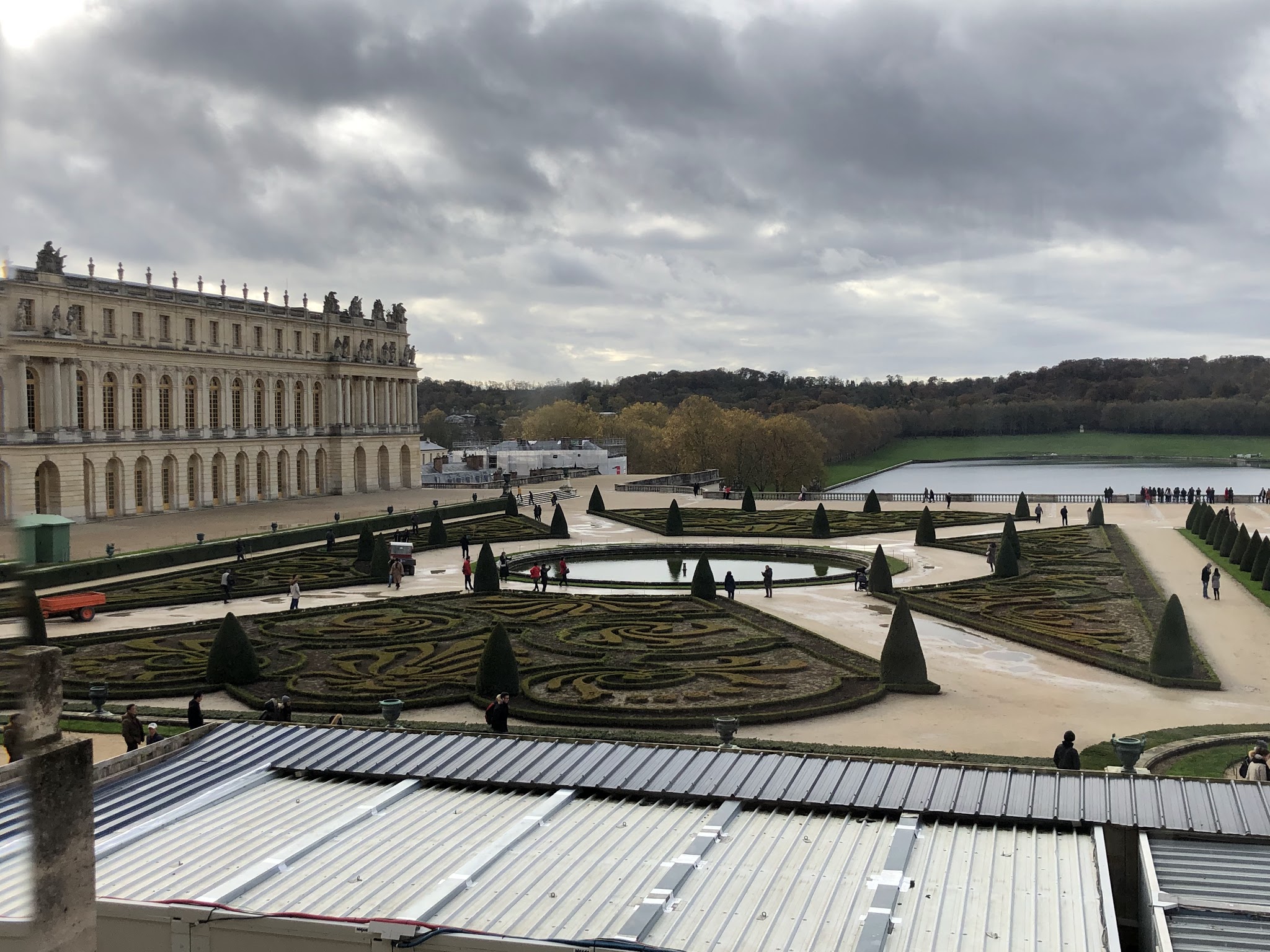 Really an insanely beautiful room. Her mother framed on the right, always looking over her.

Past this room we really start to see the Neoplianic infulance, and the turn from French Rococo, to Neo Classical.

The hall of battles.  America even made it’s place here, in the form of the Battle of York Town.

Past this room were more sculptures. Most carved out of single pieces of marble. Some plaster.

This one was my favorite of the day. The textures achieved with her hair, colar, and the fabric of her clothing is absolutely stunning.

We went to the cafe at the Palace. And grabbed a light lunch to go. My first eclair of the trip…in the Palace of Versailles.

We had decided at this point that we would head outside to tour the garden and the grounds. But not before touring more Napoleonic art.

Outside, we were met by breathtakingly manicured gardens. Even in November it was stunning.

The grounds were absolutely massive. So we splashed out and rented a golf cart. We finished our sandwiches are we leisurely drove around the park.

The size of the grounds was overwhelming, and again we were reminded of the poverty of the era, and how opulent this was, especially in it’s new days.

The golf cart had speakers that narrated the places we were seeing along our way. Our first stop was the Petit Trianon.  Up the drive.

It was certainly so small compared to the palace itself. And after walking in room after room, it was truly a breath of fresh air. This is where Marie Antionette lived any time she could. She hated palace life, and this was her sanctuary. 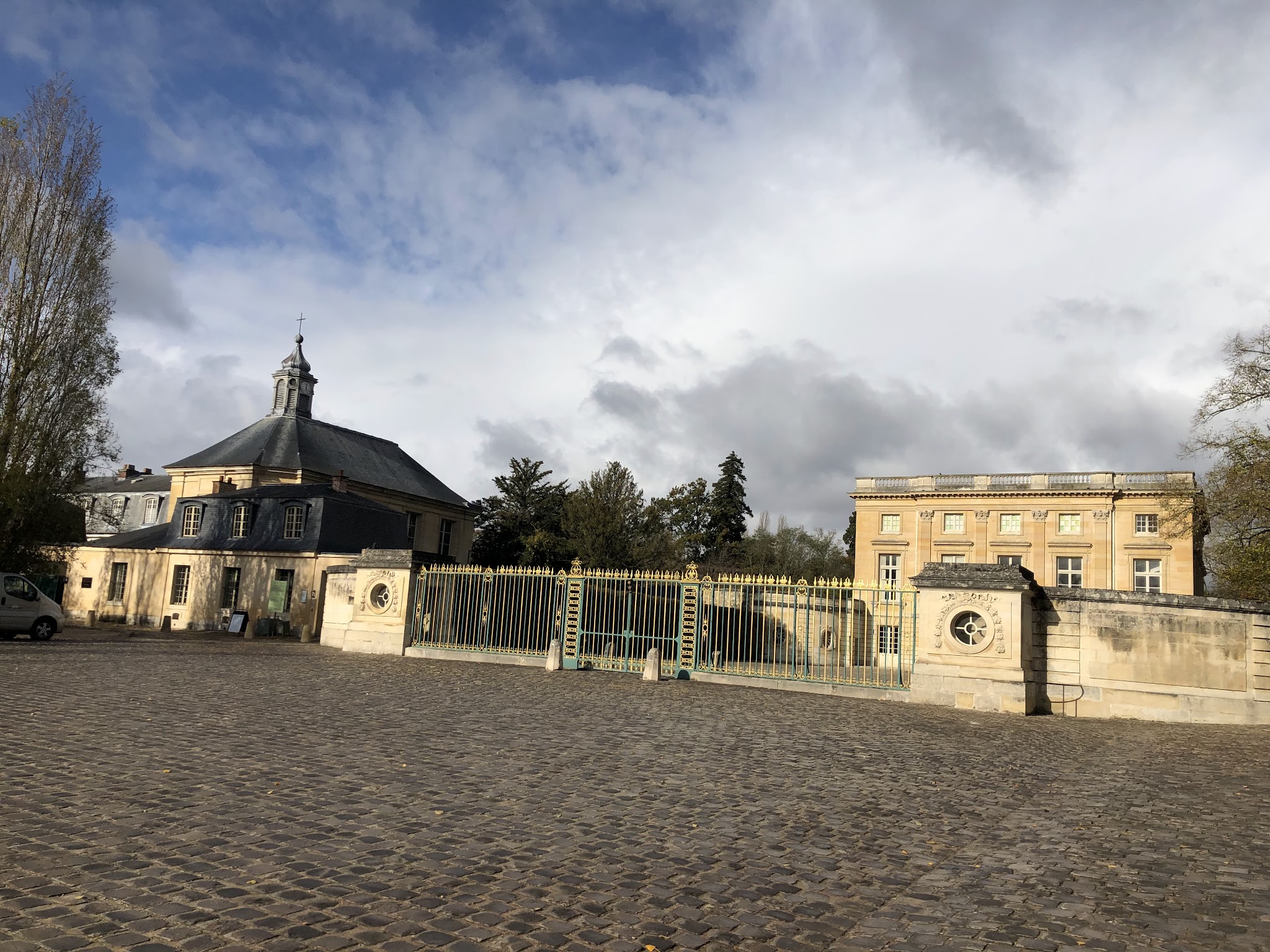 The kitchen and cold storage. I would love this kitchen.

A few sitting rooms, and a beautiful bedroom that I forgot to photograph, but small, beautiful, and simple comparatively. Then we drove to the Grand Trianon. This is where King Louis the 14th housed his mistresses.

Still huge gardens, and sweeping orchards. It is massive, but again seemed so tame compared to the main palace.

Back in the cart, our time was running out. Here  in the Grand canal they held mock Navel battles, in an effort by Louis the 15th to get his son and heir interested in Navel pursuits.  The turn toward the palace… 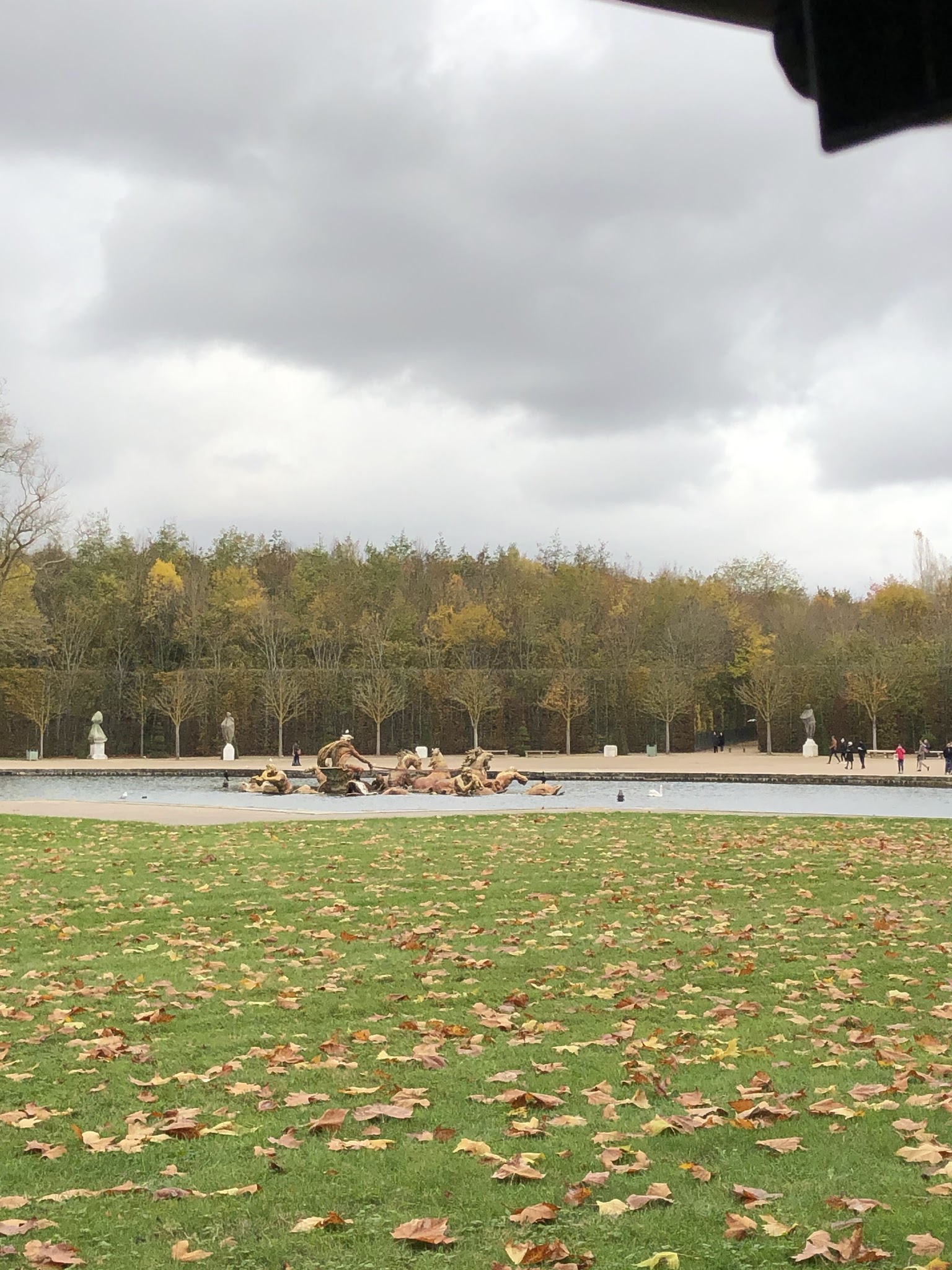 Here we were running out of time, and a bit lost trying to get back to the place we got our cart. Karl was driving as fast as he could, and realized that going backwards was MUCH faster than forwards. So he started just driving backwards in an effort to get there more quickly.

Then it started pouring rain, and hale.

Trying to turn in our cart was a nightmare. All the papers we had disintirgated in the pouring rain. We were both SOAKED to the skin by the time we were done. 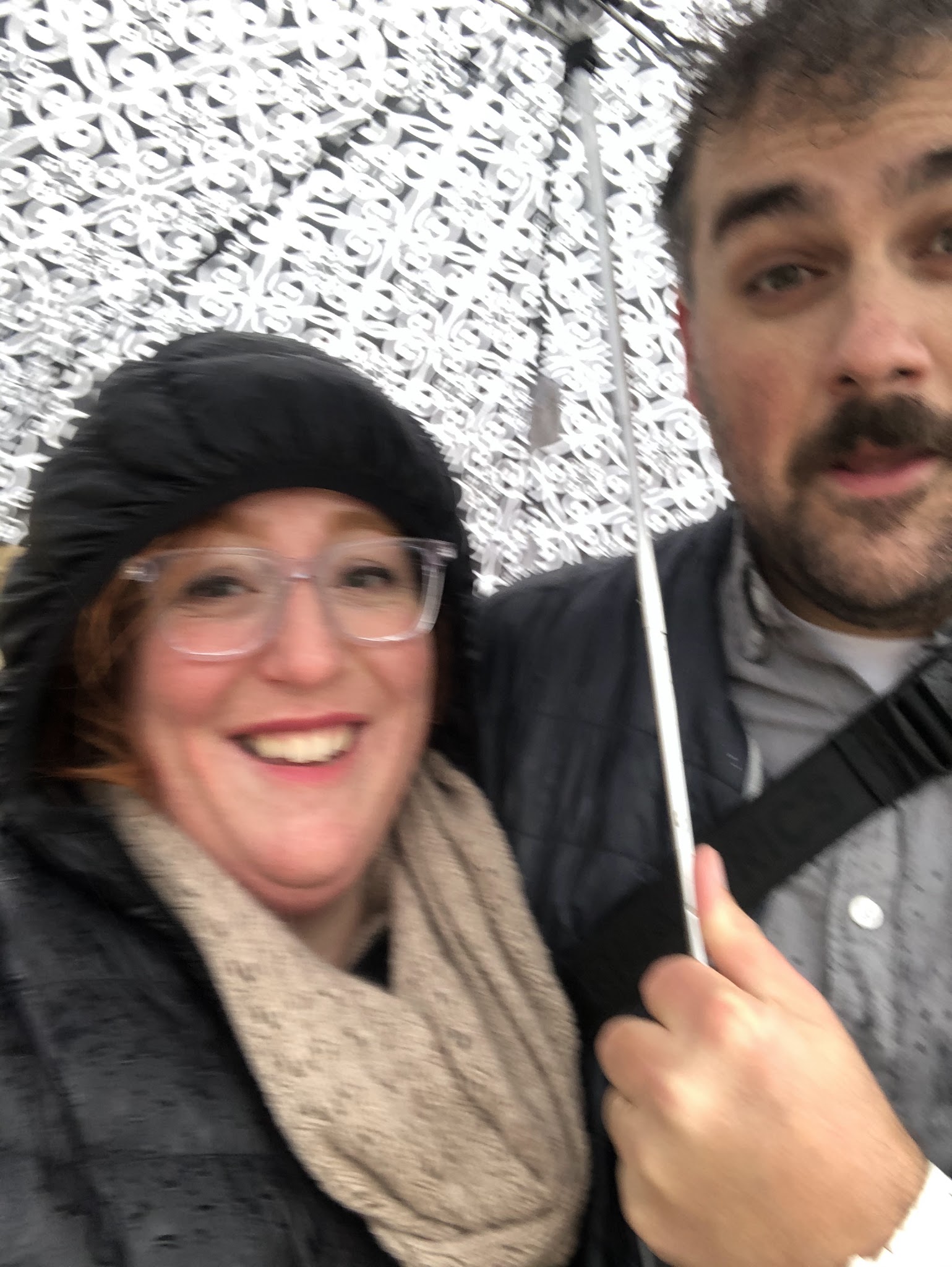 Still, look where we were. We had planned to spend a little more time there, looking around the gardens, but we were too wet and cold. We had even planned on stopping by the Paris temple to give it a look, but at this point, we just wanted to get back to the train, and back to our hotel, and dry.

The line of people waiting to get in as we were leaving. 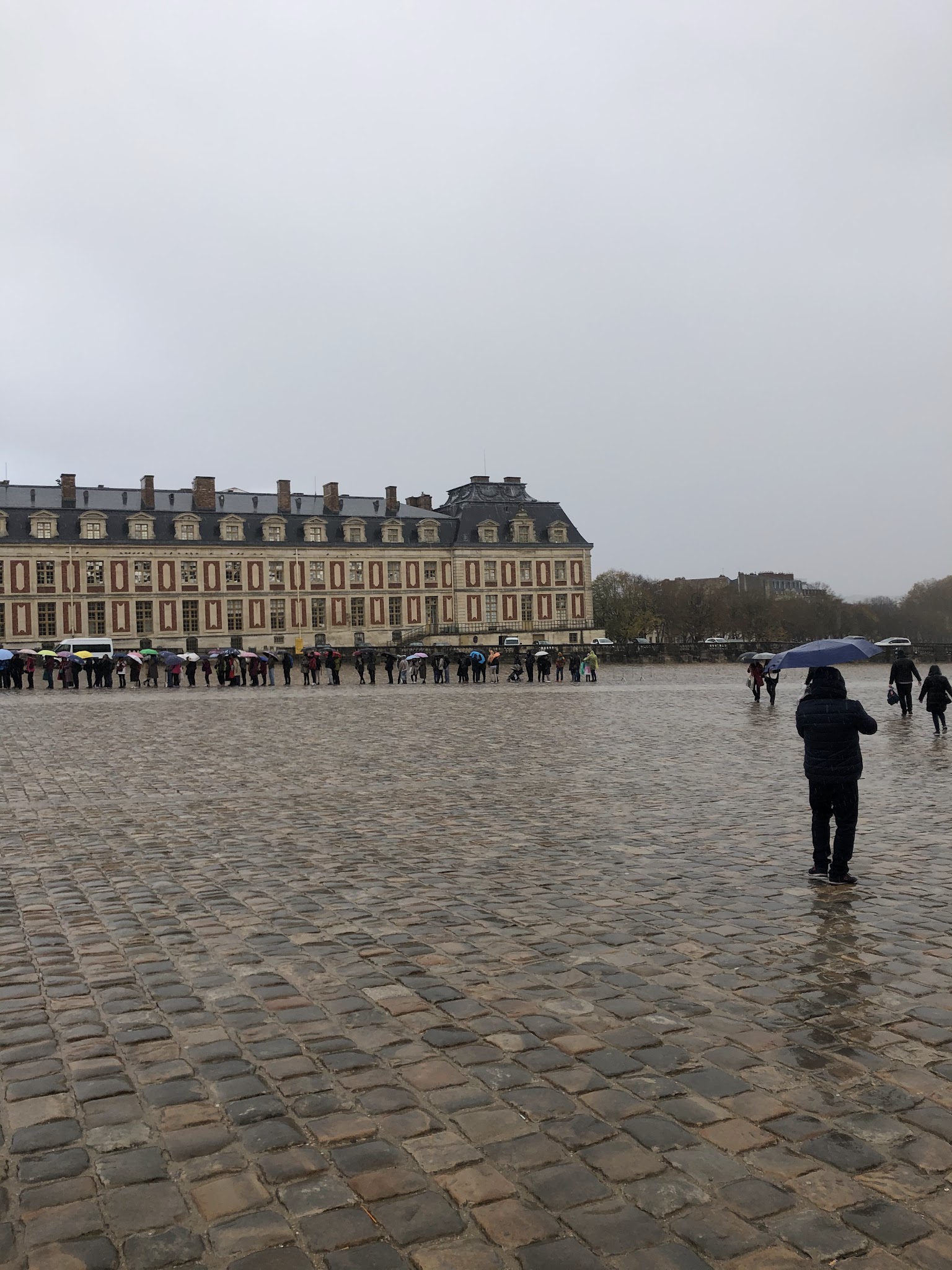 Me telling the kids all about it.

We huddled under the one tiny umberella my mom had given to us as we left for our trip.

By the time we got back to the city, the skies were clear. 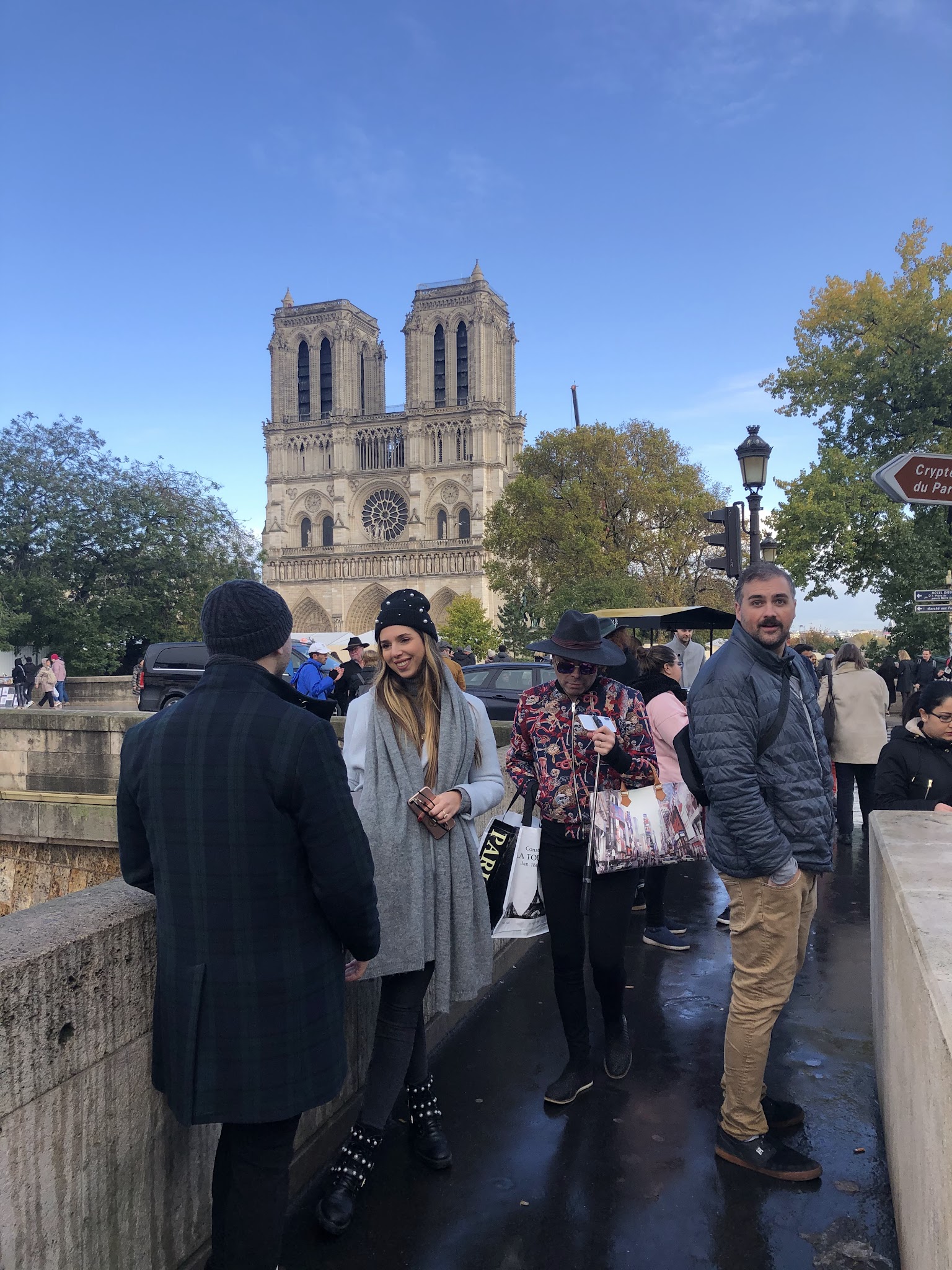 We were mostly dry at this point, and Karl wanted a snack. So we went to a bakery that we had seen on a Youtube channel a year ago…La Maison d’Isabelle.

Let me tell you it did not disappoint. The best croissant, the best pain au chocolat, the best baggett of the whole trip!

At this point, I just wanted to lay down. So we casually walked back to the hotel.

We found this fun over priced shop on the way. 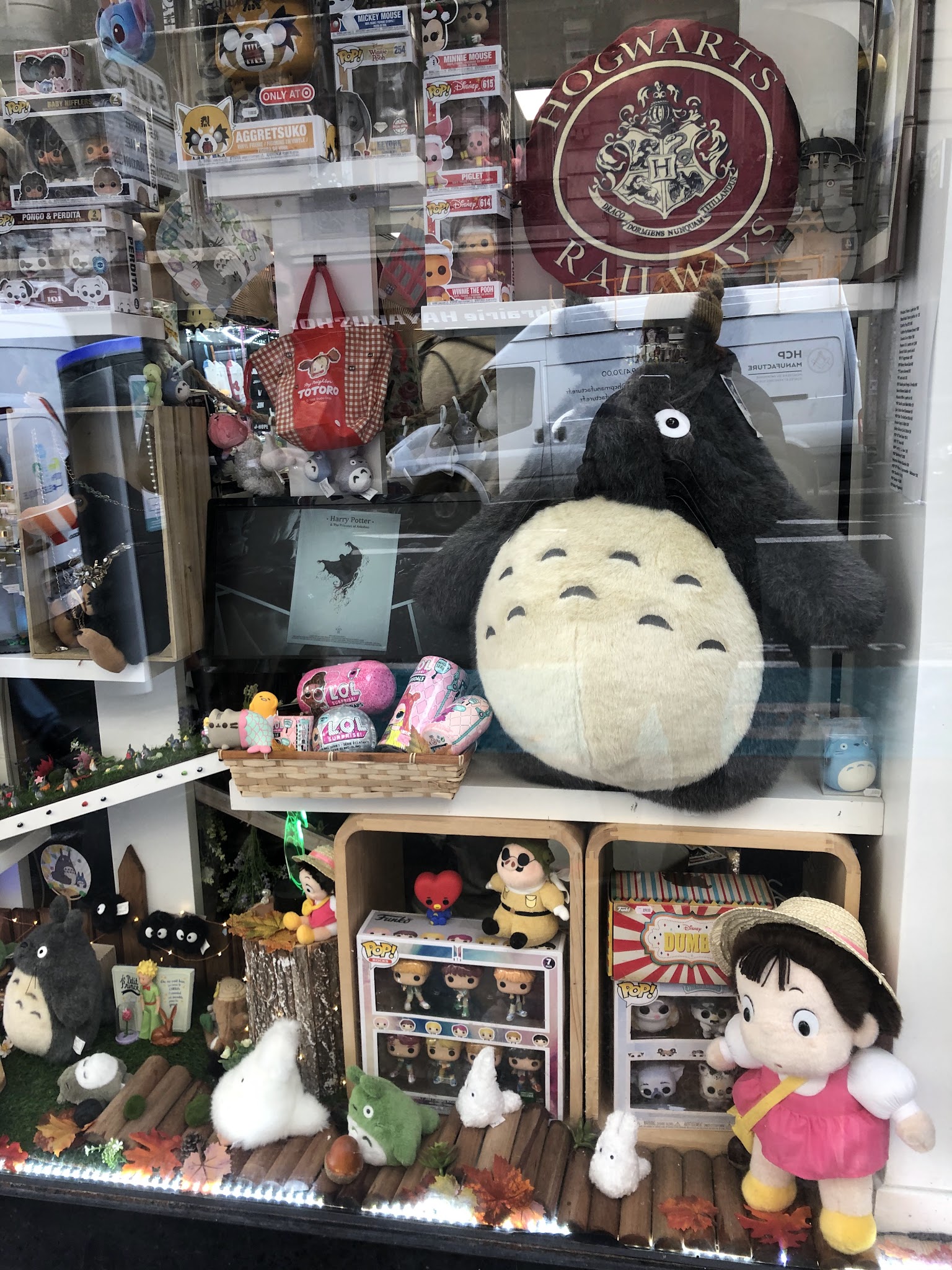 We went back to the hotel, changed, napped, and the headed out again for dinner of sichuan noodles, and soup dumplings. Karl found the place, and it was a joy!

We walked around the neighborhood, and enjoyed the friend stands and juice shops. 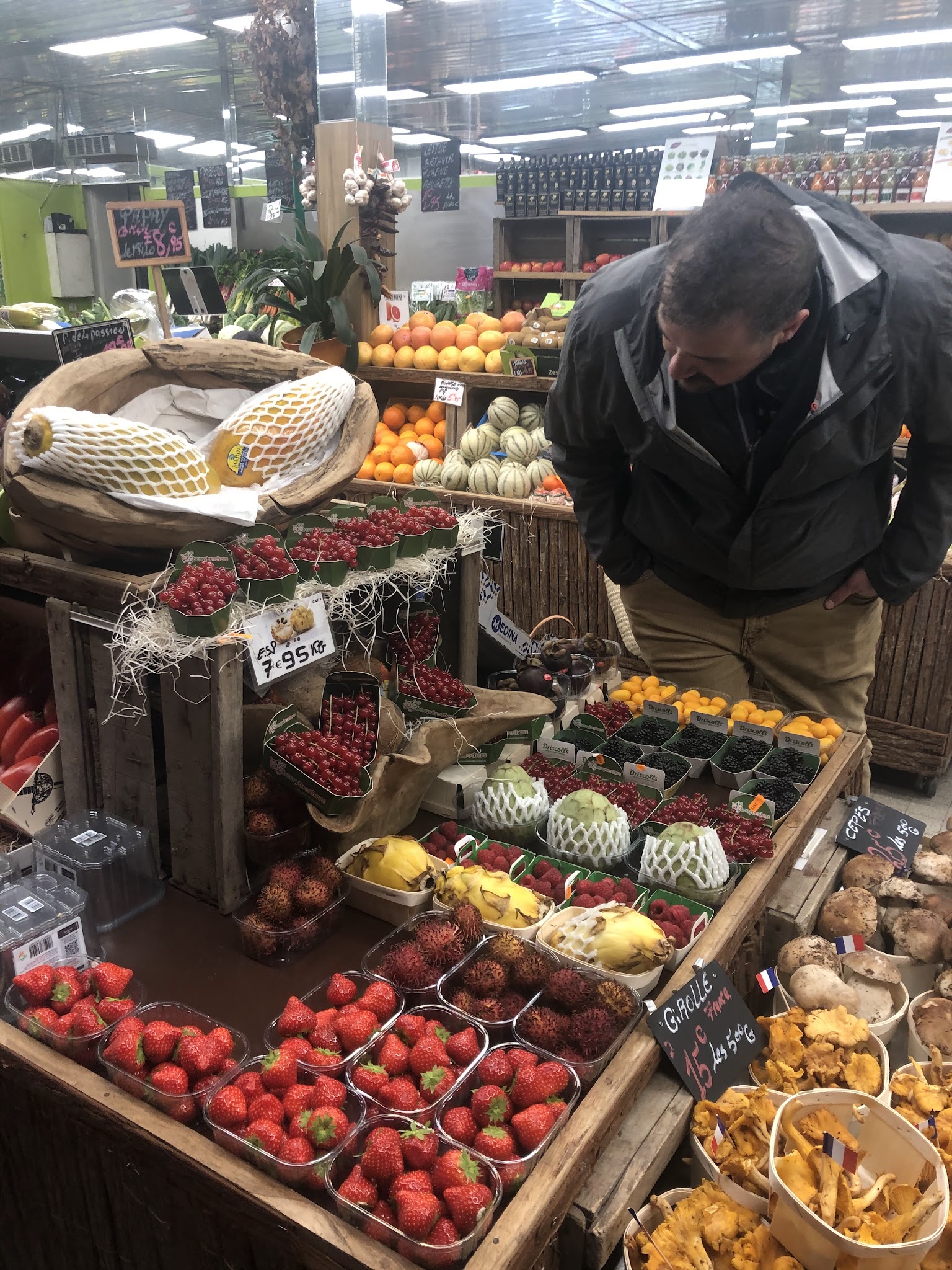 A few blocks from home, we found another bakery, and we had to stop.

This beautiful strawberry tart was worth every Euro.

This is the Polo we sent the kids at the end of the day. It had been a long one. But so wonderfully filled with food, laughter and experience we were punch drunk happy.