The scary day had finally come. My mom gave me this advice: “Don’t be freaked out, it will only freak her out.” 🙂 My mom knows me so well. The feeling in the house that morning was…quiet and nervous. We hadn’t left the house this way, you know in a routine, being away from each other at all, to be among strangers in big groups, since March. I didn’t sleep well the night before. Mirah was up, and dressed by 7:30. We made breakfast, and had loads of time to take pictures out front.

Yeah, she has a little bit of toothpaste on her face, but she is perfect, and wonderful and I lover her so much. 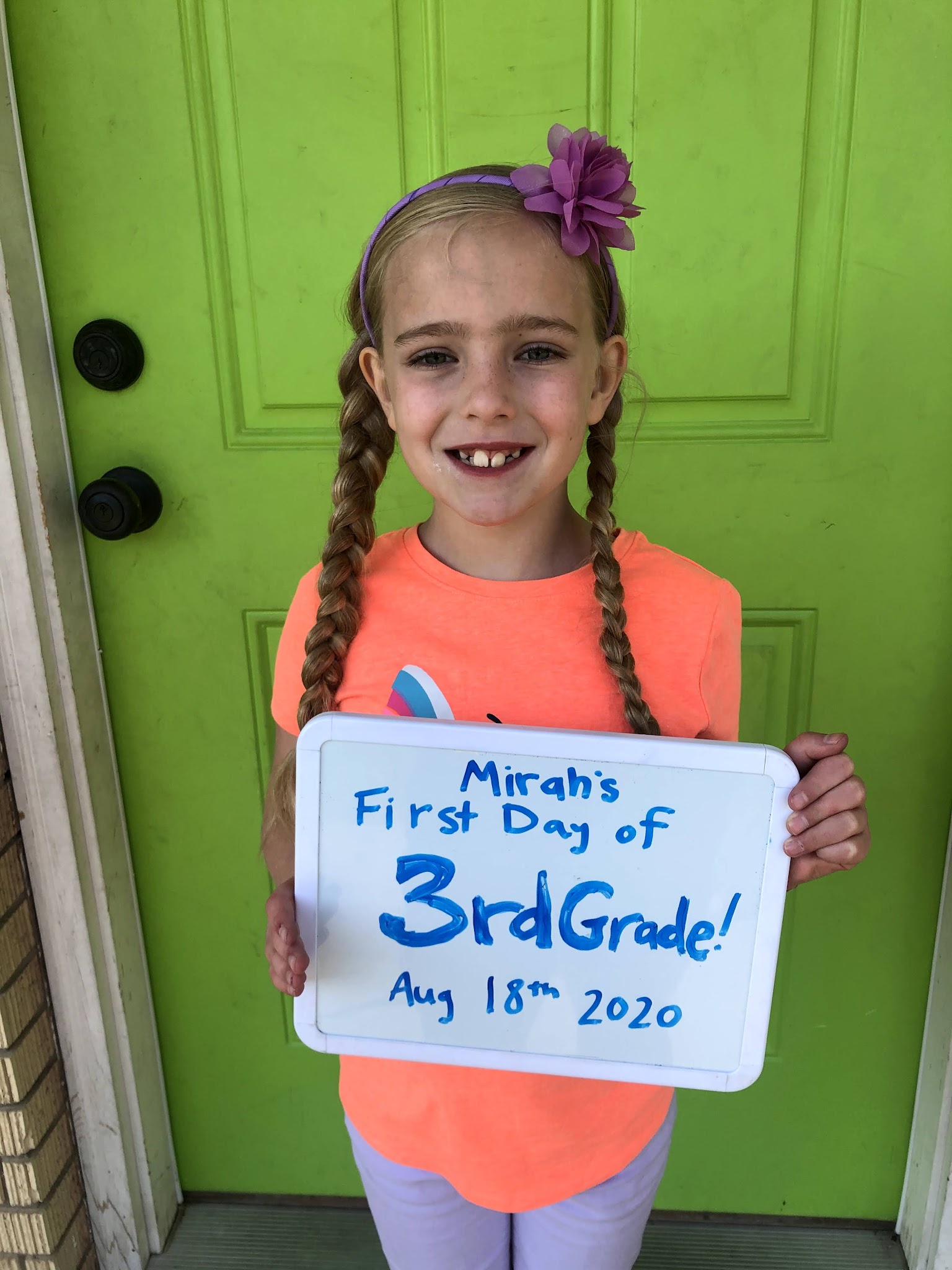 We arrived at the school early, so we waited in the car. Maryn called as we waited for the gates to open! Mirah was thrilled, and it helped with our nerves.

Maryn wished her luck, told her she was amazing and that everything would be great.

Here we were…getting out of the car.

They did the red carpet thing like they normally do, but it was all much more subdued.

More and more children  started to arrived, and Mirah’s buddy Mimi and Farah were there too. Neither one of them would be in her class this year, but that’s okay, they still have recess. 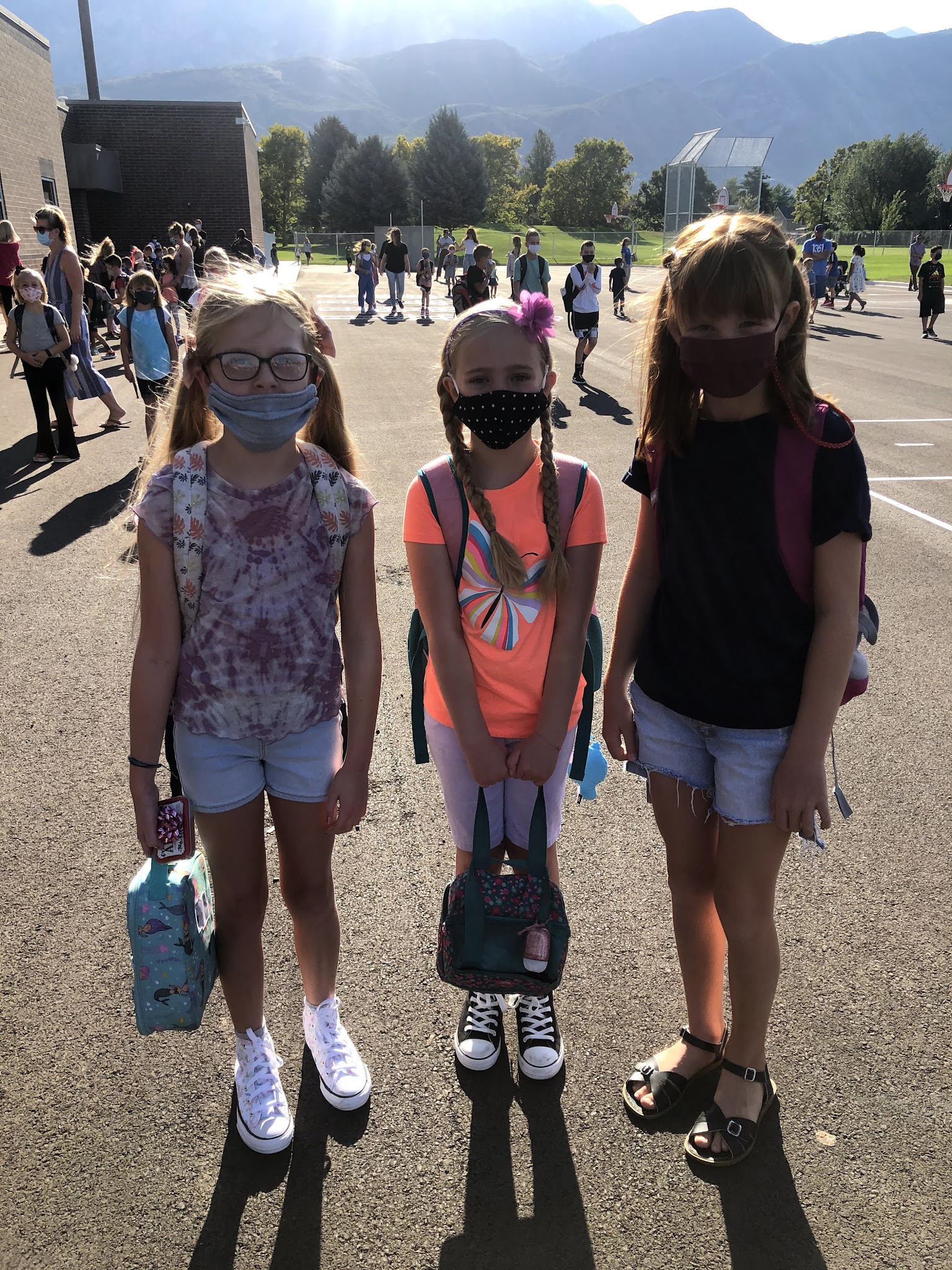 Mrs. Keil and Mr. Lui arrived and the kids got all lined up. 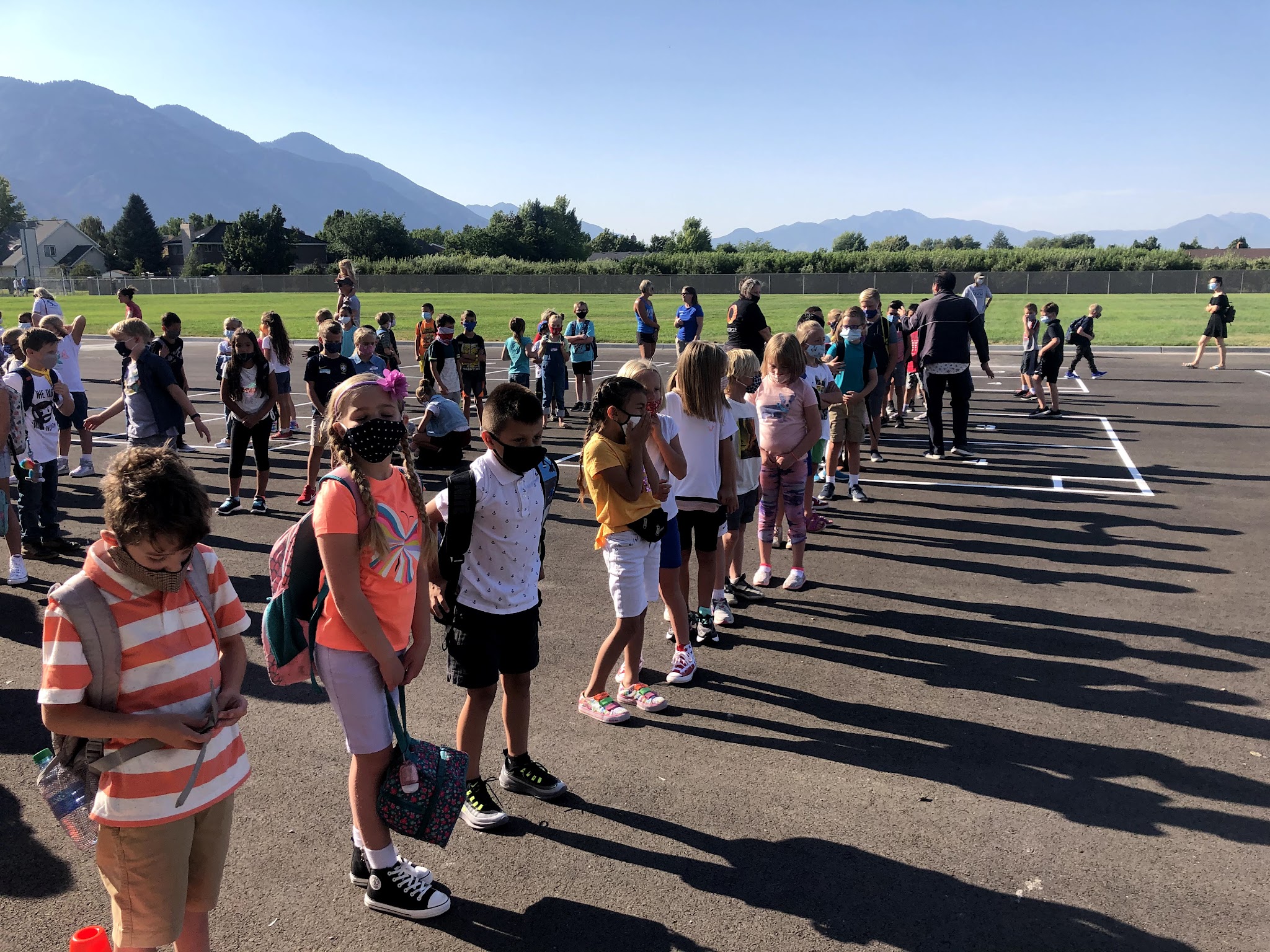 Oh my goodness there were SO many kids. And people. And dumb parents NOT WEARING MASKS!!! 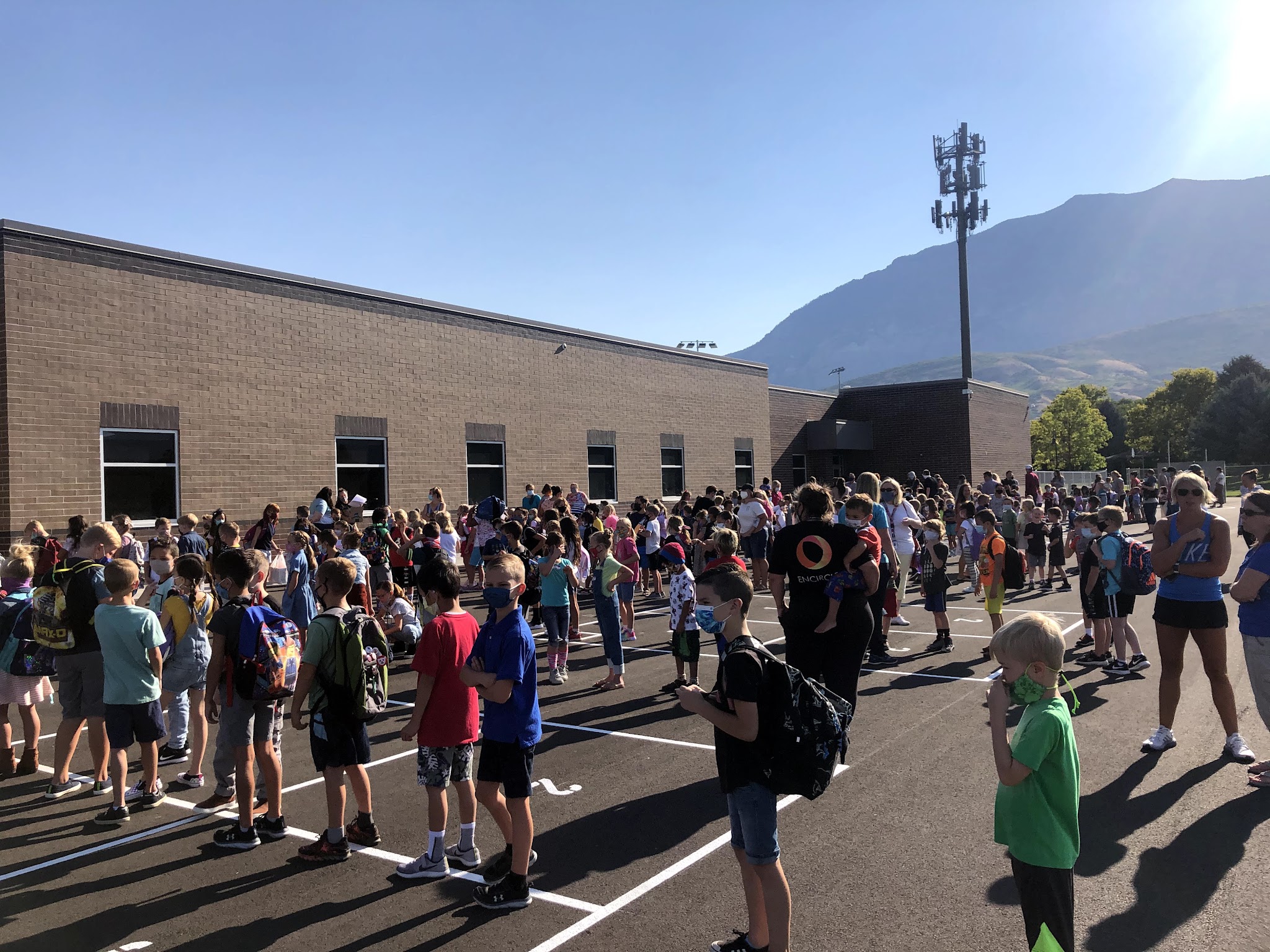 It felt like leaving her at kindergarten all over again. I wanted to cry, like really cry. But my mask thankfully hid my face.

When I picked her up that afternoon, she had lots to tell me about!

After school we went to Sodalicous and got cookies and popcorn and soda as she told me all the details. Traditions.

Then that evening she had lots to tell dad too.

The news was mostly good. Everyone wore masks, everything was very organized. HOWEVER, the didn’t have the kids wear masks when they were going to recess, going to PE, or walking in the hallways. We were especially horrified when she told us that their teacher made them take off their masks and leave them on their desks. Mirah said she wanted to keep her mask on, and was going to do so, but then a kid that was in the line ahead of her tried to keep his on, and the teacher yelled at him to take it off. So she quickly stuffed hers away. This was NOT okay. What’s the point of wearing a mask if you are going to all be exposed to each other multiple times a day anyway?

That evening, I was stressed, and Karl and I talked in our room for a while. After a long discussion, and doing some research online about the state health mandate, I asked Karl if he would email to her teacher, and he cc’d her principal I wanted to say SO much more but he kept it simple and direct:

My daughter is excited to be back at school and practicing her Mandarin!
Her only concern was that she wasn’t allowed to wear her face mask as much as she wanted to. Specifically, she said that you required the students to leave their masks in the classroom before walking in a line to lunch. She wants to wear her face mask in the hall (UPHO 2020-10 also requires it) and during recess.
Would you please allow Mirah to wear her mask while walking to lunch?
Thanks a bunch!
Karl Hite

Mr. Johnson, Mirah’s principal, called Karl within 15 minutes of sending the email. He was completely unapologetic. He brushed aside all of our concerns, and told us that Mirah misunderstood that teacher “yelling at the other student” and that the kids are allowed to wear their masks if they want to. He said, that the training they got from the Nurse at the County Health Department is that it take at least 15 minutes for the kids to transmit the illness to each other, so if they have their masks off for a few minutes they will be fine (!!!!!!!!!!!!!!!!!) Karl sighted the state Health Order, but he just brushed it off.

That was really frustrating.

The next morning Karl called the Assistant Superintendent that is over our school. He also passed the buck onto the County Health Department Nurse. So Karl called her, and left a message. Then he left a message on the districts “see something say something site” He also contacted the state Health department, and then may have contacted the local news about it…who can say?

Mirah went back to school. There was an announcement that day at school that students are allowed to wear their masks whenever they wanted. They were not required to take them off. They didn’t change their policy about kids not wearing them in the hallway…UNTIL Friday. When Mr. Johnson called ME. Not Karl, me. The whole reason that I didn’t email is because I have a relationship with him, and its all SO political. I didn’t want to get on his bad side. So when he called me I was SO tense. He said that after some consideration, they were going to get a little stricter about the mask policy. That they were going to require students to wear masks inside the building, except at PE. The children would still be allowed to have them off when they were at recess, and any time outside, and Mirah would still be allowed to wear her mask anytime she wanted. He said he didn’t want to make things political. My calm reply was that I just wanted the school to stay open, and the more careful we were, the more likely that would be. We both agreed that we wanted to school to stay open. We were able to end the conversation on a positive note.

How do I fell after all of that? Worried, but okay. Glad that the school made improvements. Sad that it was so hard. Hopeful the school will stay open.

Mirah was just so happy this week to be back in school. She has been happier than I have seen her in months.