I have been a huge fan of the Aquabats for years. I fell in love with them in 1996 when my brother bought their album.
As an LDS girl raised in so cal, there was nothing for it, I was born to be a super fan.
I have never been to a show, and here I am, 20 years later, seeing them for the first time in concert. The show was free, in the down town roof top concert series.
First thing was first:
I got myself a shirt!

We grabbed dinner on Banh Mi on the road, and Malia got sushi at one of the Japanese places on center.

There were two openers. The second one was My Man Friday.

At this point there was room to breath and eat and enjoy.

My Man Friday, were great. But we were all getting exicted to see the main event.
Aquabat Signal!

There were a lot of kids at the show. Here was a three year old girl on her dad’s shoulders doing her version of the Aquabat Signal.

Intro by the mayor.

AND THEN it began!

As Super Rad started, I almost started crying in excitement!

One of my most favorite songs ever.

A song I had never heard, Shark Fighter.
Super fun.

And the shark fighter was Rhys Darby himself!! 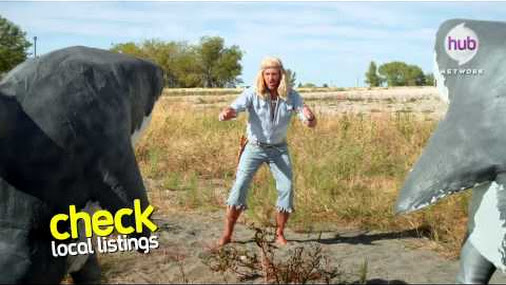 Then another one of the hits, Martian girl!

A fight on stage with the California raisins!

Friday was pizza day, the best day of the week!

They threw hug pizza rafts into the crowd, which people then crowd surfed on.

SUCH a great show!