Happy 2016!
As a mother of young children, we did a duel party new years eve. One for the kids, and one for the adults.
The night started with a delicious mushroomy Stroganoff for dinner then treats and the King Julian Count Down. Our snacks were popcorn and M&M’s. 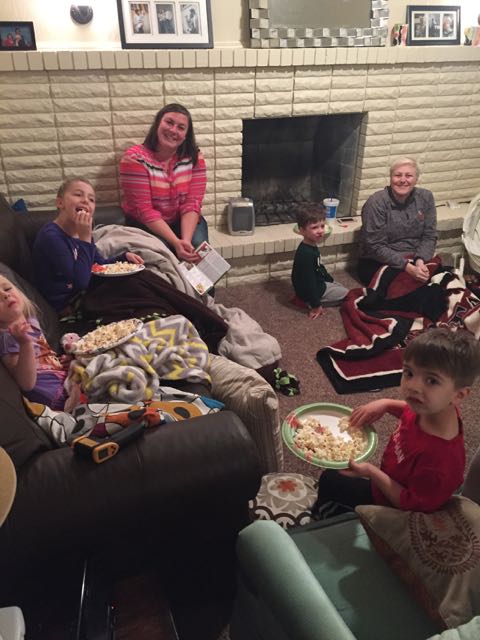 Everyone was all comfy and snacky and ready to go! 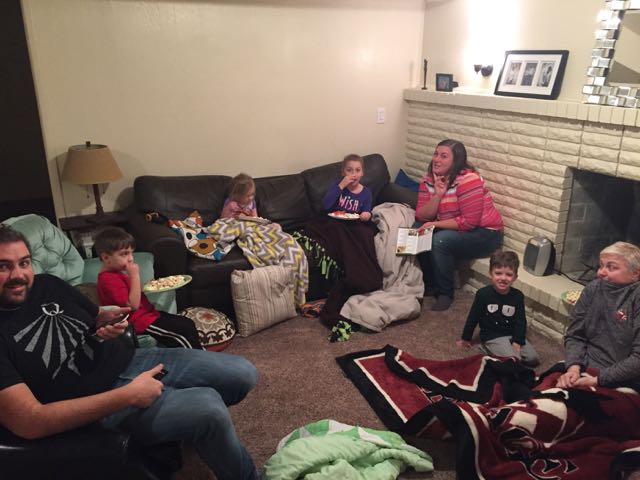 Mirah and her Lamby. 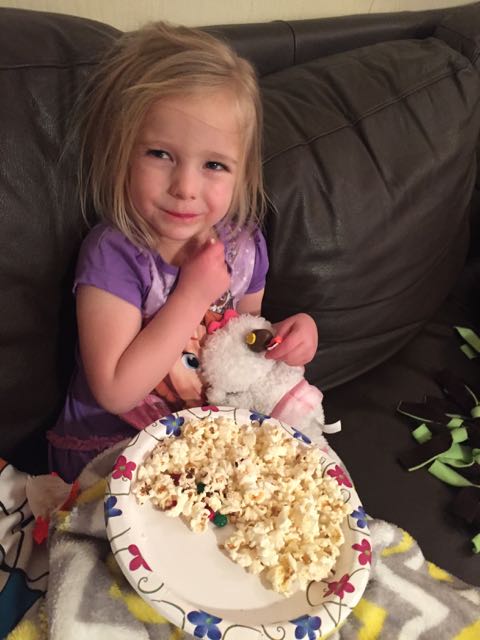 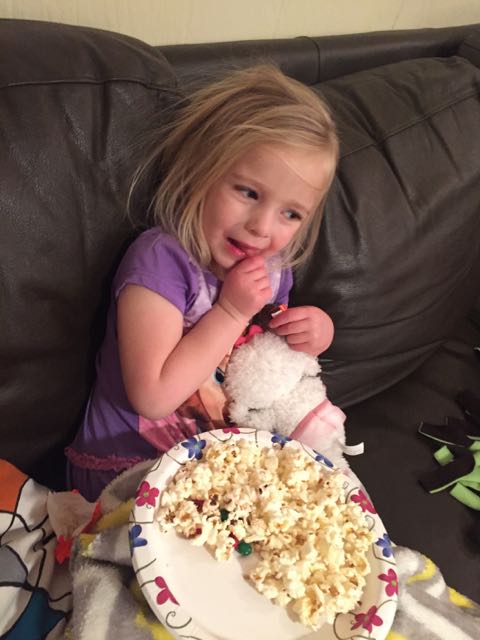 The idea behind the video was pretty cool. It is a way to do the new years countdown without having to stay up until midnight with the kids. There were also other’s to choose from. This year there were 6 different videos:
Care Bears and Cousins
Puffin Rock
Peabody and Sherman
Inspector Gadget
All Hail King Julian
Project Mc2

We picked All Hail King Julian for reason’s unknown. 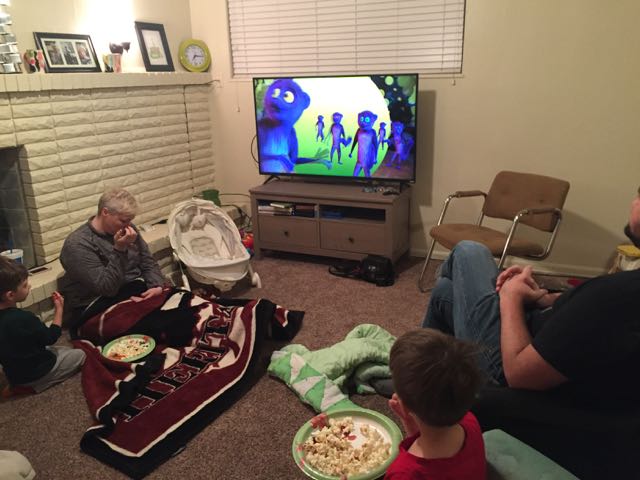 So after the countdown we but the kiddos to bed. Malia left with Judah and Asher, and Krysta put Karen to bed in the basement.

Around 9 Kami and Doug came over for a Nacho cook off and games.

The next day You Suck at Cooking submitted another way:

There was nothing for it, we had to have a nacho cook off to establish once and for all whose nachos were actually better.

Doug’s Method:
Doug started his pork early in the day, and cooked it for 10 hours before they arrived at 9:00 PM. 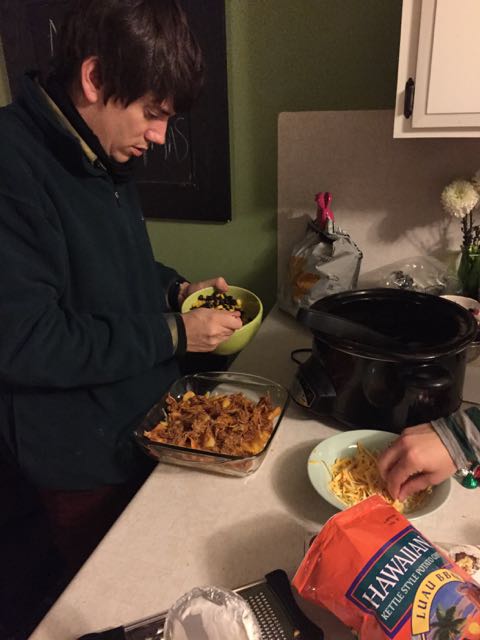 Instead of corn chips he used Hawaiian Kettle Potato chips, layered with Corn and black beans and a generous amount of pork and cheese. Two layers. 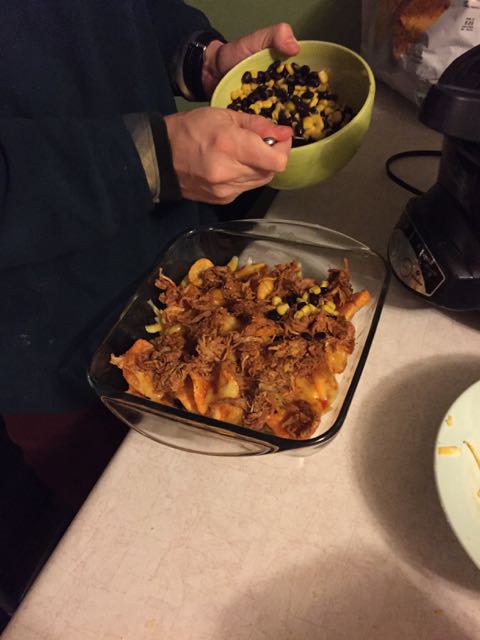 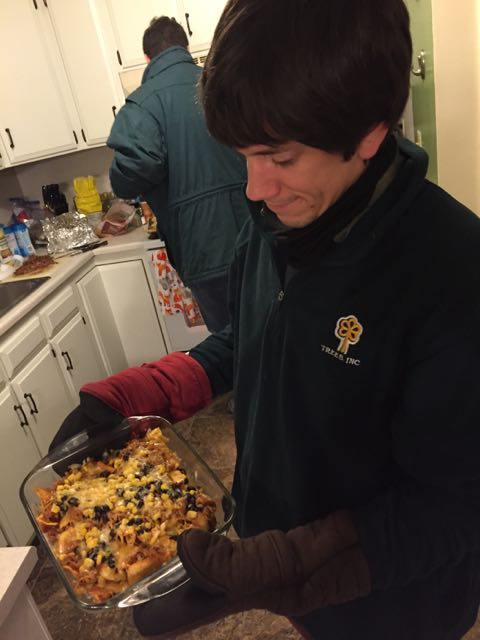 Karl’s method:
BBQ Imperial Valley carne asada imported from the imperial valley. Cook over open flames until it is medium rare. Then take meat and slice it against the grain in strips. Then take the strips of meat and put them onto tostada shells. Add LIBERAL amounts of shredded “Mexican style” cheese on top of the tosdada shells and meat. Bake until cheese is melted. 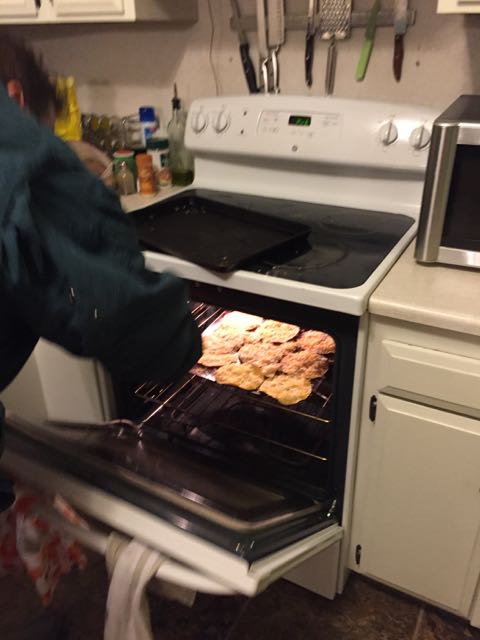 Oh yeah, this is the stuff. 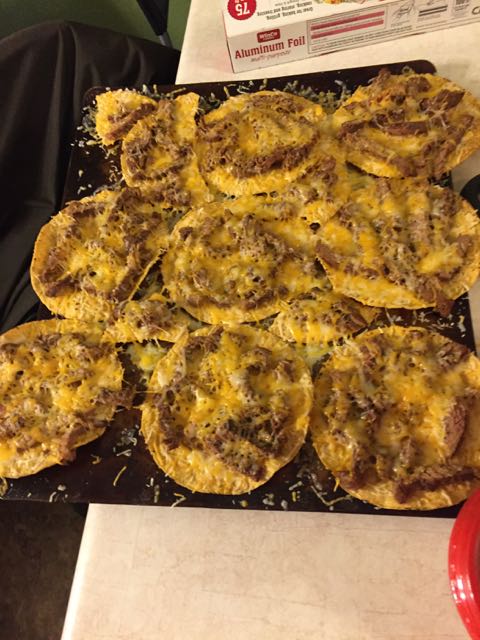 We had fresh salsa, TONS of home made Guac, and sour cream to top as desired.
The winner: Both of them.
They were so different and both so good, no one could say which they liked better.
Once eating was over, we plated games into the night. 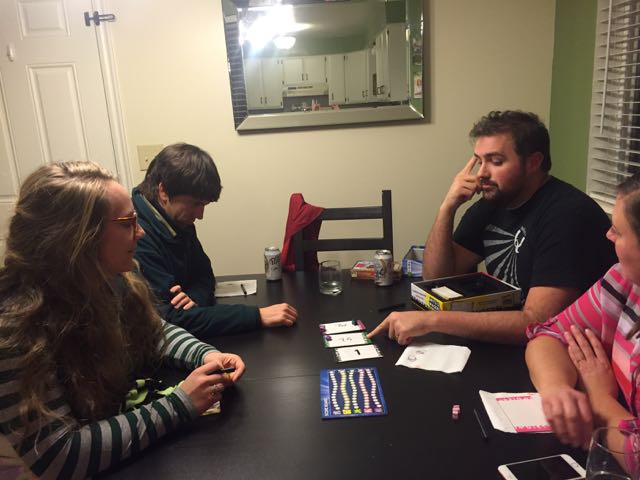 We had chilled some party juice in the snow out back and poured a glass out for everyone.
Then we counted down to midnight online. 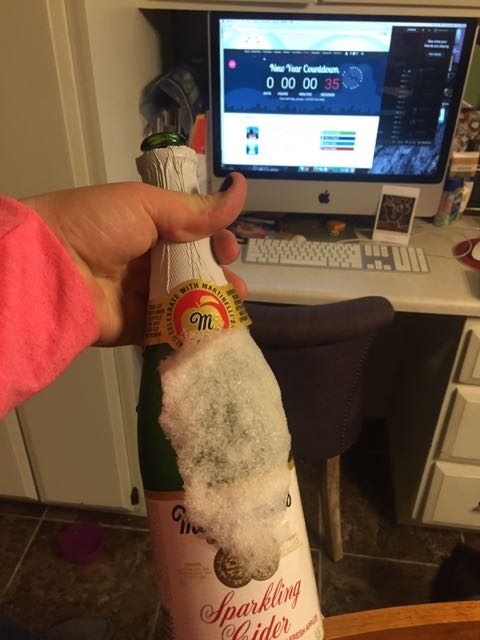 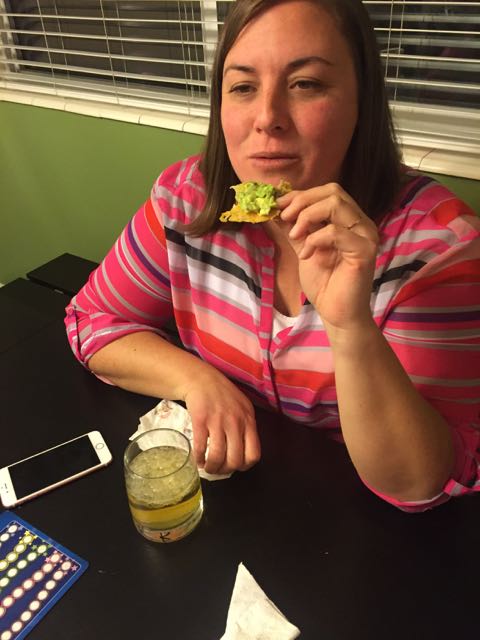 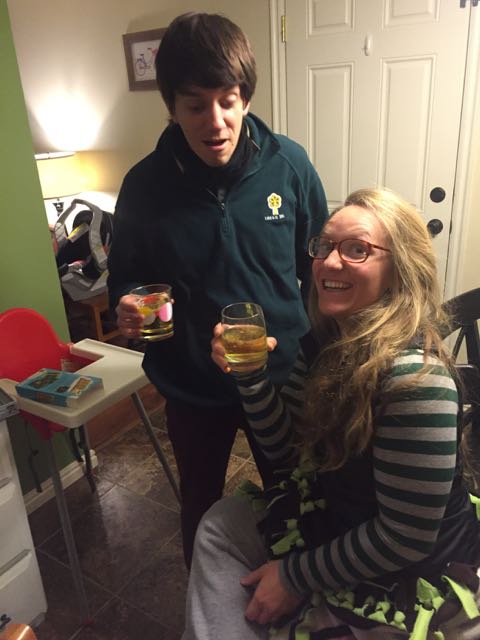 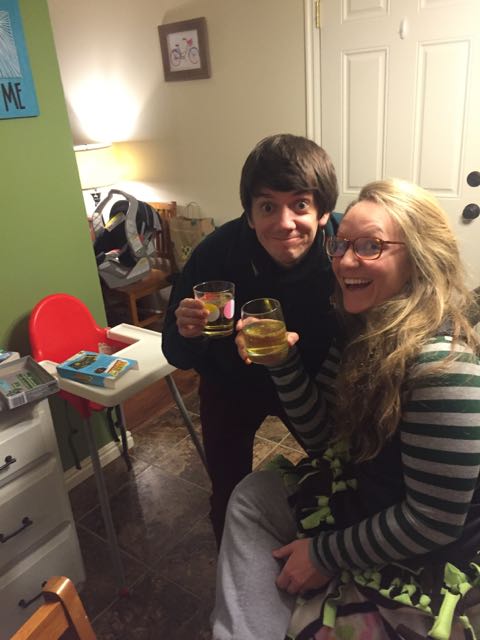 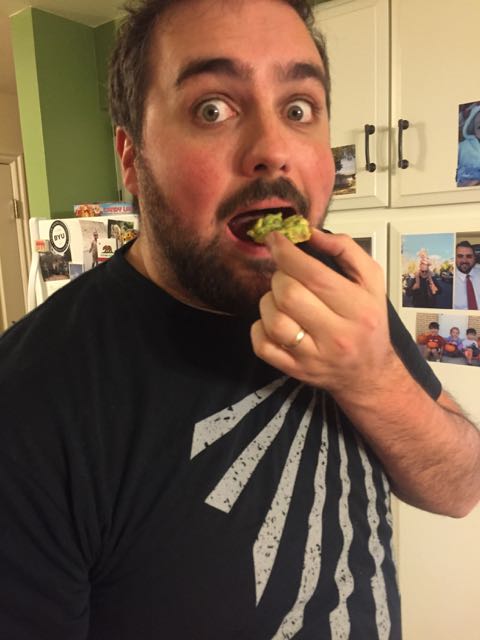 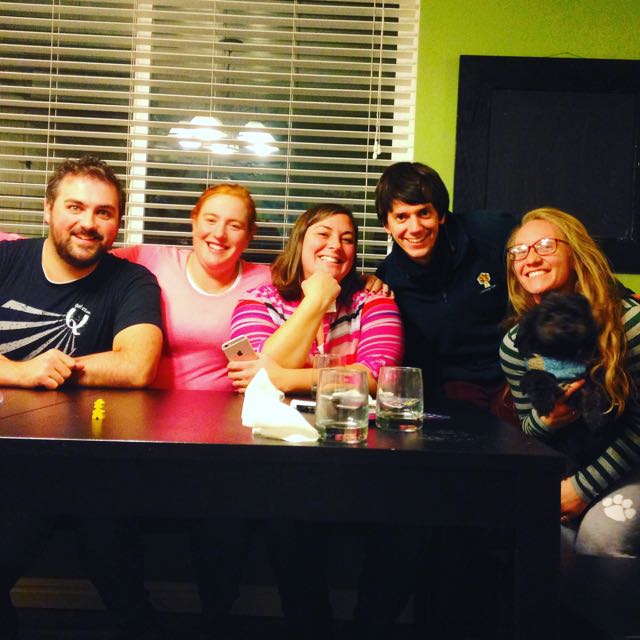 We played another game after the countdown, then said goodnight.
Karen and Krysta slept downstairs. We were all asleep by about 1:30
On New Years morning, we got up lazily, before 10:00 AM.
Wr got up, made breakfast, and played another new game with Krysta.
Epic Boss Fight 2!
When she left we lazed around some more. 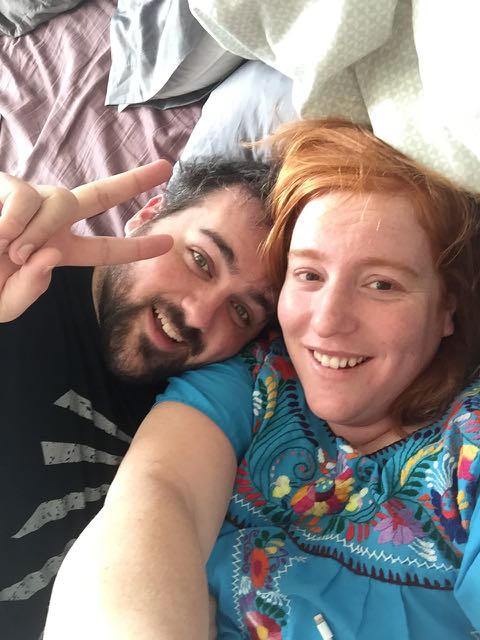 We met Nick and the boys for lunch at Carl’s Jr. so the kids could play for a while. 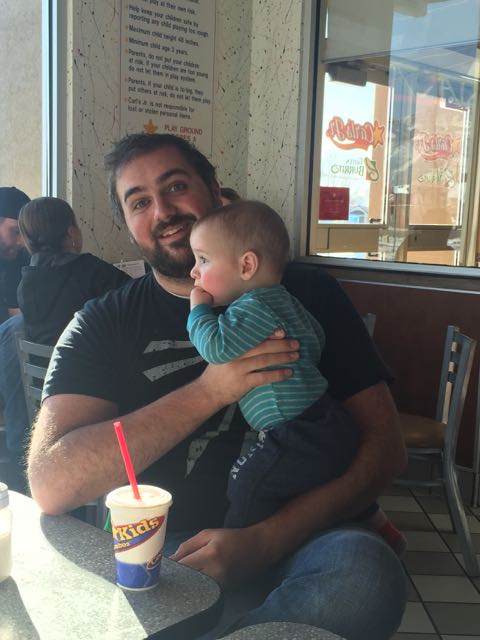 Then spent the afternoon at our house with the adults playing games and the kids playing downstairs.
Which is actually what is happening right now. 😉
Happy New Year y’all.
Here’s to a more healthy year than 2015.