Well, our first post COVID trip was finally here. And we were off to Boise to meet up with Belle, Adam, and Simon.

They left at 4 AM to take two planes to fly to Boise. By all accounts Simon did great.

Keeping him fed was the key. Here he is having some mango. 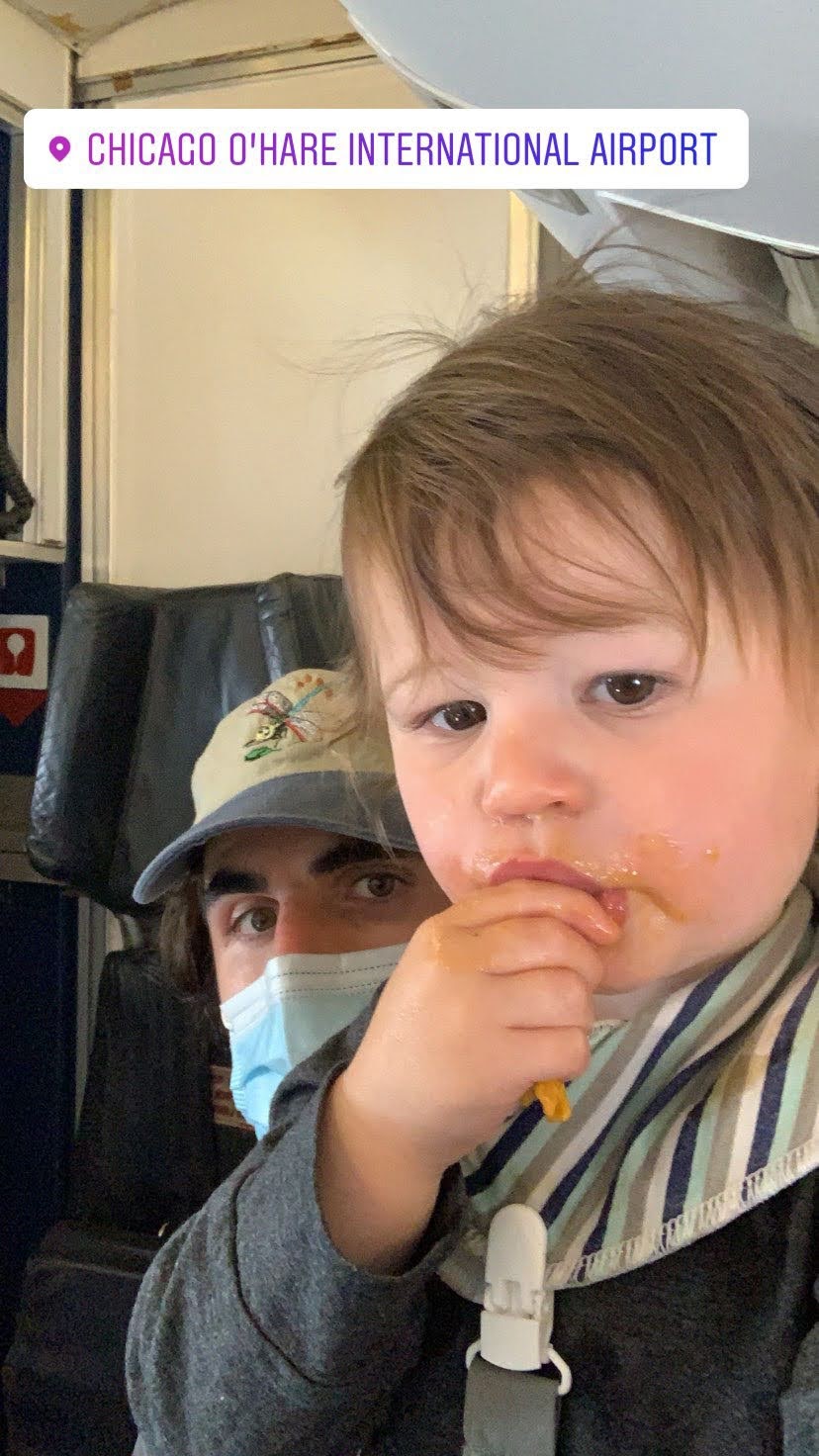 As we drove away from Orem, I checked their location, and they were on the tarmac in Chicago.

The trip to Boise is about 5 1/2 hours. It was a nice uneventful trip. We picked up mom at Thanksgiving point, and so she was with us for the haul.

We entered Idaho and an hour outside of the city we saw a sign for the Litster family law firm.

We passed the time talking listening to music and looking out the window. 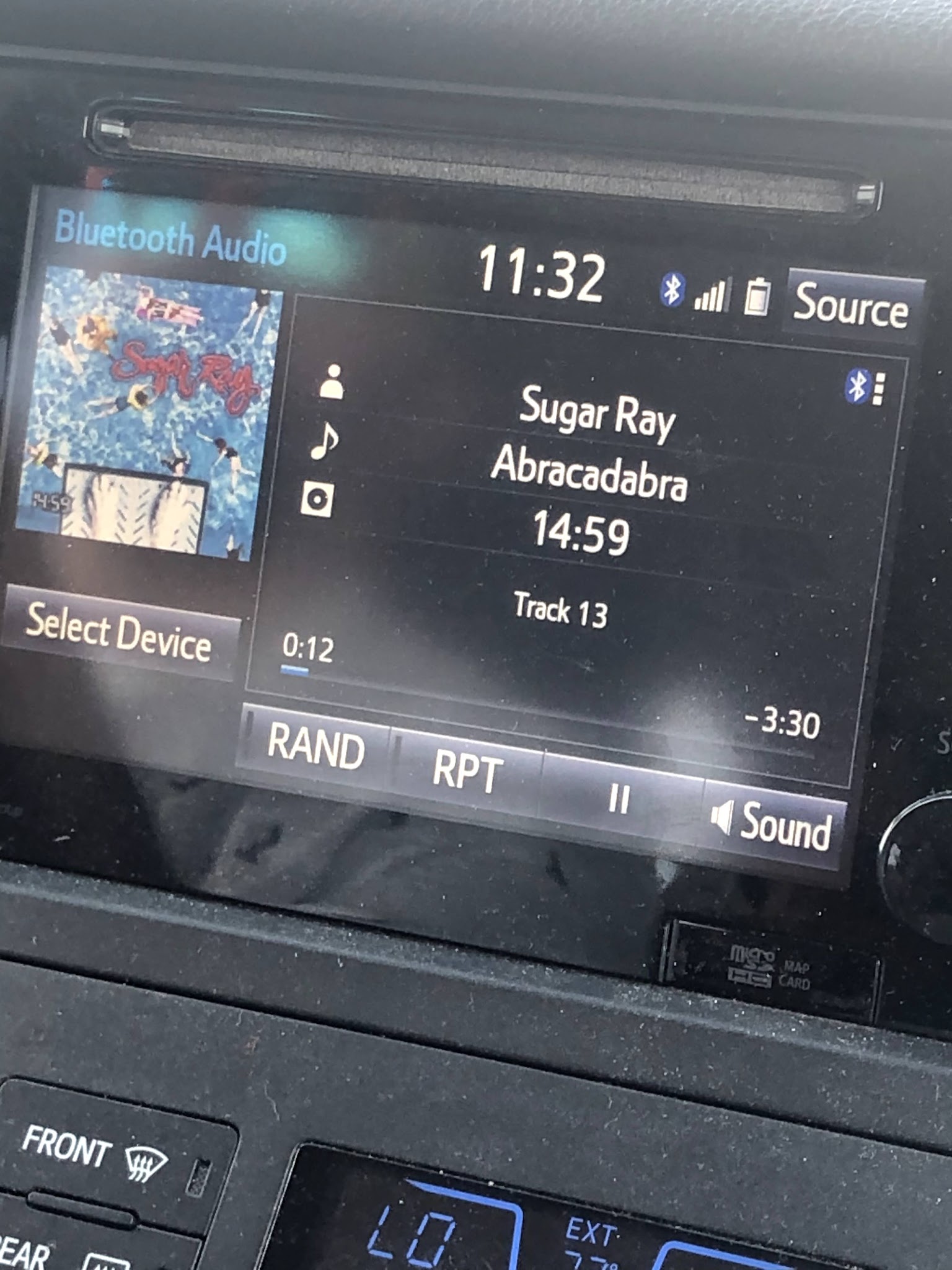 We had agreed to meet at the Basque Block in downtown so when we arrived a little earlier than planned we had no problem passing the time and looking around at the things that were there.

Right on the corner is the Basque center, it looked like a church cultural hall, except instead of a chapel at the front there is a bar.

Mom and  I HAD to get a picture.

(I guess just in case someone reading this doesn’t know: My Great Grandfather, Narcisa Barainca was a Spanish born Basque man. He came to America around 1917 as a young man. He lived in Nevada among the Basque people there. He married a Swiss American, and had my grand father John Barainca. Who had my mother, who is as you know now a quarter Basque. Who had me, who is an 1/8.  It seems closer than all of that, but anyway, we are Basque! Having my mom with us that day made it all that much more meaningful.)

We wandered down the Basque Block and saw what there was to see.

Along the sidewalk between the Basque center and the museum there were songs in Basque to read and enjoy.

It was only on this day that I realized that the geocide in Guernica was an effort for the Spanish people to kill the BASQUE people.

I learned about this years ago, but no one ever said it was because they were Basque!

Old Basque house…in the middle of the block.

The symbol on the box is a sympbl called the lauburu.

The lauburu is a traditional celtic hooked cross with four comma-shaped heads. Today, Lauburu is a symbol of the Basque Country and the unity of the Basque people. It is also associated with Celtic peoples, most notably Galicians and Asturians. Mom showed me on this map of Spain where our Grandfather Narcisa came from, a small town called Lequeitio. Or Lekeitio in Basque.

We checked out the Basque market and saw a few other Basque monuments while we waited for Belle to arrive.

The kids were going to die of hunger, and we tried to find a quick bite on the Basque block, but we went somewhere we knew, Jimmy Johns.

Then we wondered the area that was so cool. 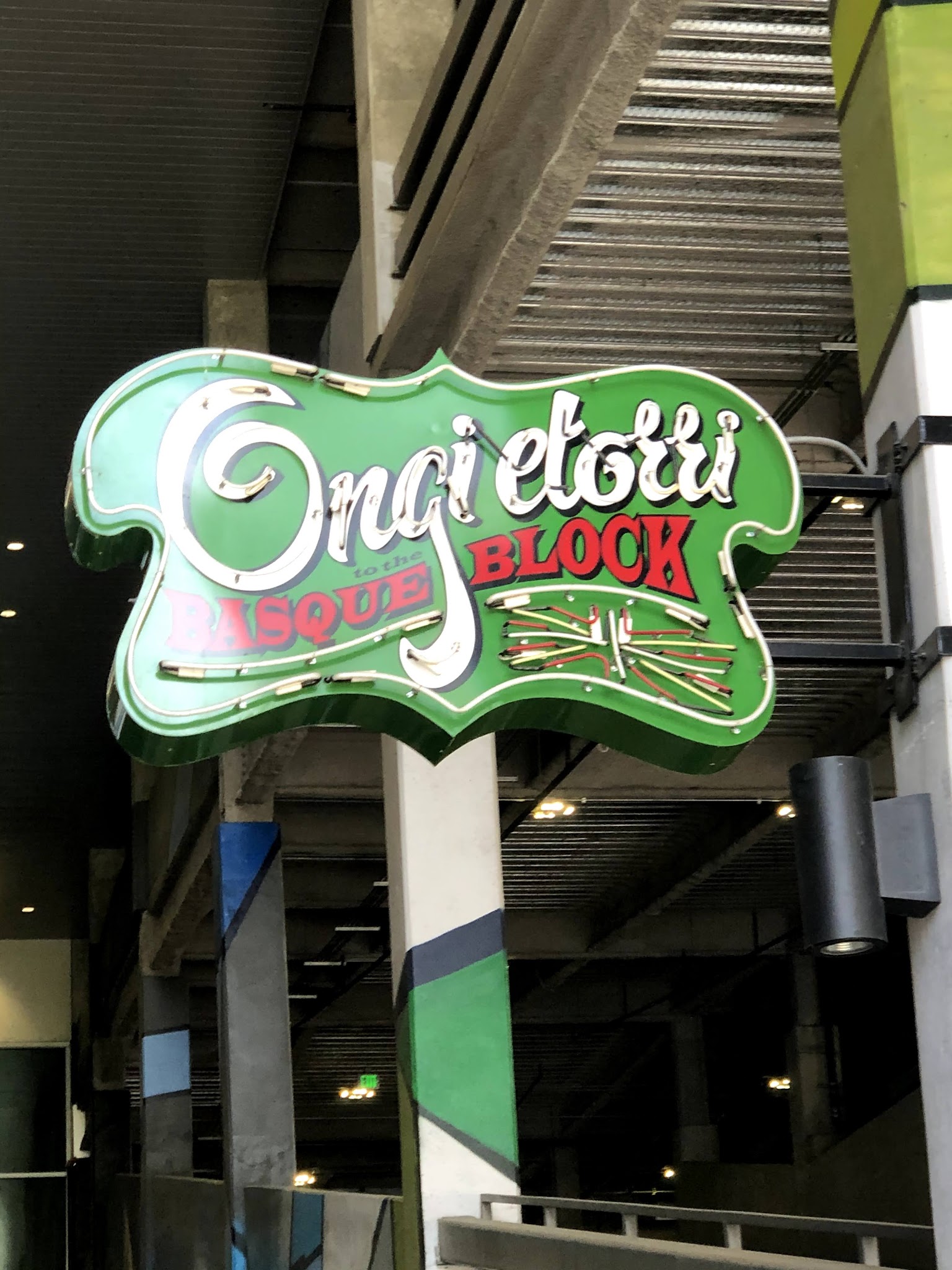 We found this cool area a block away. This sculpture was call the Iceberg.

This was not functional.

Then we found this cool sculpture made of 2 miles of barbed wire.

I love these babes.

As we headed back, there was a motorcycle ralley headed toward the capitol. 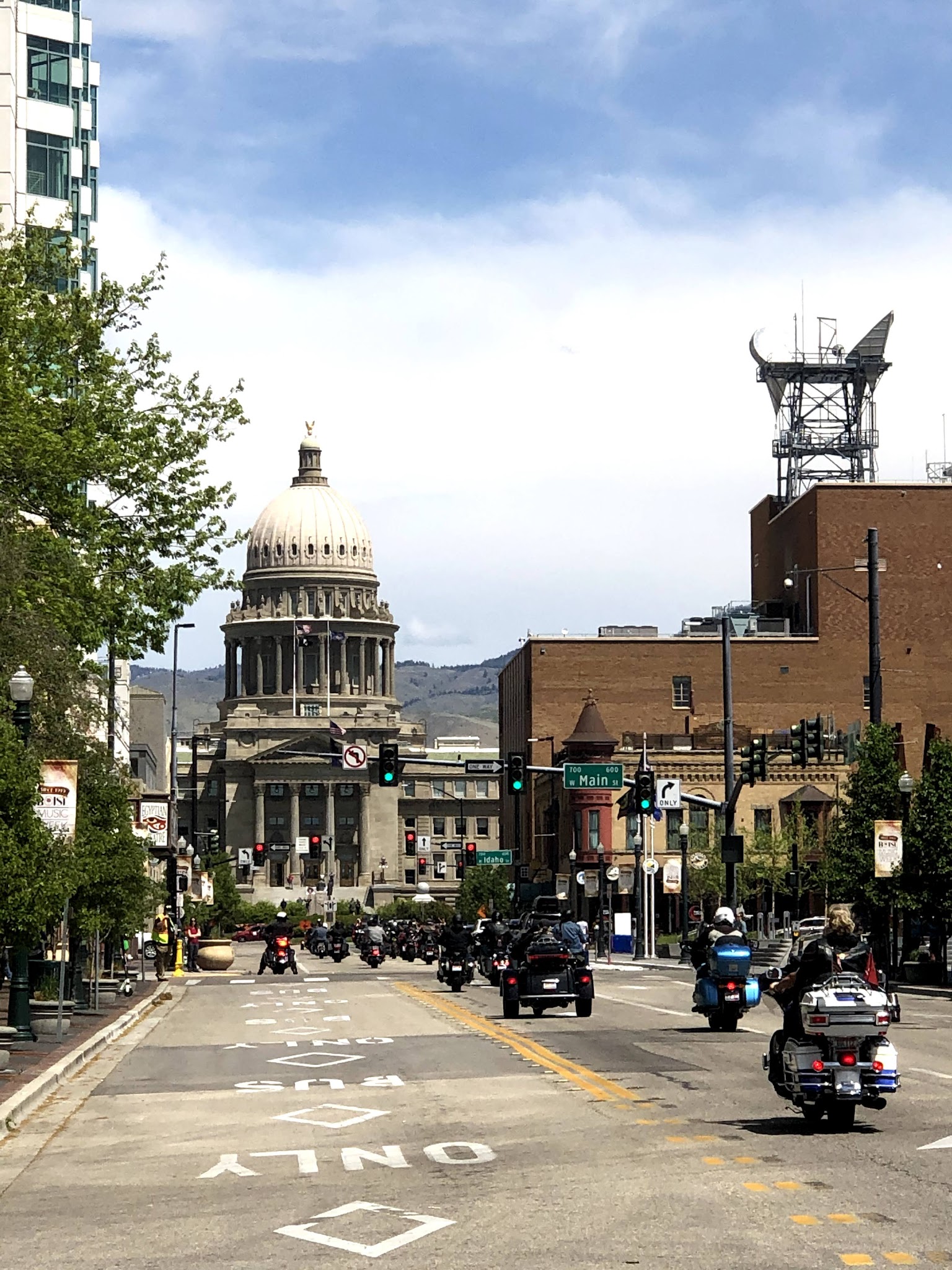 And there she was, my baby sister across the road, and we ran and met in an embrace. No pictures of that, we were too busy embracing. Dave, (Adam’s Dad) Eric, (Adam’s Brother) and Adam were there too.

We went into the museum and learned all about what Grandpa Barainca used to say, “Euskaldunak” or what Basque people called themselves.

There was a replica of a sheep headers wagon that some lived in when they came here. They were sheep headers in the US. It started because the first Basque people that came here did it because it was a job you could get without speaking English.

While they herded sheep, they left these making on trees while they worked.

There was a whole photo exhibit in 3D images of Basque people at the turn of the 20th century in Spain before they came here, which was really interesting and engaging. 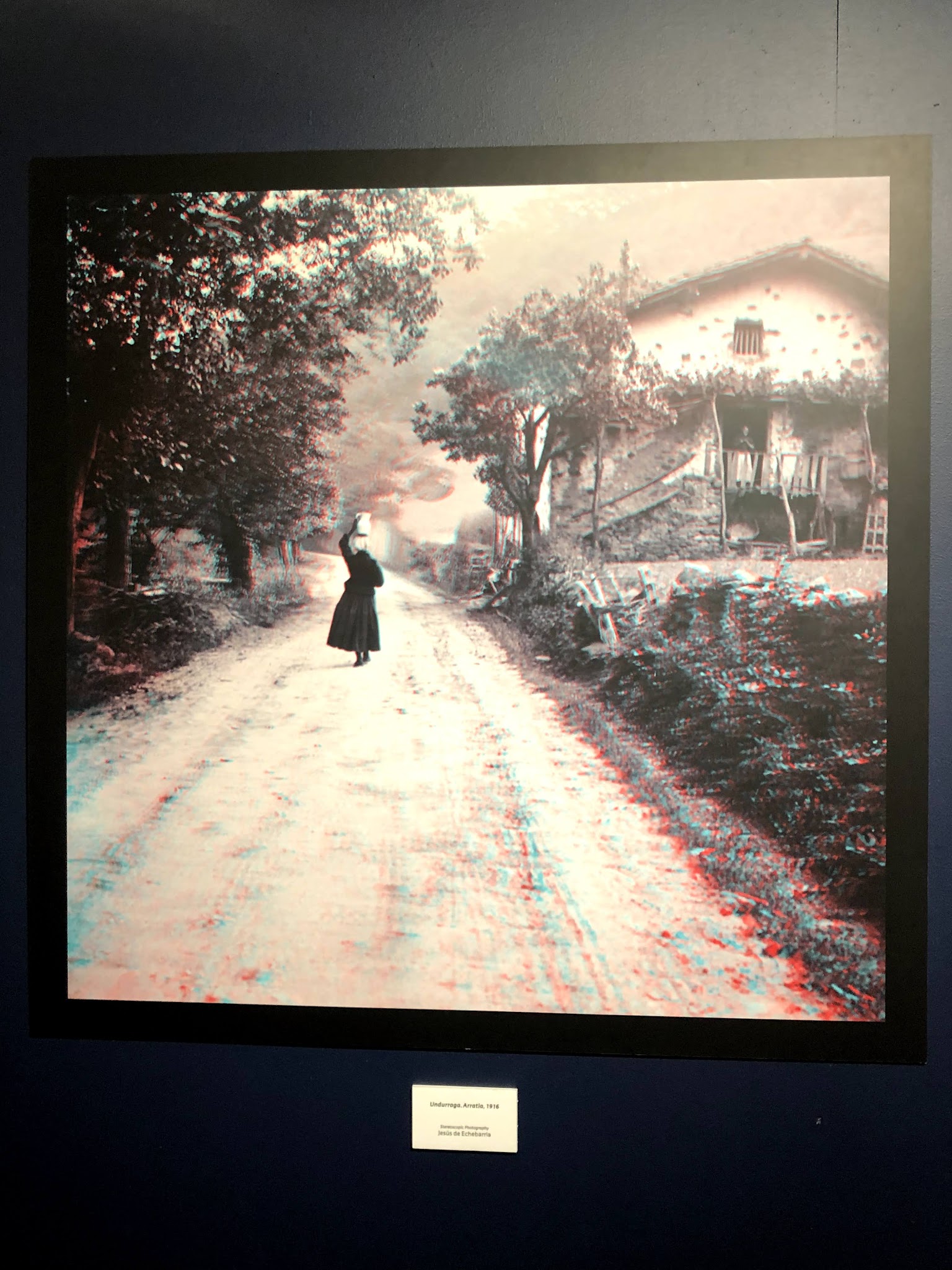 There was another section of the museum. It was all about the Basque people who came are Spanish missionaries. There are still strong Basque communities all over California and Mexico. 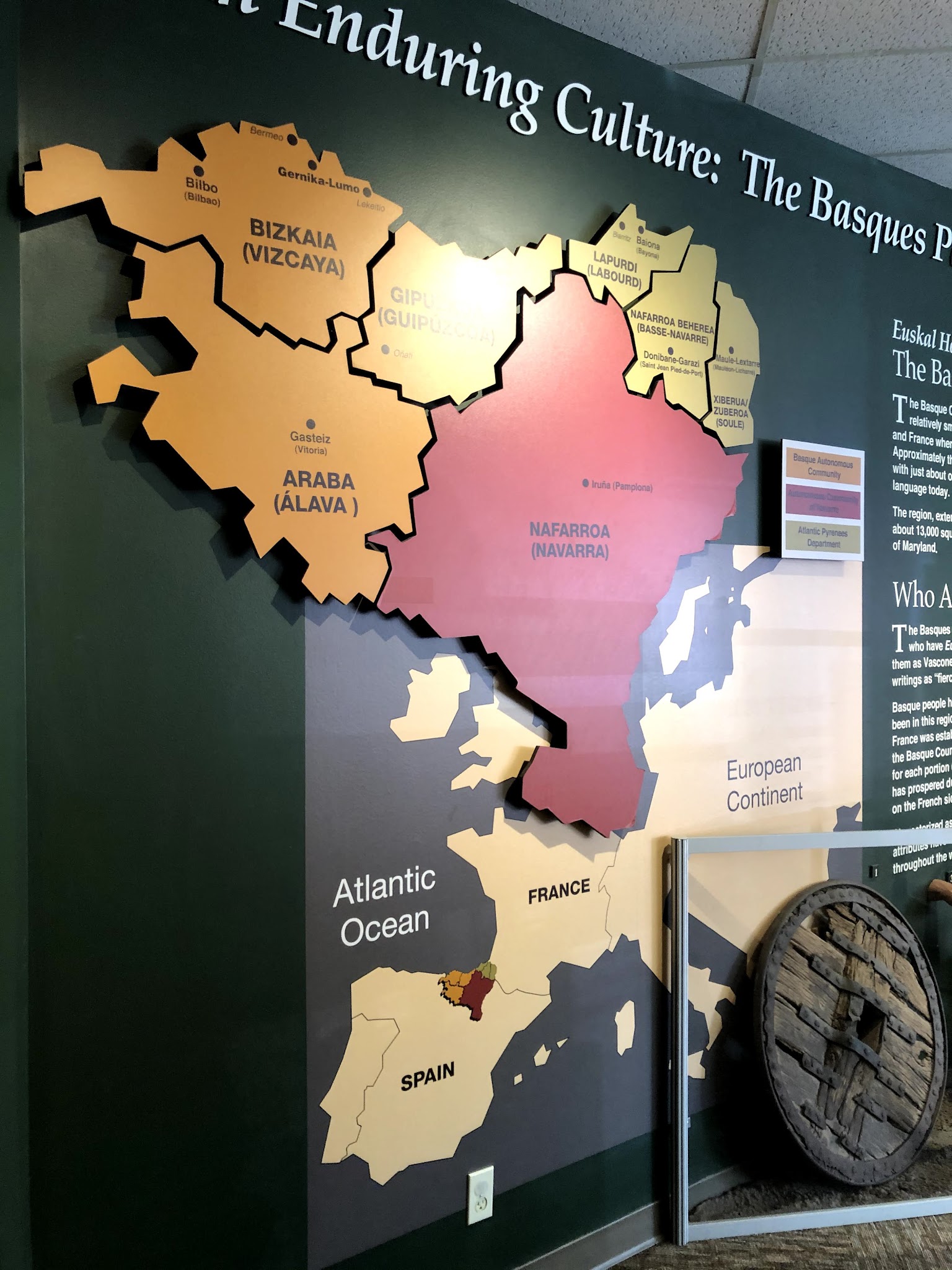 Mirah got a new shirt at the gift shop.

Simon hadn’t come to the museum since he was supposed to be napping, and since Janet doesn’t mask she stayed with him. They took a drive and ended up at a park nearby.

And so it was then that I got to be reunited with my buddy love Simon.

I tired to be SO cool, and he was kind of okay with me for a minute, until he wasn’t. 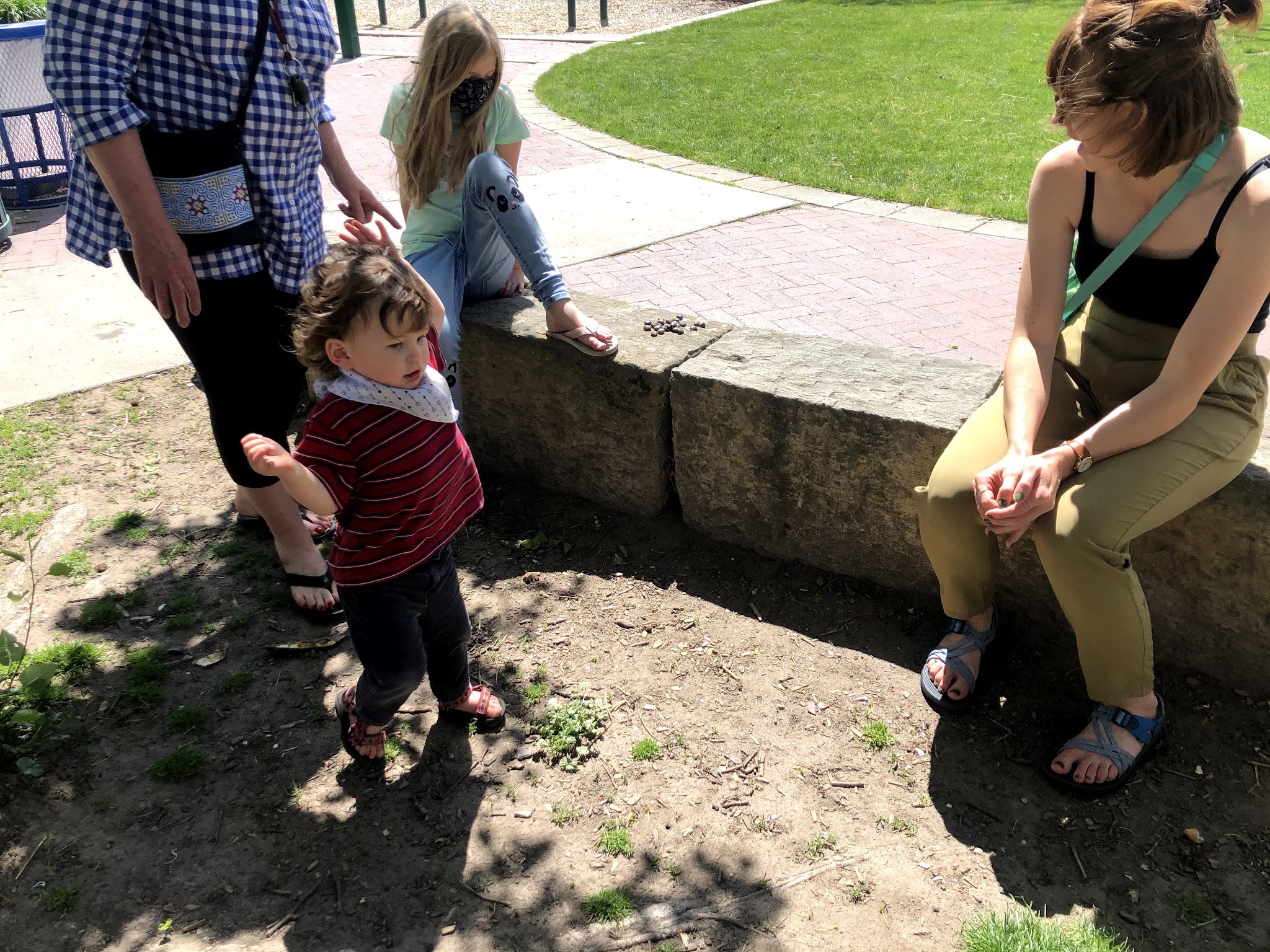 Mirah really wanted to play with him, but he wasn’t ready yet. 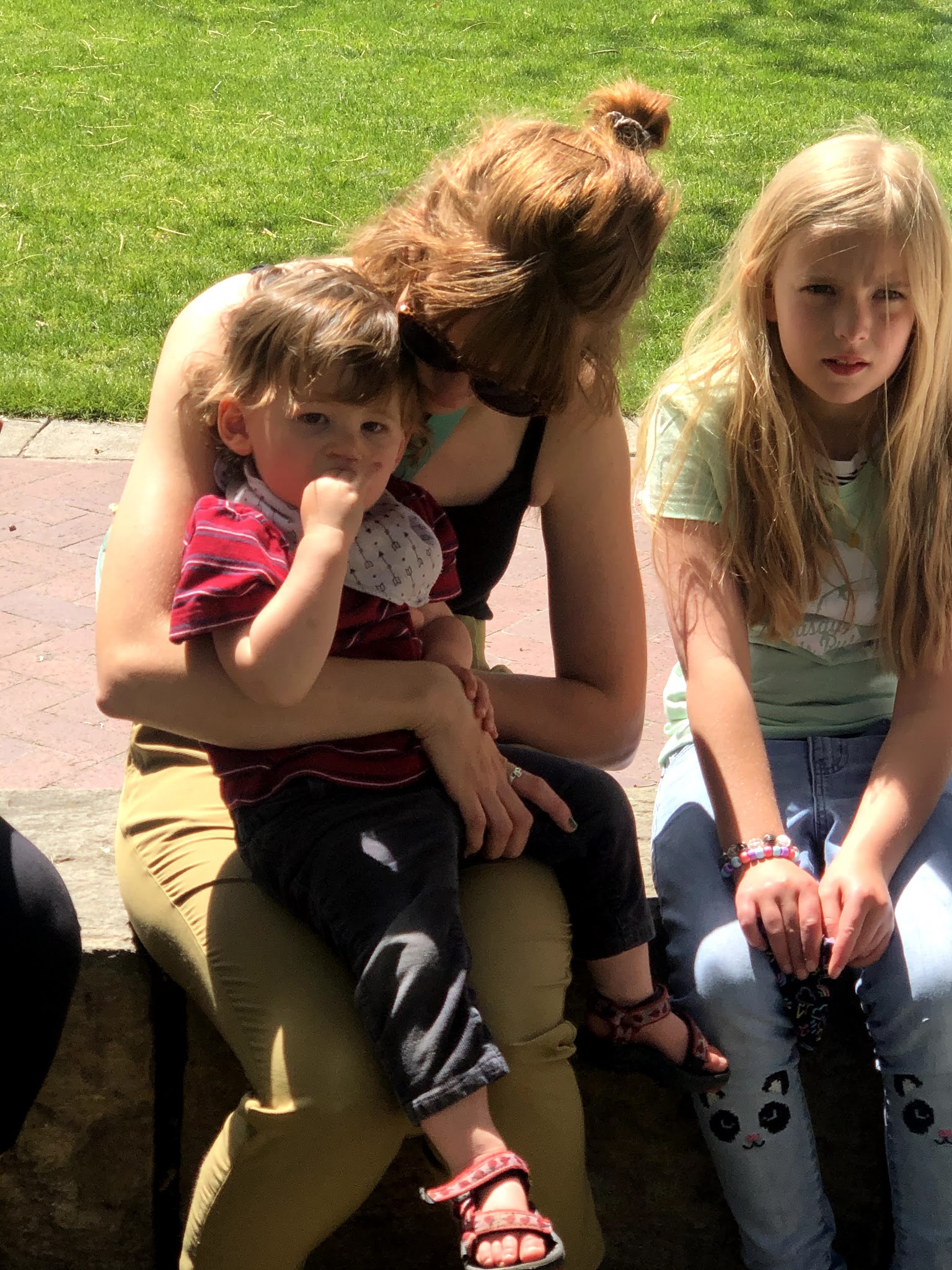 He did eventually warm right up to Mirah.

He was already all warmed up to Grandpa Dave. 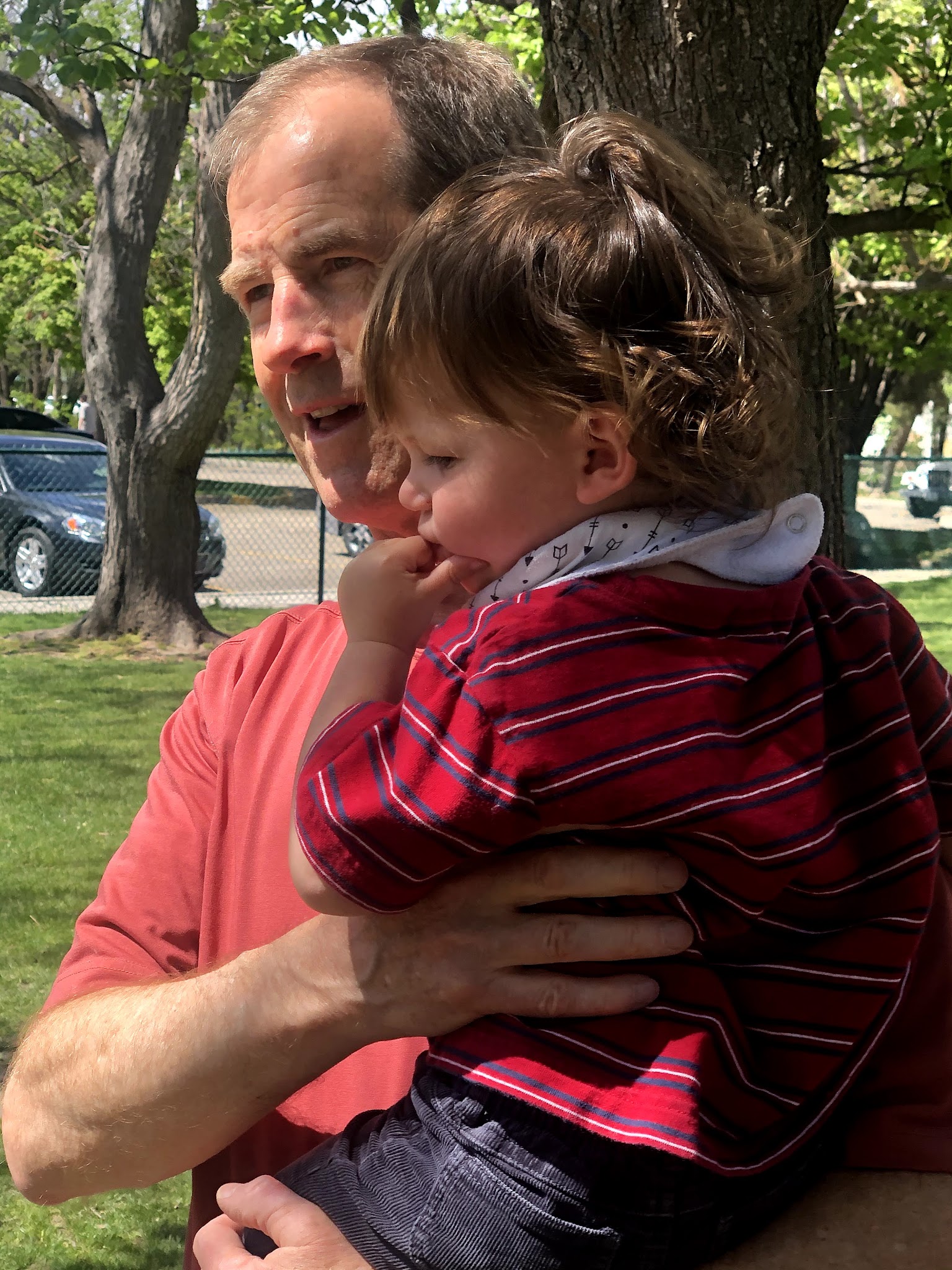 Now with Simon, facing the sun.

We wanted to take a walk across the bridge and to the Library! (haha that was added to the name when they celebrated their centennial) but as we walked over…the weather suddenly began to turn.

We ended up kind of running back to the car. 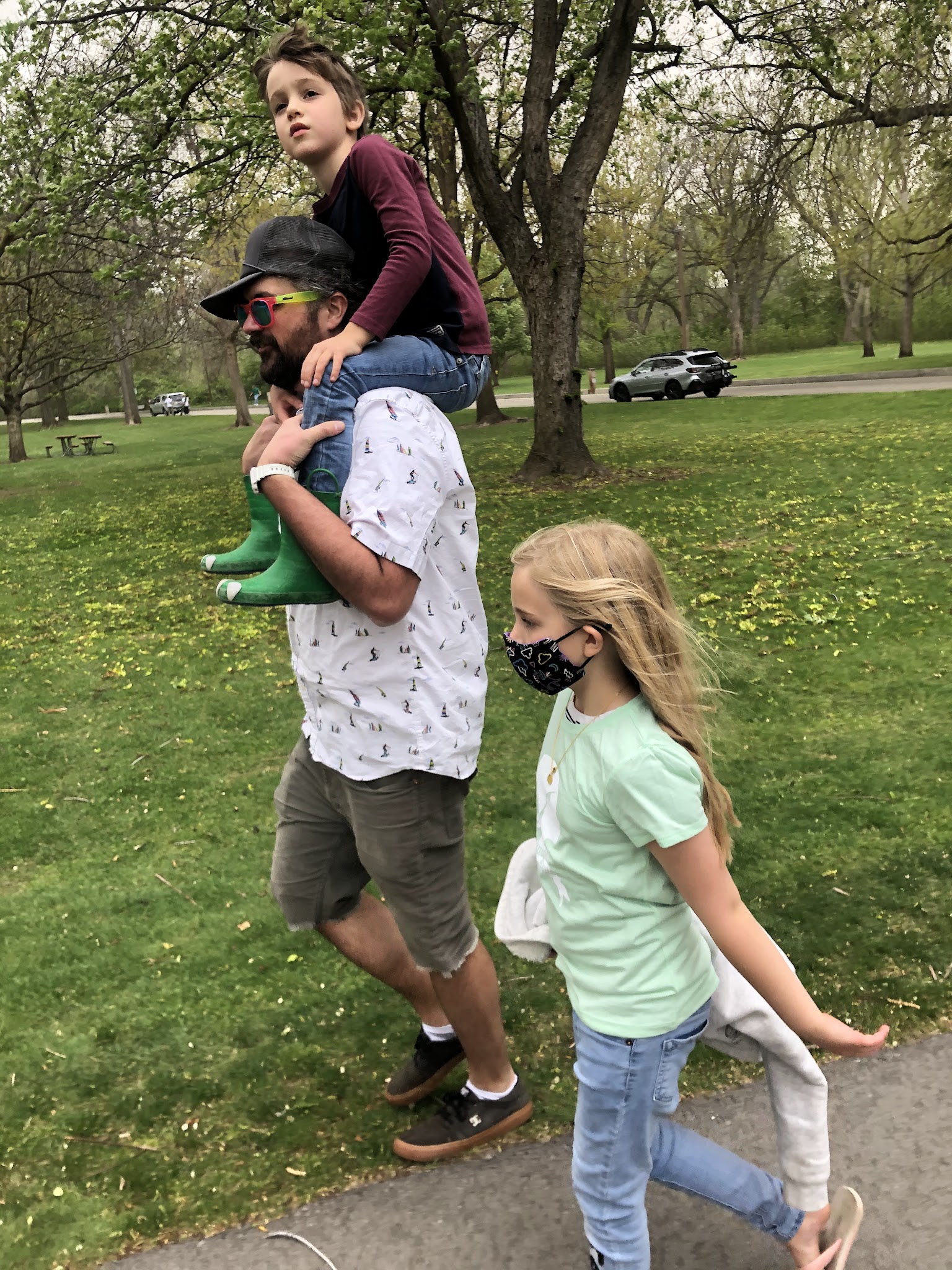 We went and checked into our hotel. Woo, that was crazy.