After my GRE class ended on Wednesday evening, we set off into the night, to a hotel, here, in Boulder City NV. A tiny town just past Vegas, right near the Hoover Damn. Oh, and Lake Mead!!! (You can see it behind us.) Here we are standing on the hotel stairs. Also at this place, were Betsy, Malia, Judah, Asher, Rosy, and Ginger. 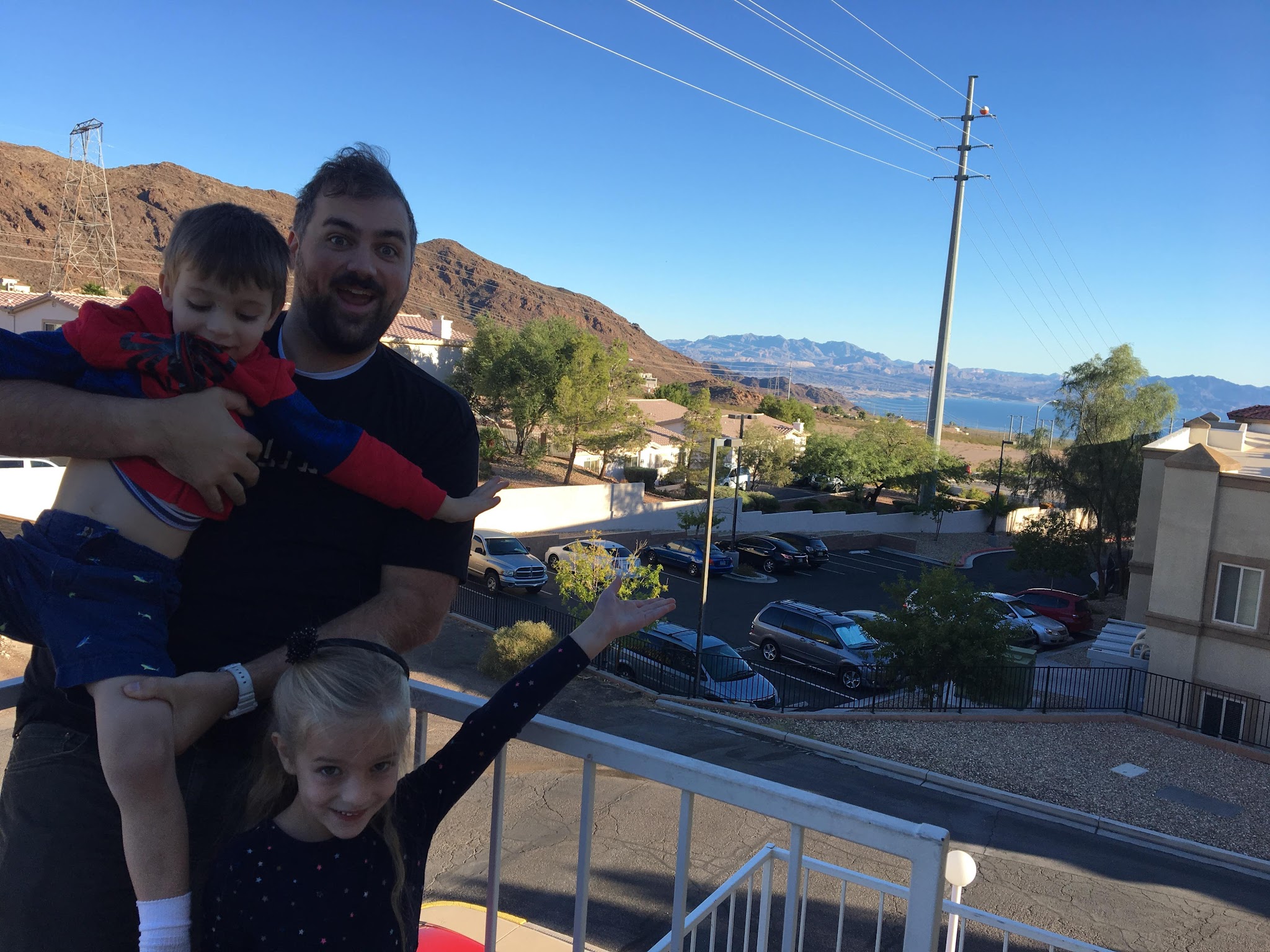 We met up at breakfast. It was really fun to meet up that way. Everyone else in the continental breakfast area looked like they wanted to die when we all walked in. We were SO loud.

After a leisurely breakfast and morning, we packed up the cars, and headed down the road to the Hoover Damn.

First we stopped to the Scenic Overlook, Bridge area. The theme of this walk? Holding hands. There was a lot of really cute holding hands.

Like during this walk to and from the car, Lucas only wanted to be with his Aunt Betsy. And Mirah and Ginger really stuck together.

I remember reading something about this years ago. 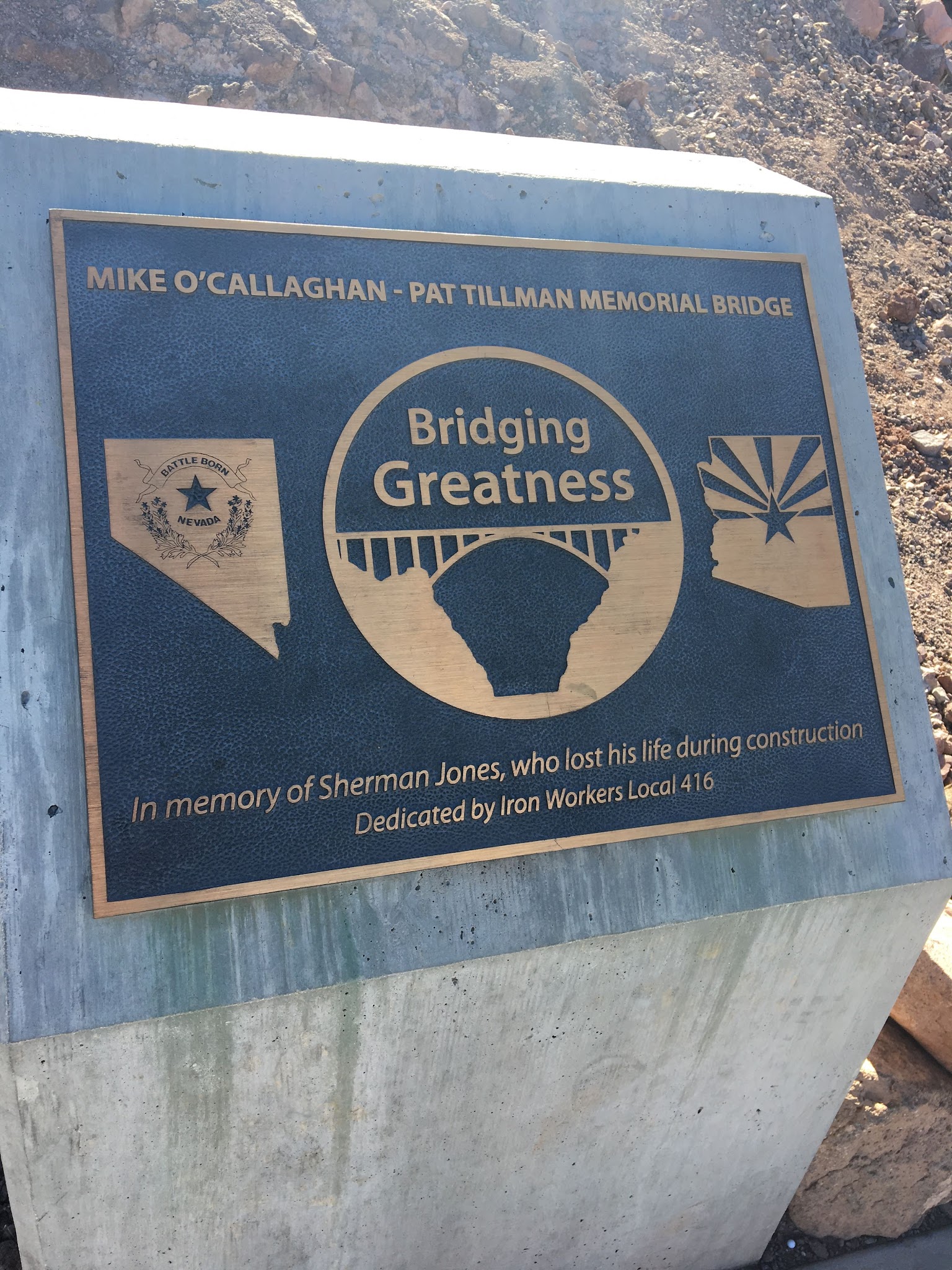 The hand holding expanded. I mean it looked like so much fun. I couldn’t pay anyone to hold my hand! 🙁 😉

Judah lost interest in holding hands pretty quick, he was off to discover! The girls, who are equally as adventurous in general, were as a little group, nervous as we walked further out over the canyon.

We were a slow tight group.

Our first glimpse over. Holding on VERY VERY VERY tightly to our kiddos. 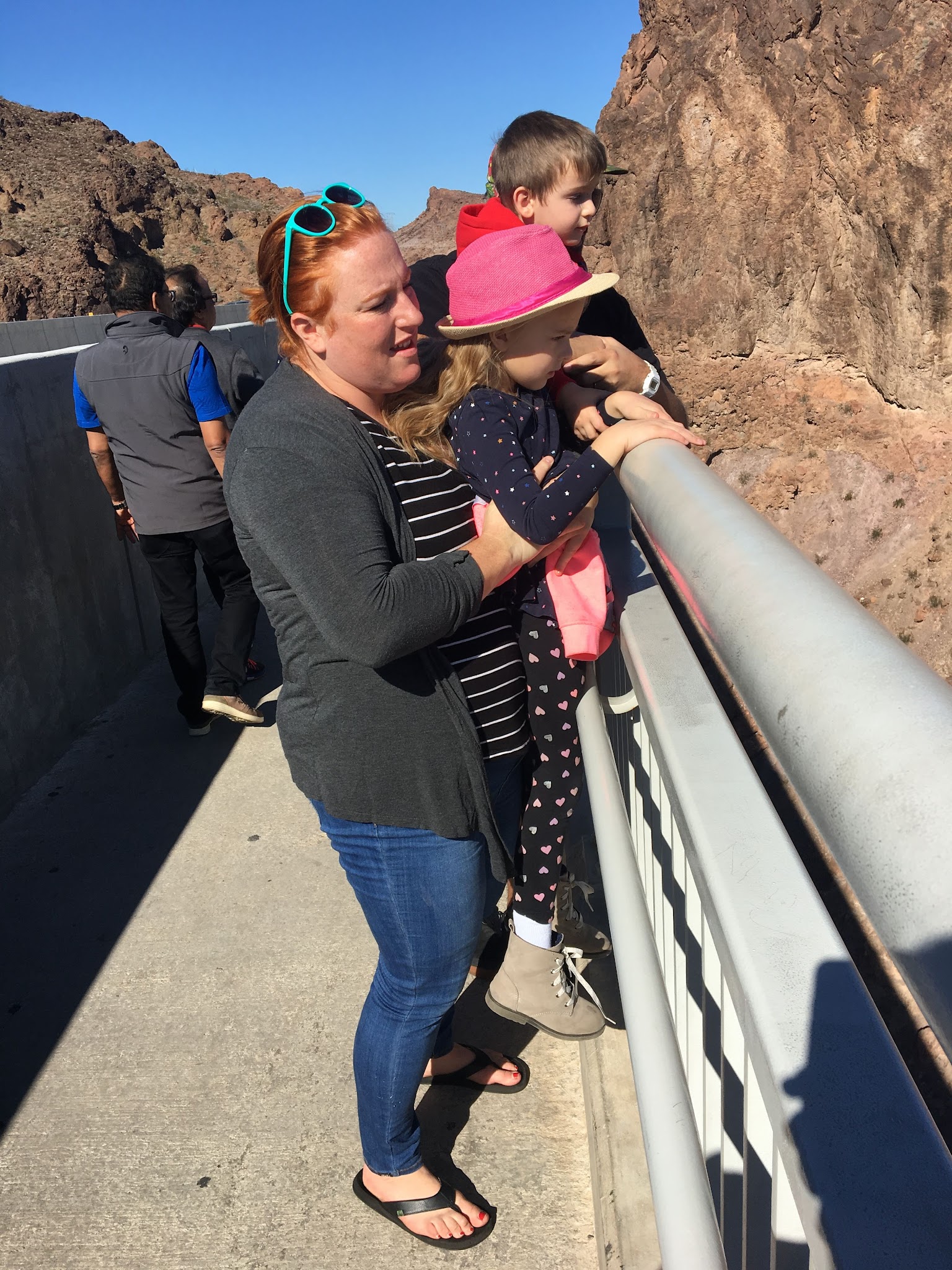 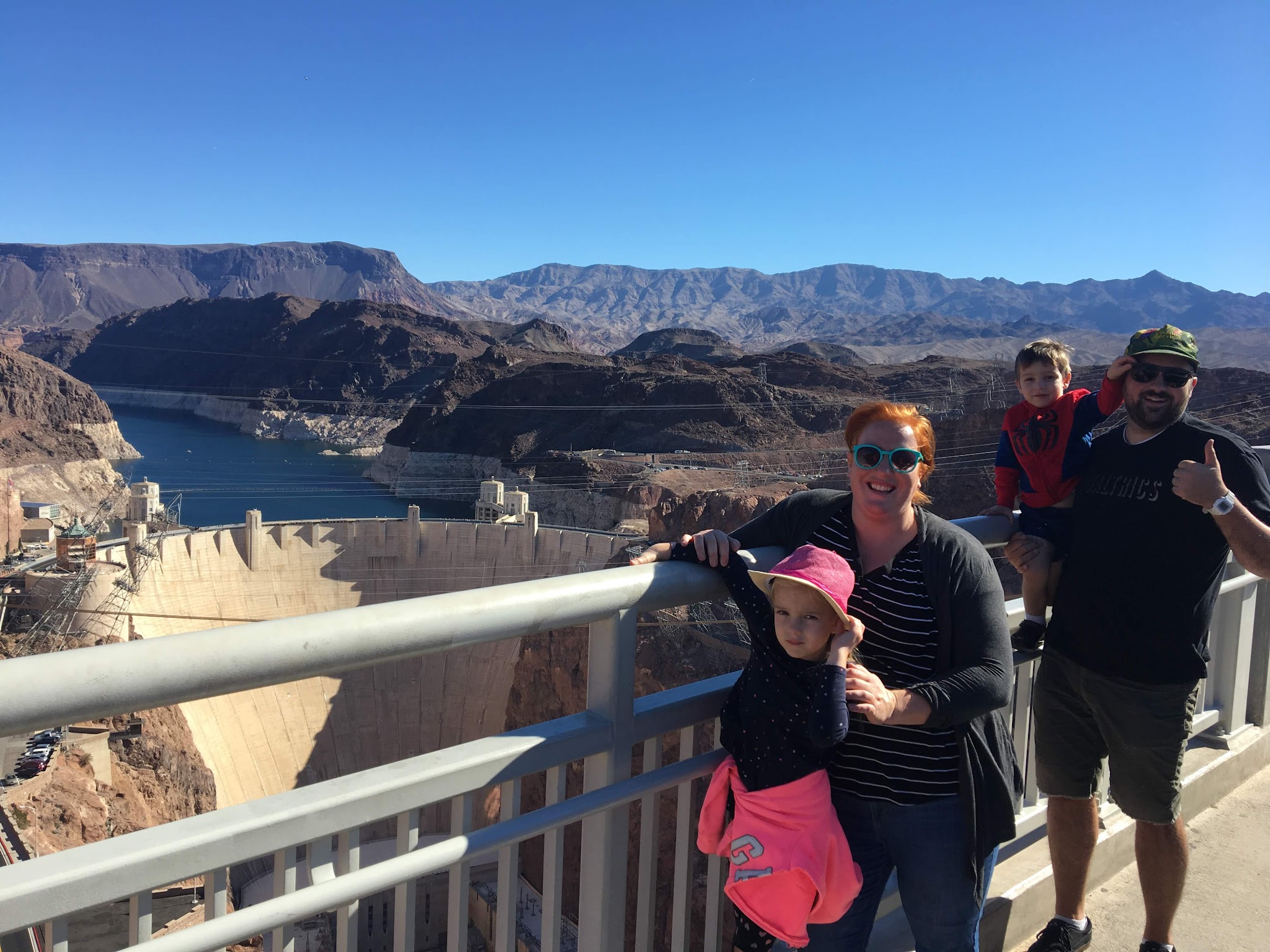 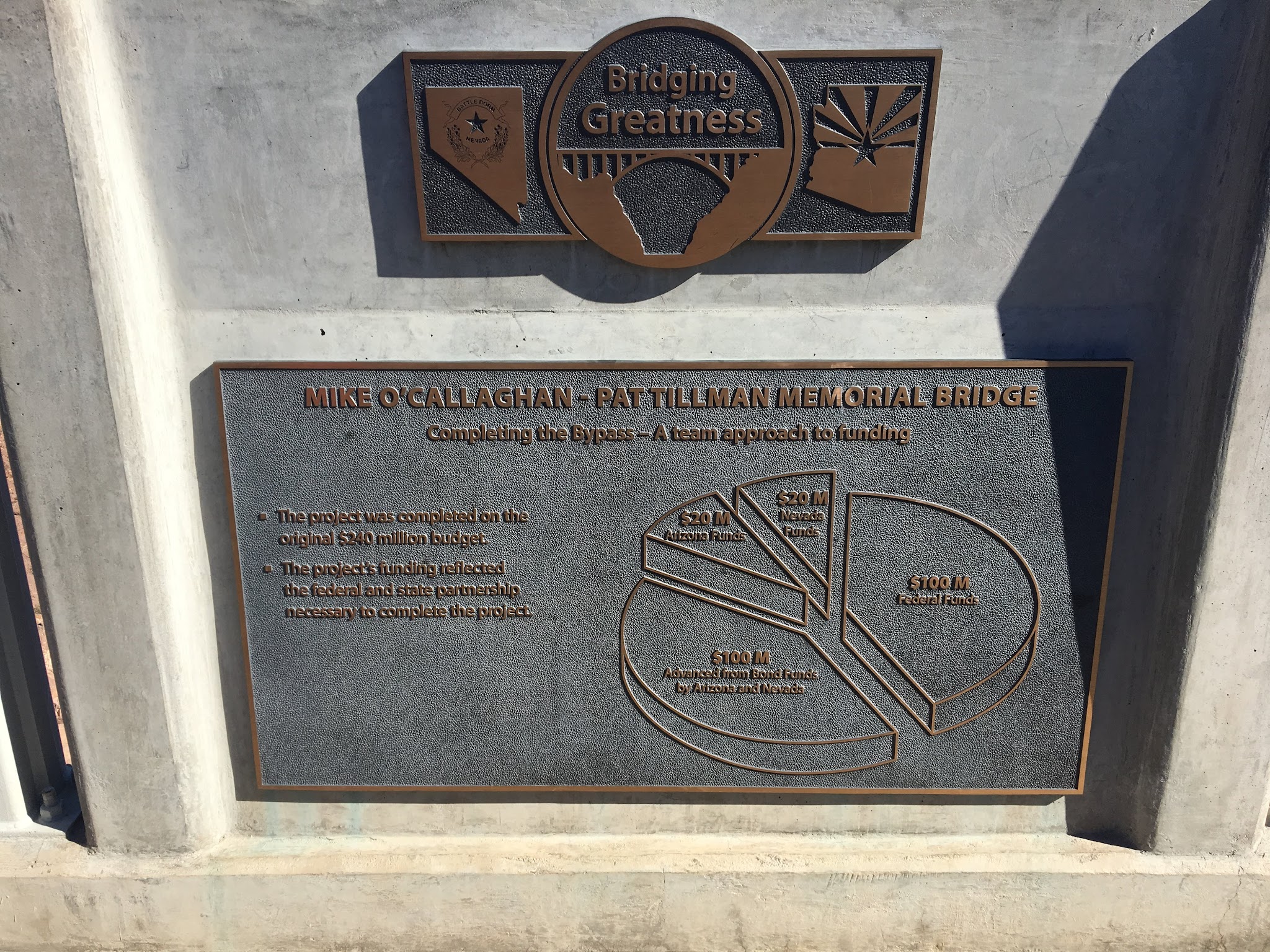 As we tried to get pictures with the Damn, we found it hard, since the walkway was pretty narrow…

Only Tall Karl was very successful.

The sun was getting higher and the day was getting warmer, and the kids were ready to head back to the car.

Then we drove down in our separate cars, down to the Damn. We were considering going to tour the Damn, and there were LOTS of Damn Tour jokes through the morning, but in the end, there were SO many people, and the kids were already getting hungry. It would need to be a full day thing, where were got up first thing, got in line, and took the tour, with little to no idea of doing much else. We will do it someday, just not today.

It was still a pretty cool drive.

It was pretty shocking how low the water levels are.

Then back to the road…on our way to our next stop.