First of all:
Happy 34th anniversary Mom and Dad!!! I love you guys and I am so glad you got married!
On topic.
Mirah loves Luther. Cameron and Kelly’s dog. 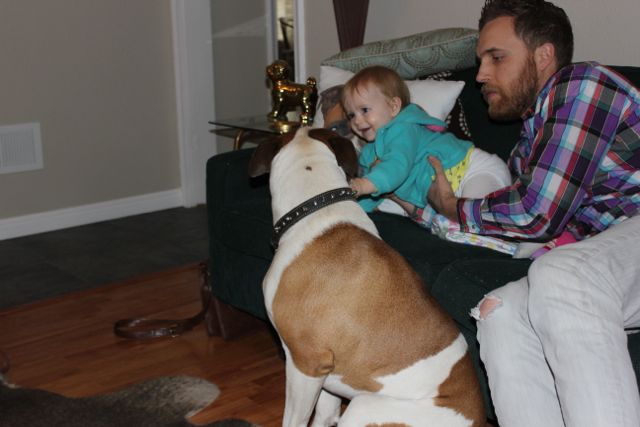 She also really loves Cameron for that matter. 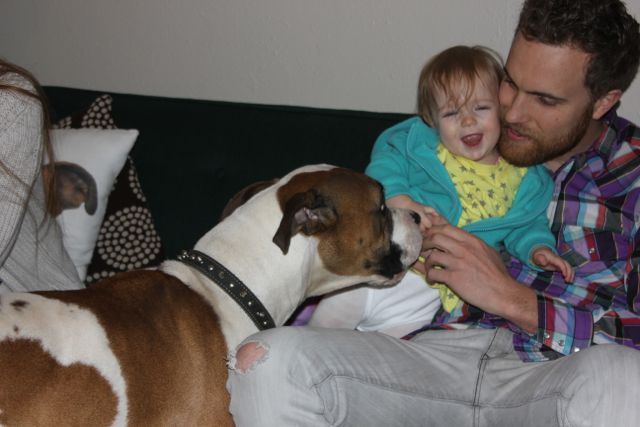 Oh yeah, and then there is her aunt Chelsea who she loves. 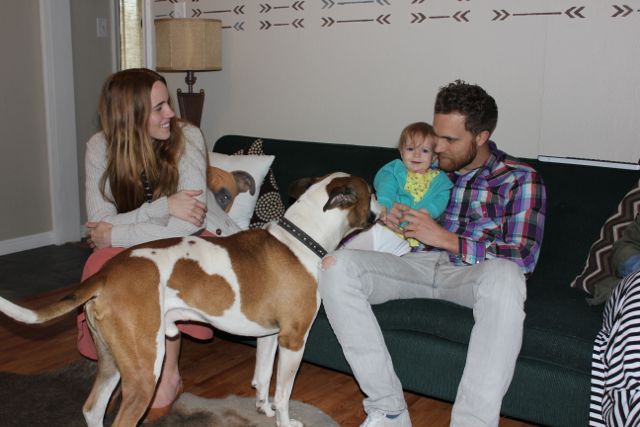 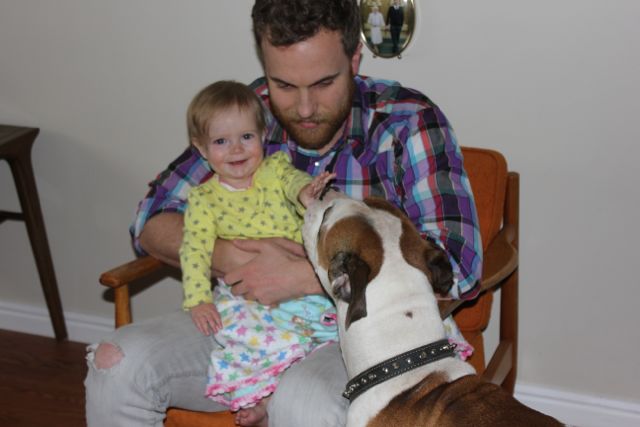 I mean she really loves that dog.
He is really sweet with her too. She chases him, grabbs his tail, even his face and jowls and he didn’t bite, nip, or even bark. He is a really sweet dog. And Mirah loves him. She is solidly saying Dog, dog “da” and sometimes even “da-gi” especially after today. 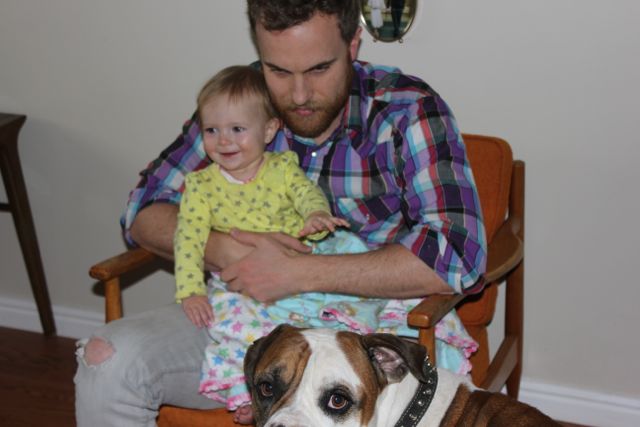 So what’s going on?
As my little sister Chelsea’s MTC entrance date draws closer we are doing lots of things that we planed on doing before she leaves. Shopping for mission clothes, reading Avatar comics, and visiting temples. We have been trying to get to the SLC temple which turns out to be much harder than it should be. Between the long drive there and what seemed like an extra long and warm session it has been hard to do with a little baby who is still technically breast feeding and taking a million naps during the day.
A week or two ago we arranged with my awesome big brother (soon to be father) Cameron to take care of little Mirah for us while we went, since his wife Kelly would be working that day anyway. Last minute it turned out that Kelly had the day off, but since it was already arranged, Cam was fine still taking care of her. The best part was that she ended up coming with us too which was so much fun.
If you are endowed, and in the greater SLC area you need to go to the SLC temple. It is such a cool experience and the building is so beautiful. It was also really cool to sit with Chelsea and Kelly and geek out about the temple together.
Afterwards we headed back to Cam and Kelly’s place where we found little Mirah crying. Apparently she had cried 2/3 hours that we had been gone. Poor thing. Also, lets get real, poor Cameron. As sad as I am for her, I can majorly sympathize with any adult trying to sooth an unsoothable baby. He finally just held her and put his headphone in. Not my first choice  😉 but she was safe. I think that she was tired, hungry, and having a little anxiety about my absence. Once I nursed her and held her a little she went right back to uncle Cam, no questions asked. In fact the above pic of them is right after she had eaten.
Cam had heard about this Vietnamese place that was supposed to be really good so we headed over to get some late lunch. Not of course before I made everyone go outside and take some pictures. 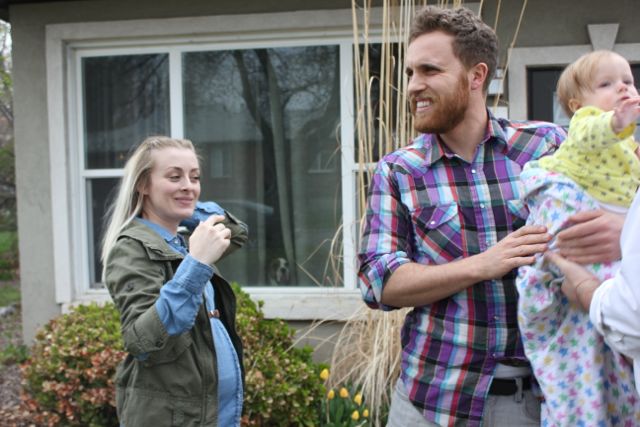 Cameron and the lovely Kelly. 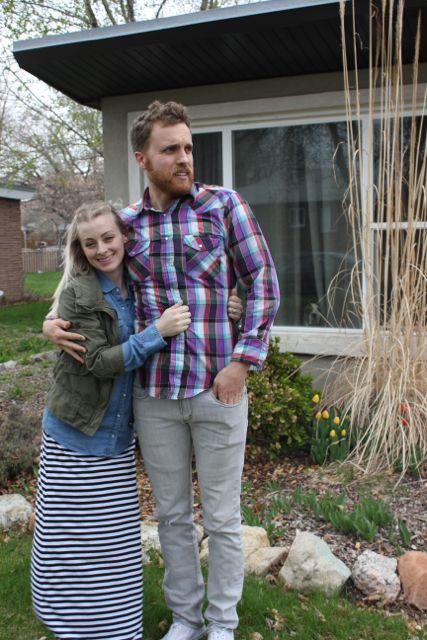 If you look in the window behind them… 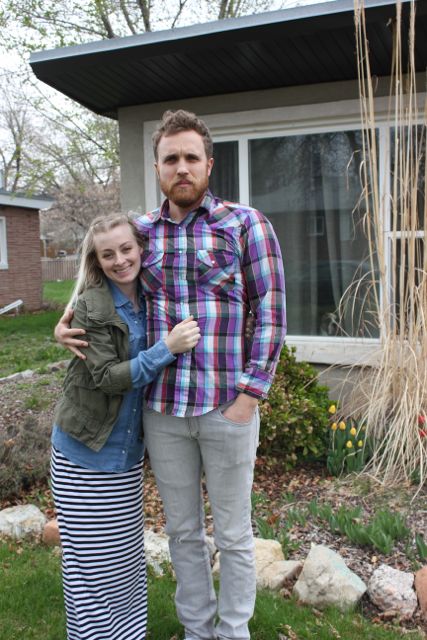 Luther wanted to come out too.
They are so sweet together. 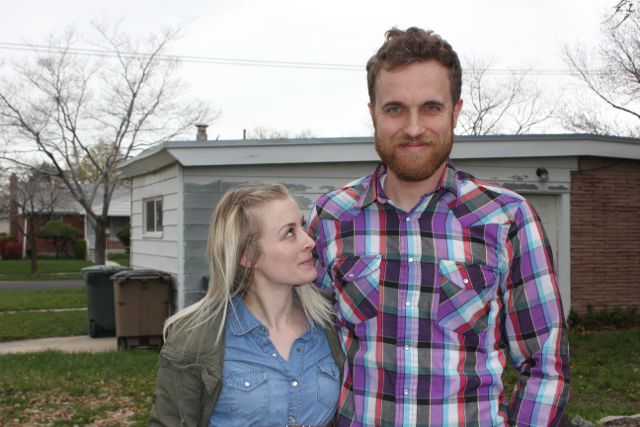 I made Kelly take this one. 🙂 Thanks for being a good sport Kel. She is getting such a cute belly! 17 week along! It is so exciting to see the Pipkin cousins growing as a group! 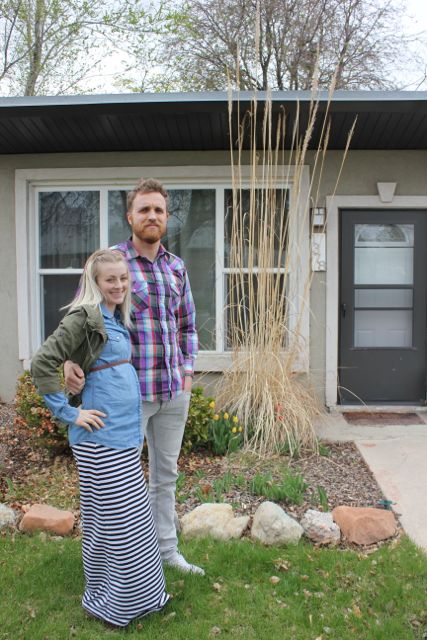 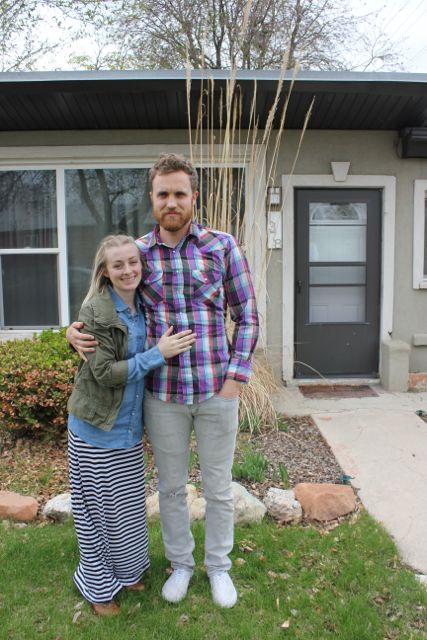 Then one fo the girls. 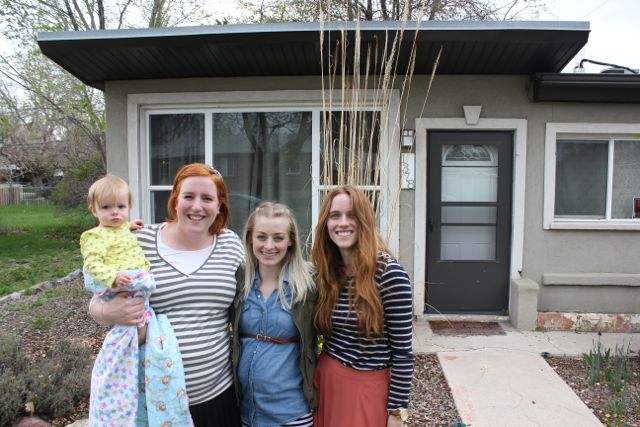 Mirah missed her afternoon nap. and she had been crying for two hours…she has a bit of the crazy eyes. 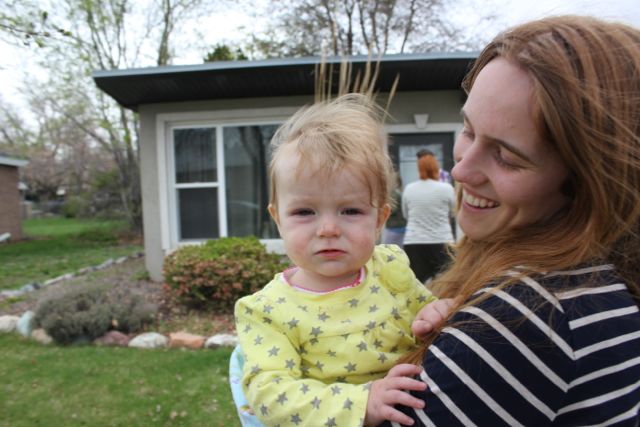 The place we were looking for was “called” Oh My. We had heared about it from Kelly’s brother Brooks. None of us had seen it spelt. We also knew what street it was on. So we stopped at this place called Ho Mei. 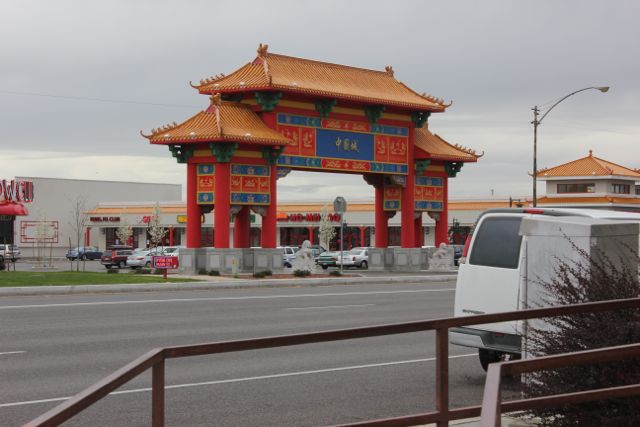 We went in and this is what we found.
BBQ duck. 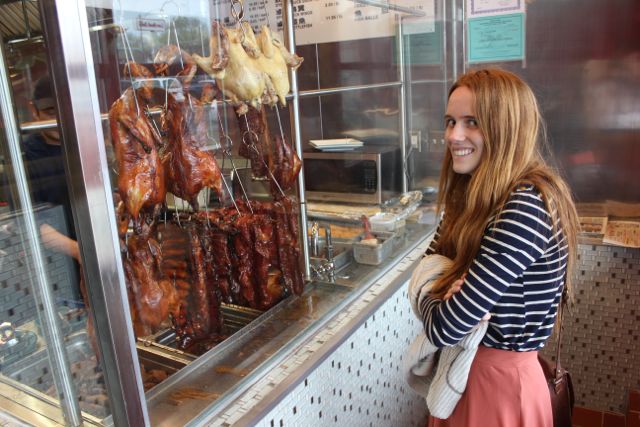 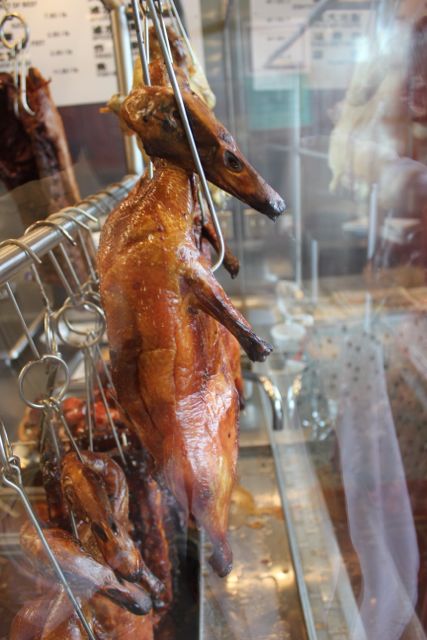 It wasn’t Vietnamese.
Cam made a call and we ended up crossing the street.
To a place literally visible from Ho Mei. 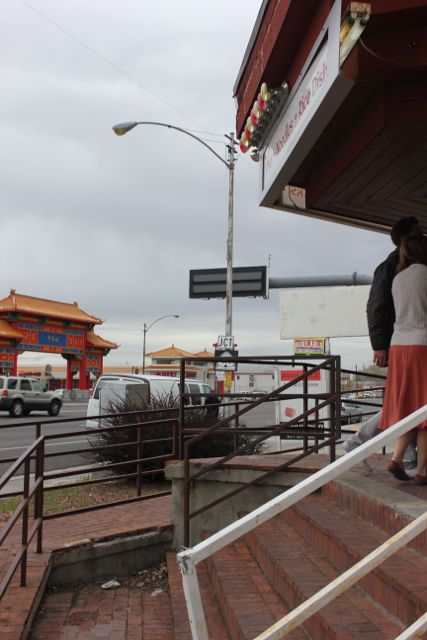 To a place called: 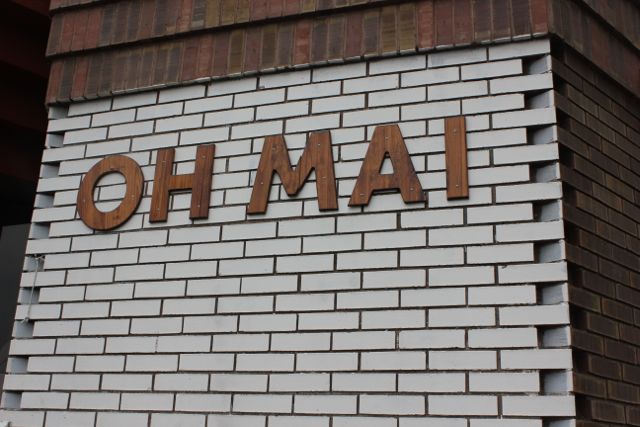 This had to be on purpose, right.
They were intentionally being confusing we think.
It was worth the confusion however because it was awesome!
Seriously delicious. It was primarily a Banh Mi place. If you don’t know what Banh mi is: 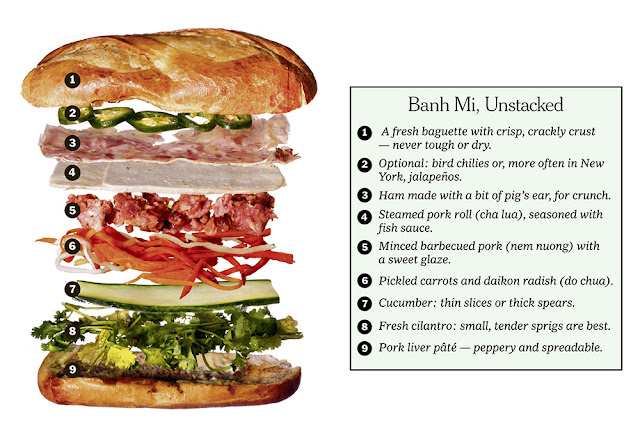 The guy behind the counter suggested to get a small soup and a sandwich, so we did. I actually got the rib eye stake sandwich which is similare the sandwich above only with steak as the protein and with different cheese. I also added an egg, as per Brooks’ suggestions which was really delicious. I also ended up taking off the Jalapeños for reasons of…my mouth was on fire. I also had a brisket Pho, I love Pho.
Despite her tiredness, little girl did very well. The restaurant was busy, which kept her busy people watching. 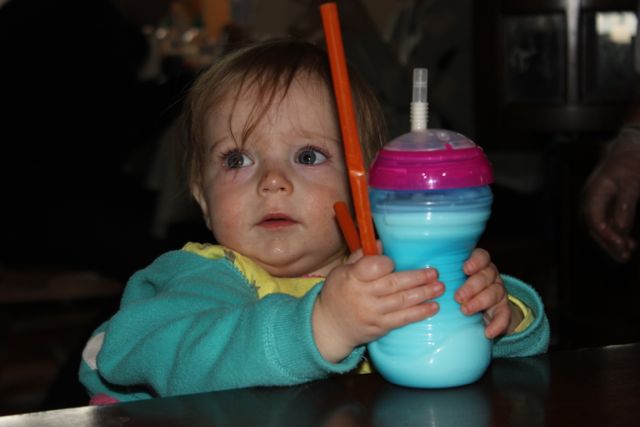 Oh, we also had some delicious Ming Rolls with peanut sause. Yum. 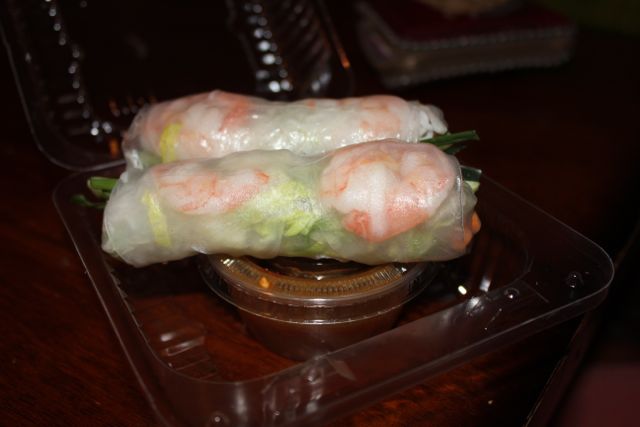 Kelly skipped the sandwich because bread isn’t sitting well with her at this stage of her pregnancy and had a curry instead. We were all please as peach with our meals. 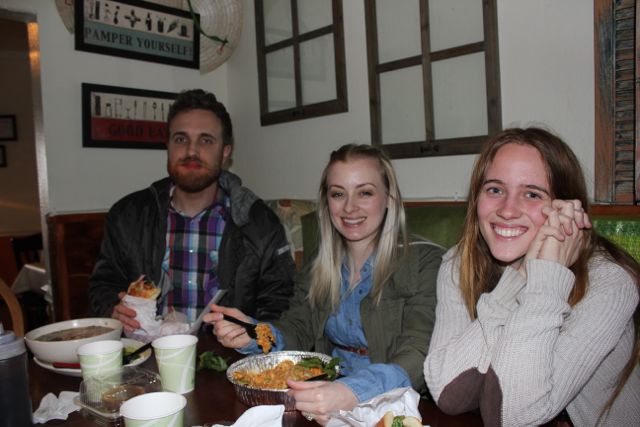 We sat and talked about baby names, the session, mom and dad’s 34th, and of course the food. It was wonderful day. Great to be together, go the the temple and to try an scrumptious new food.