I started this post MONTHS ago, figuring it would only take a month or two to get settled into our new place with a little new furniture. Here we are 6 months later, and things have finally slowed, and I am just going for it. We are so happy with our new home. SO happy. We love it here and feel SO incredibly thankful to have been able to move within our ward, stay at our school, and upgrade our lives. The house is beautiful, and fun, and has a place for all of us to enjoy. Here are some of the changes we have made, and the journey we took getting here. 🙂

It only took a week after we moved in to get this gargantuan TV. It like most things of the sort arrived within days of the order. It is by FAR the largest TV we’ve ever owned. It’s as tall as Lucas, in the box. 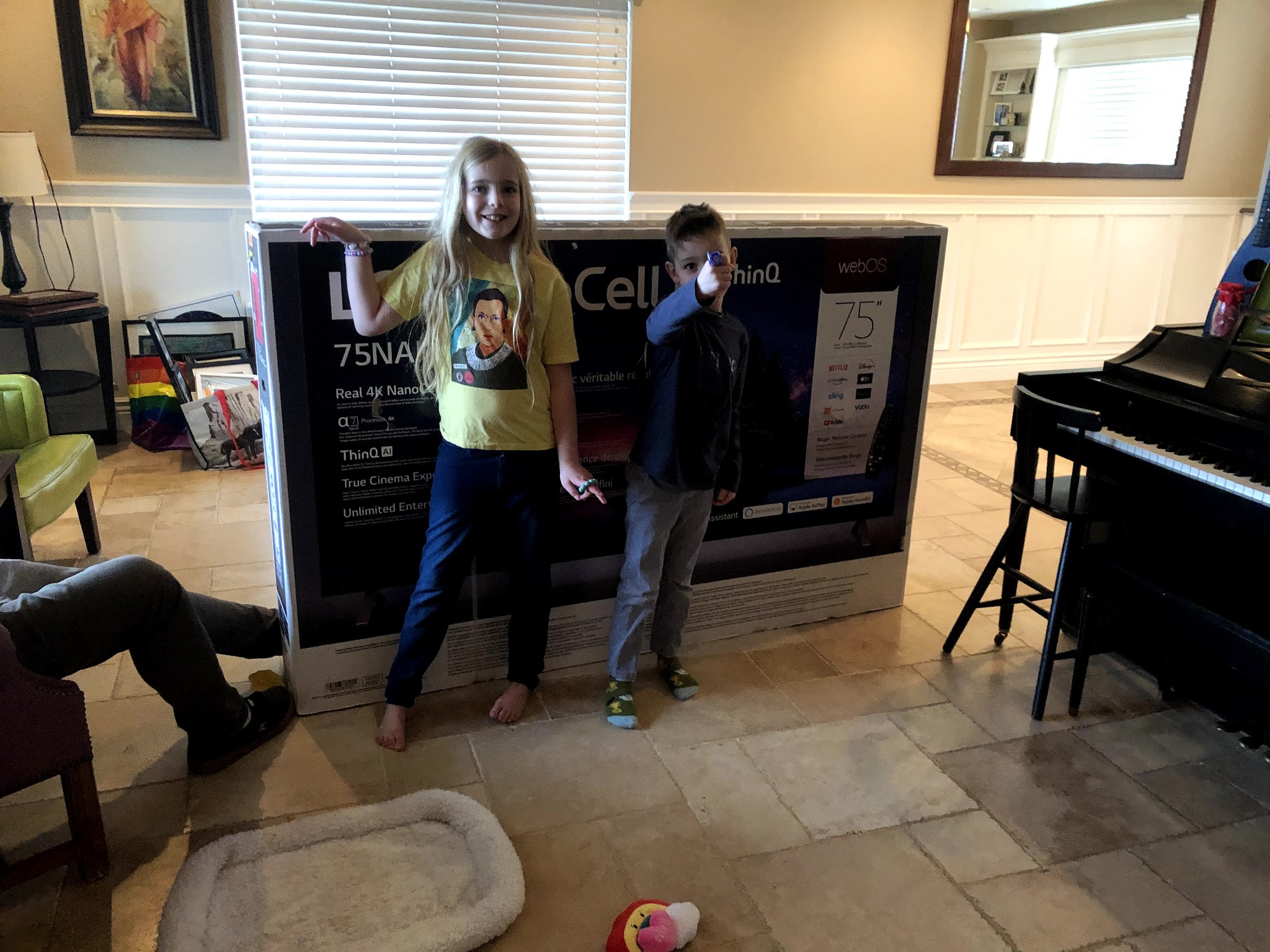 Installation of this TV took as special mount and we had to run a line through the wall. Which took time.

That’s where we’re going to mount it. 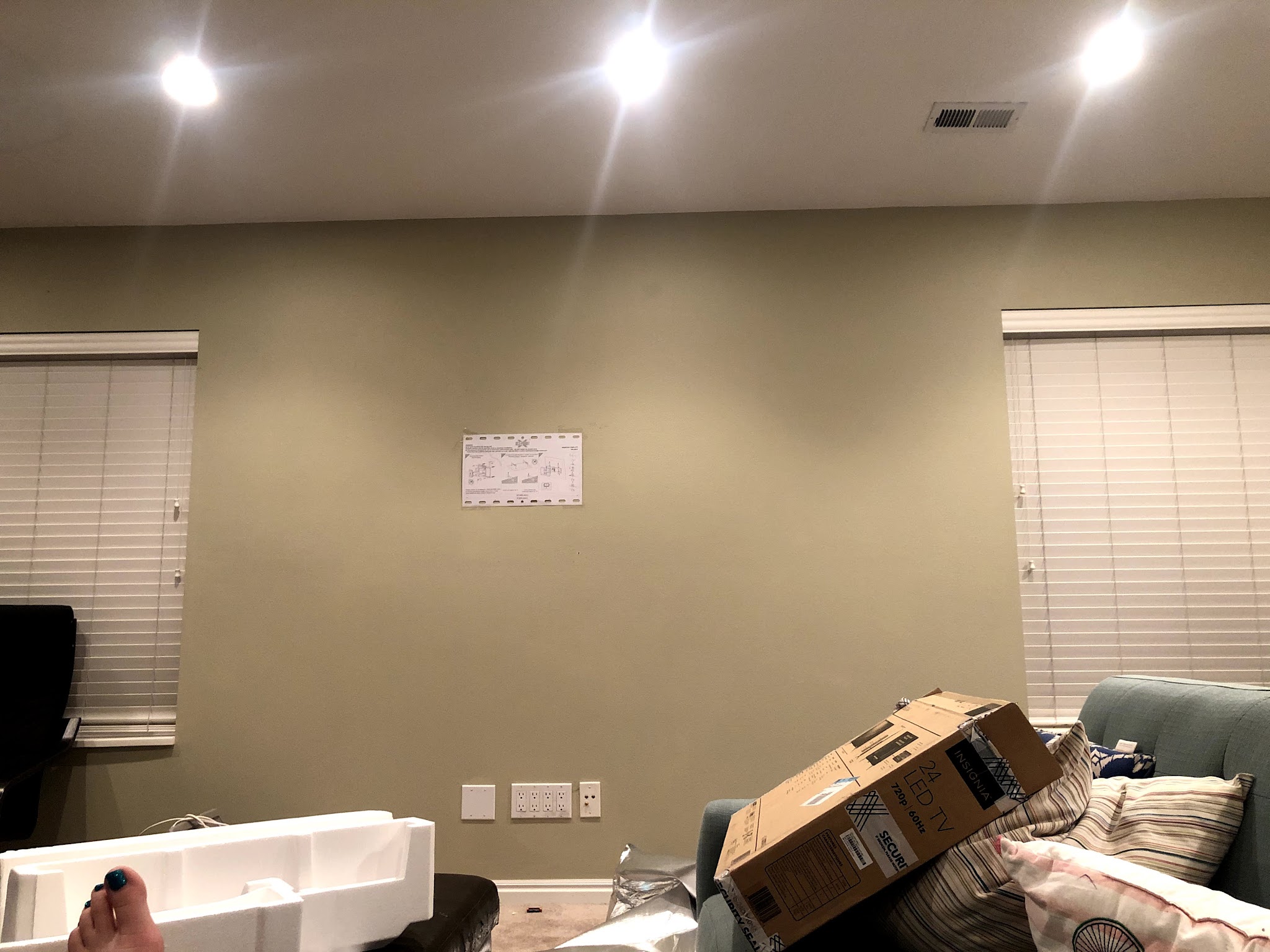 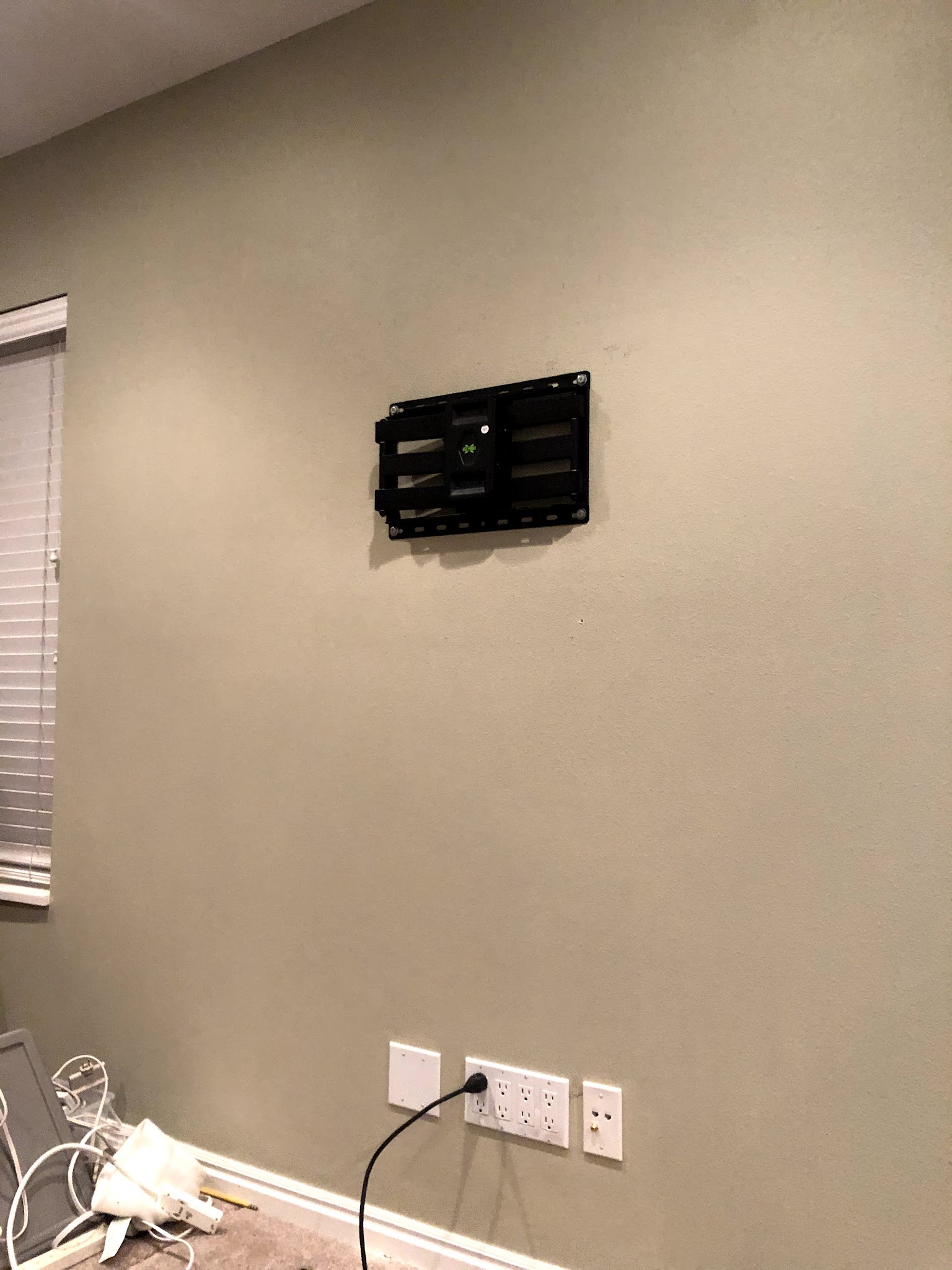 Hole in the wall made. 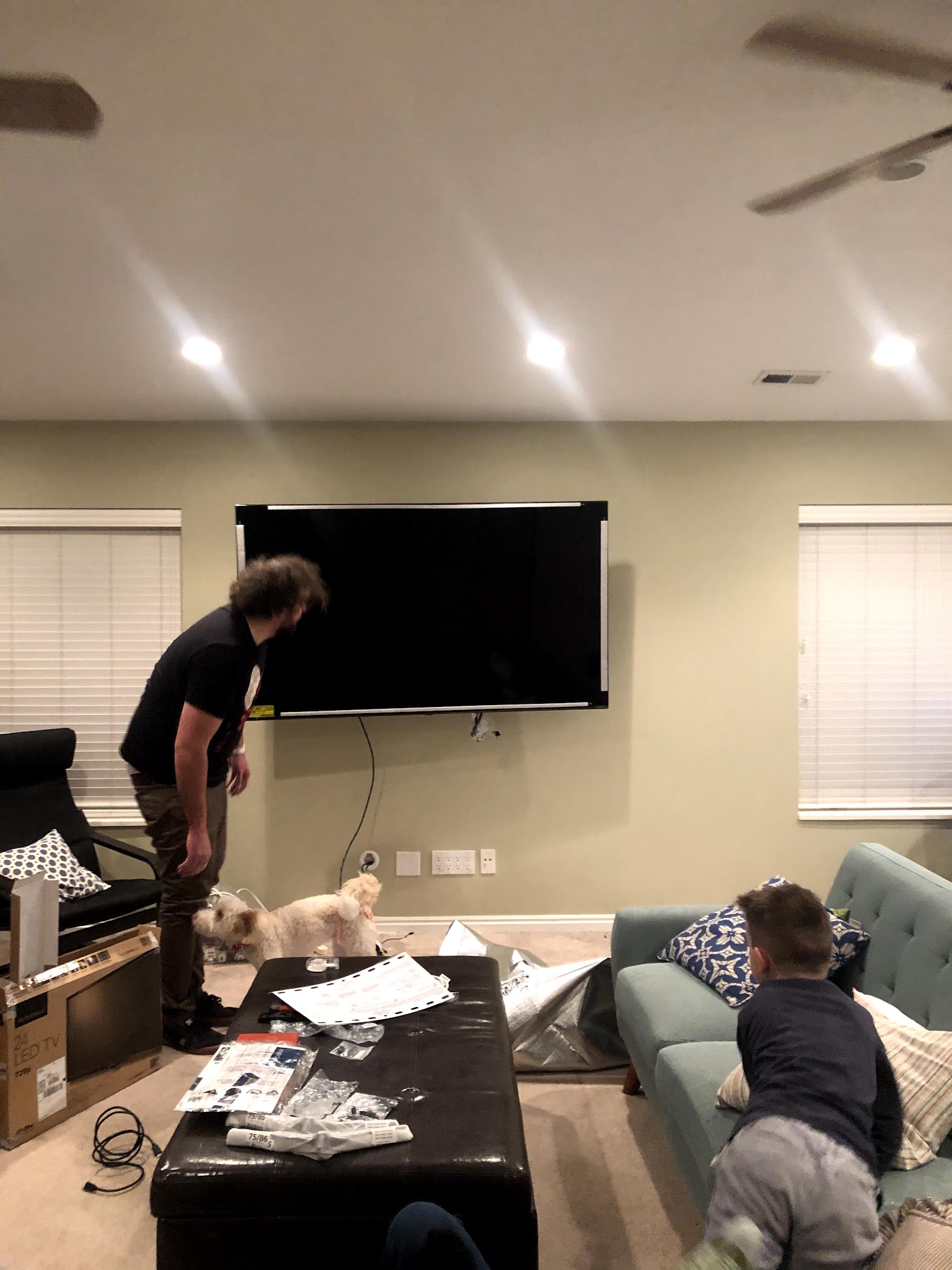 It was pretty phenomenal. When we play multiplayer we each have a 30 inch screen area.

The next new piece arrived for the house, a mahogany buffet! 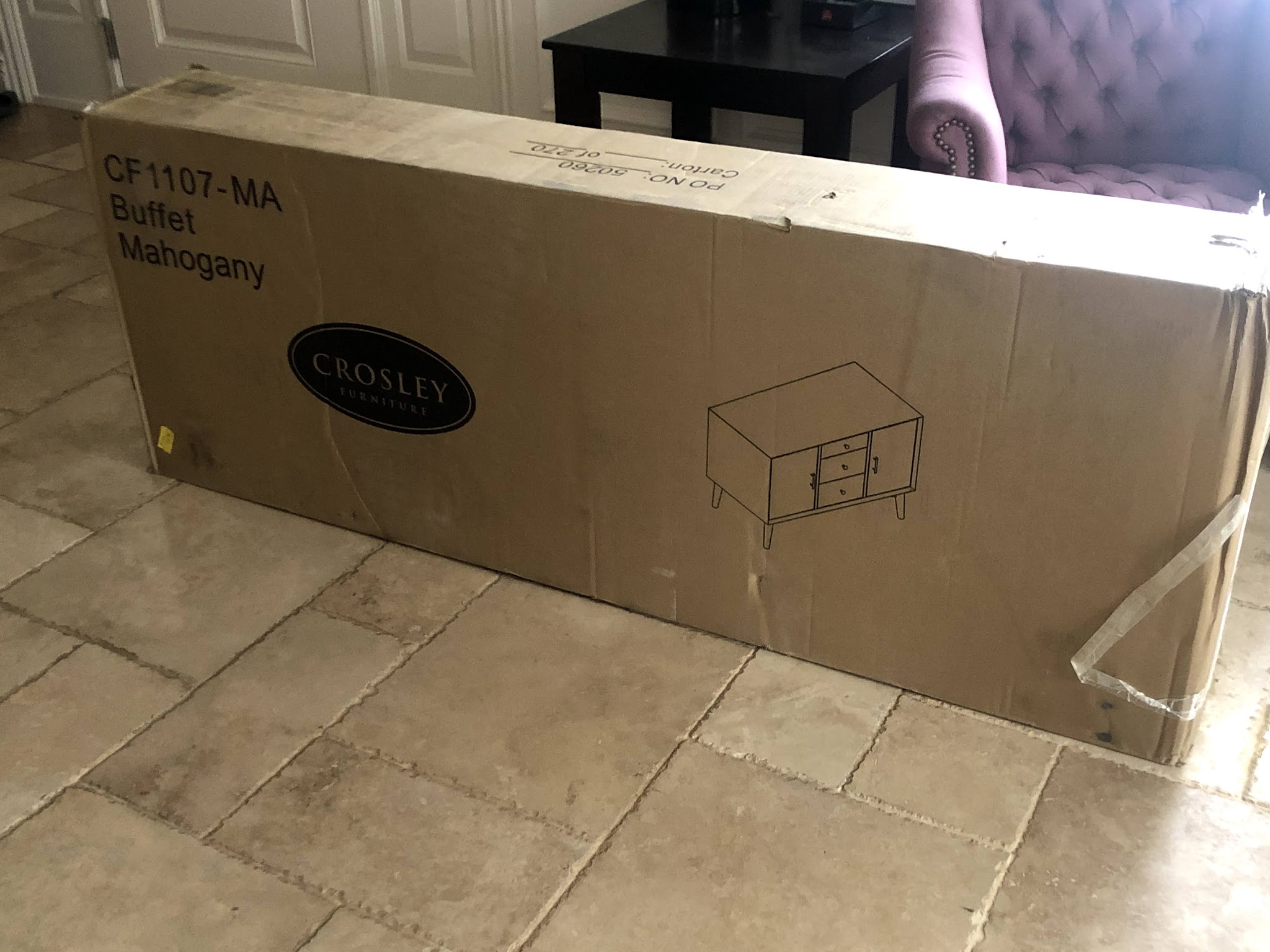 We ordered it and it arrived in two days. We built it, and it is beautiful.

We spent most of the month of February searching for a new kitchen table. After several fruitless visits to stores all over town, we finally found just what I wanted at an online relator called Article.

We bought a bench, that wouldn’t arrive until May, we hoped, and chairs that would be here in days.

By March 5th the chairs had arrived and were built. 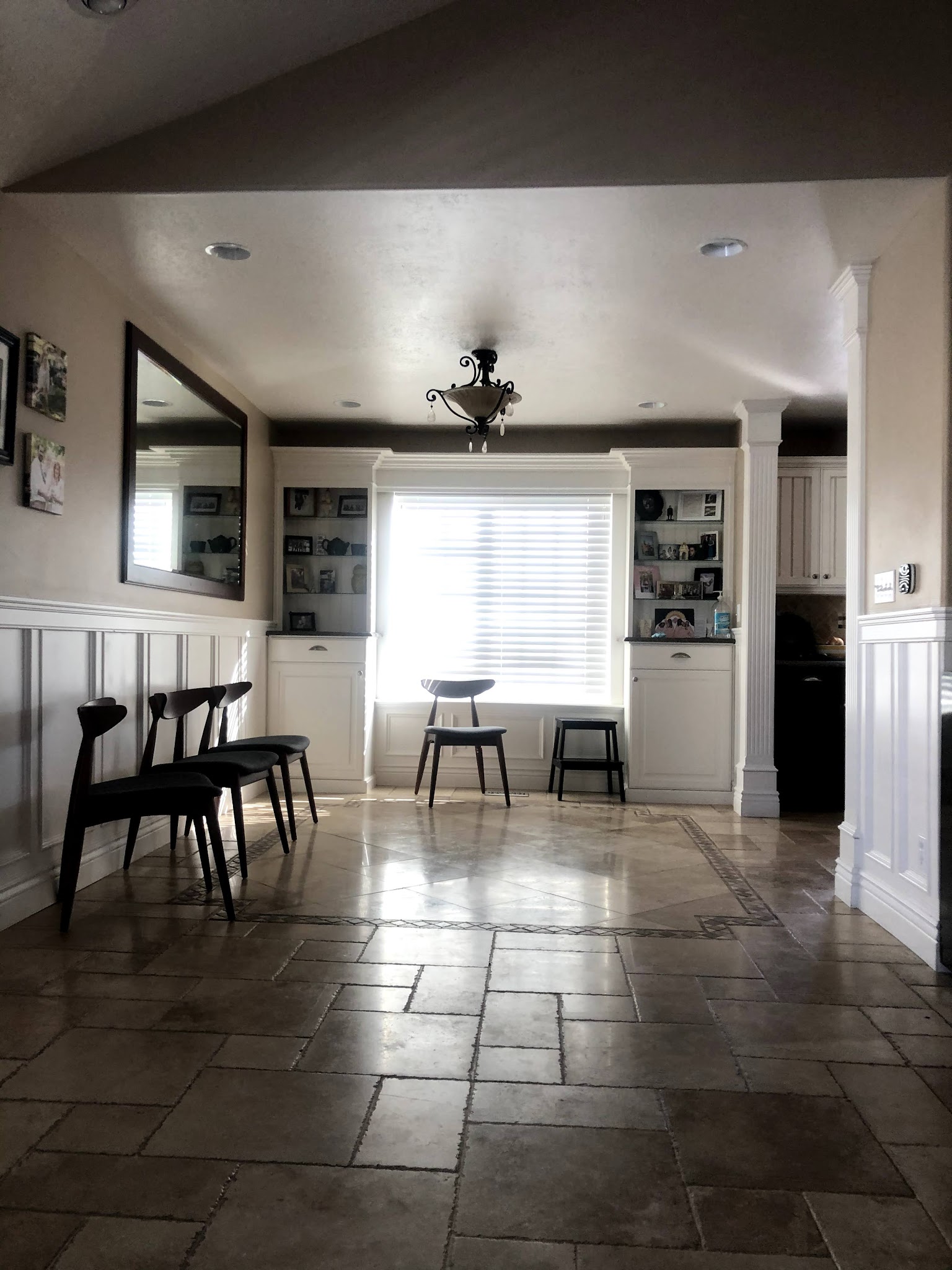 There are six of them, so it took some time for Karl to build them all. 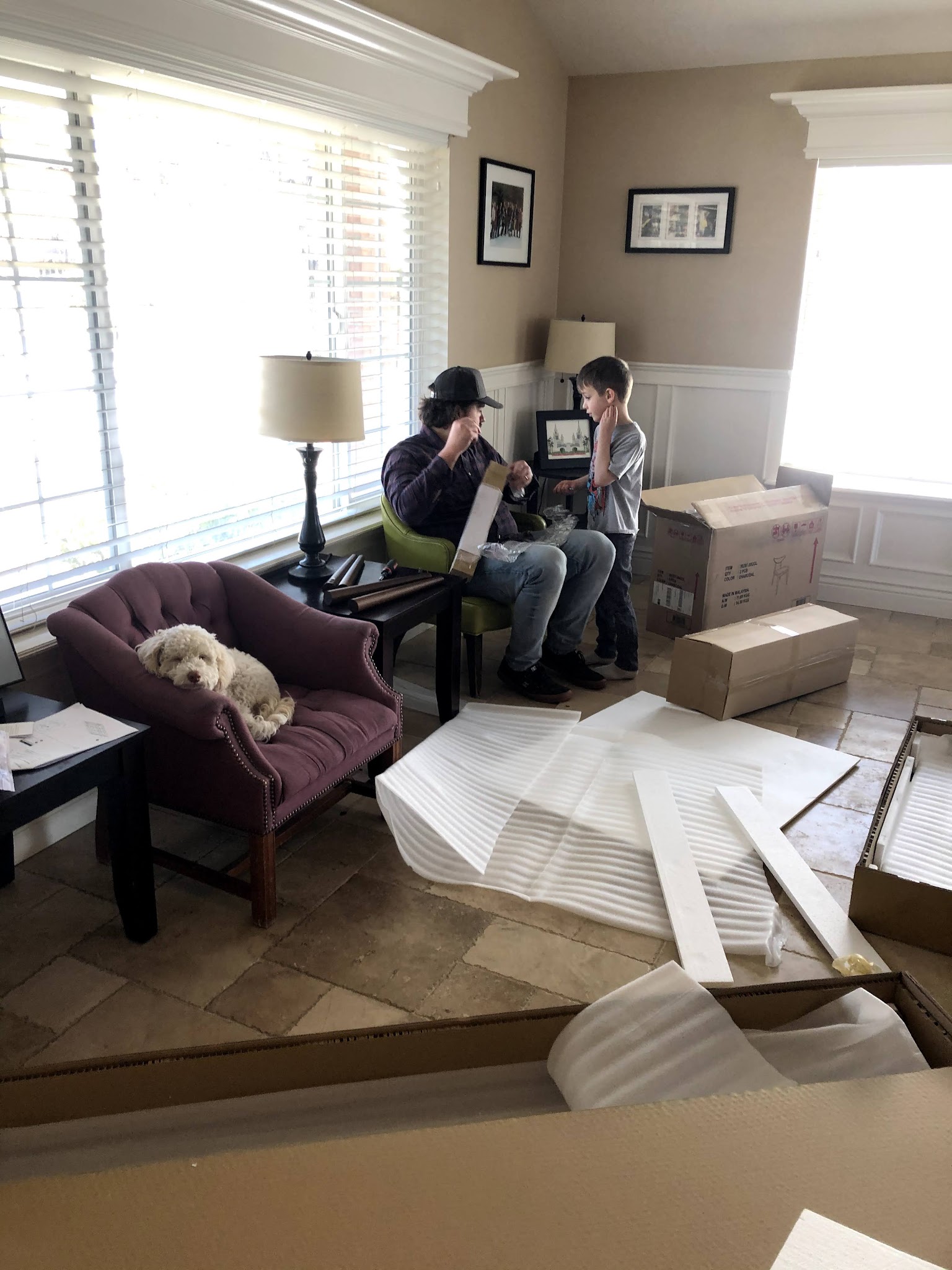 And the table arrived, and it is beautiful. 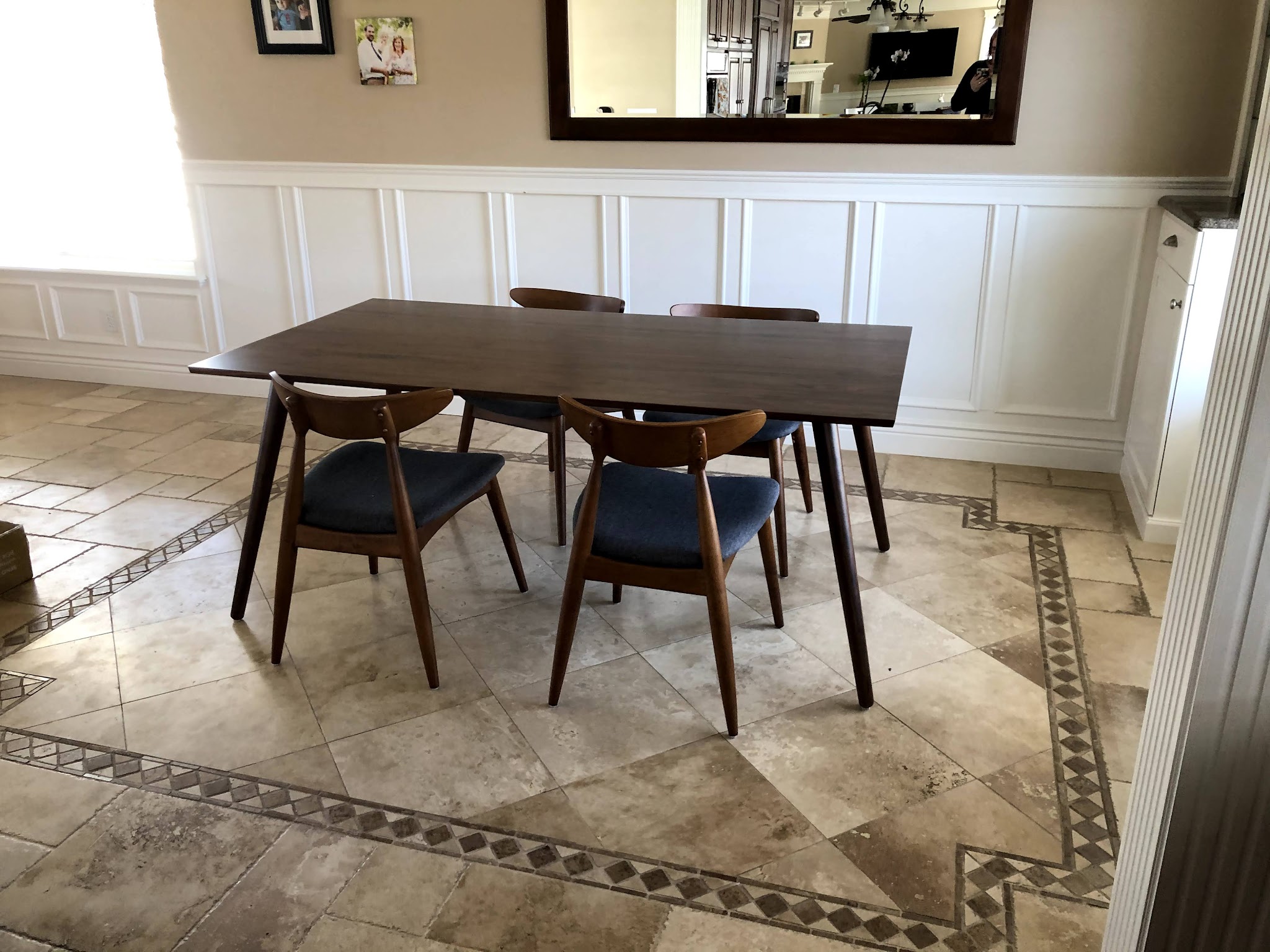 I love it so much. 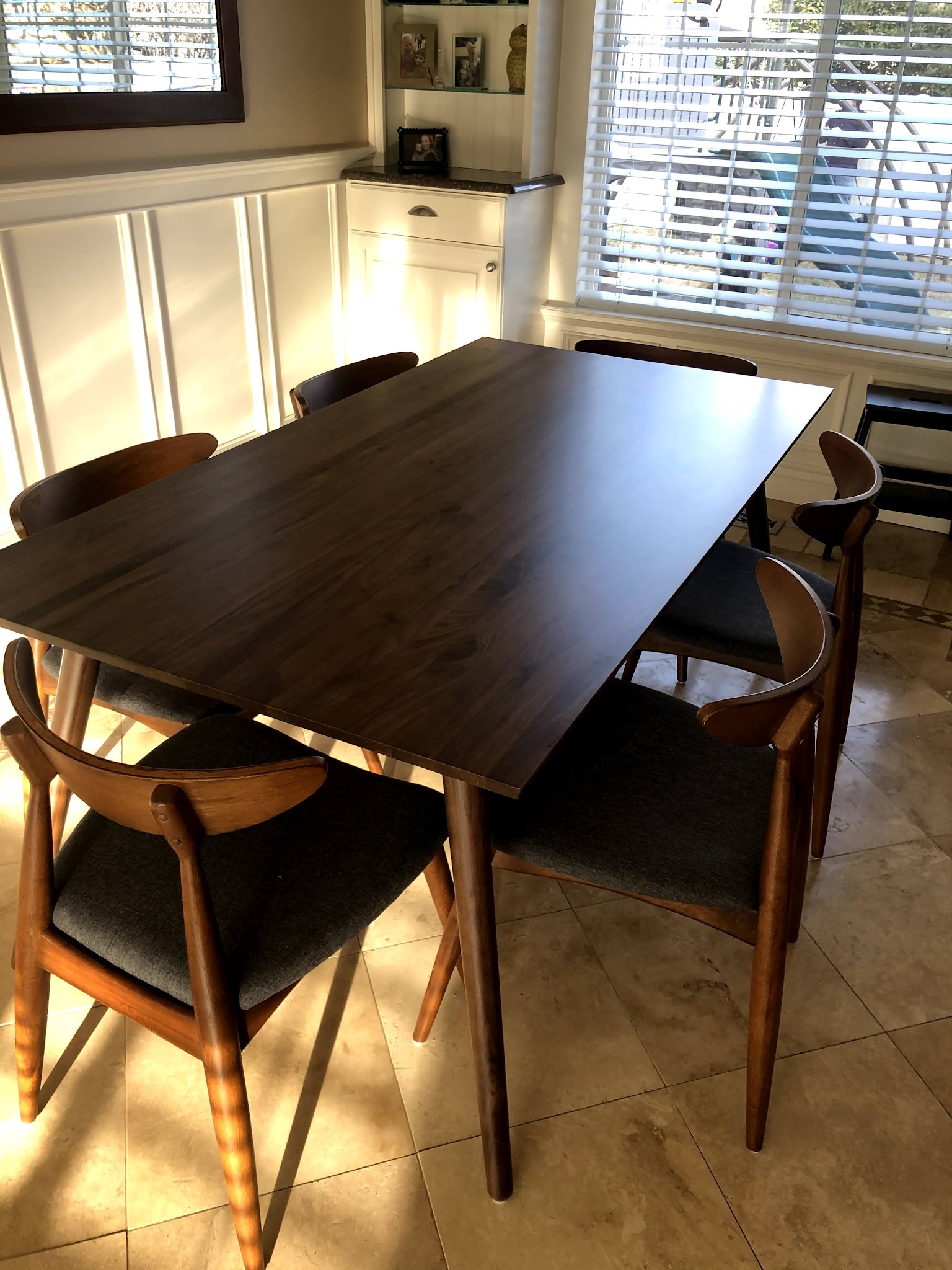 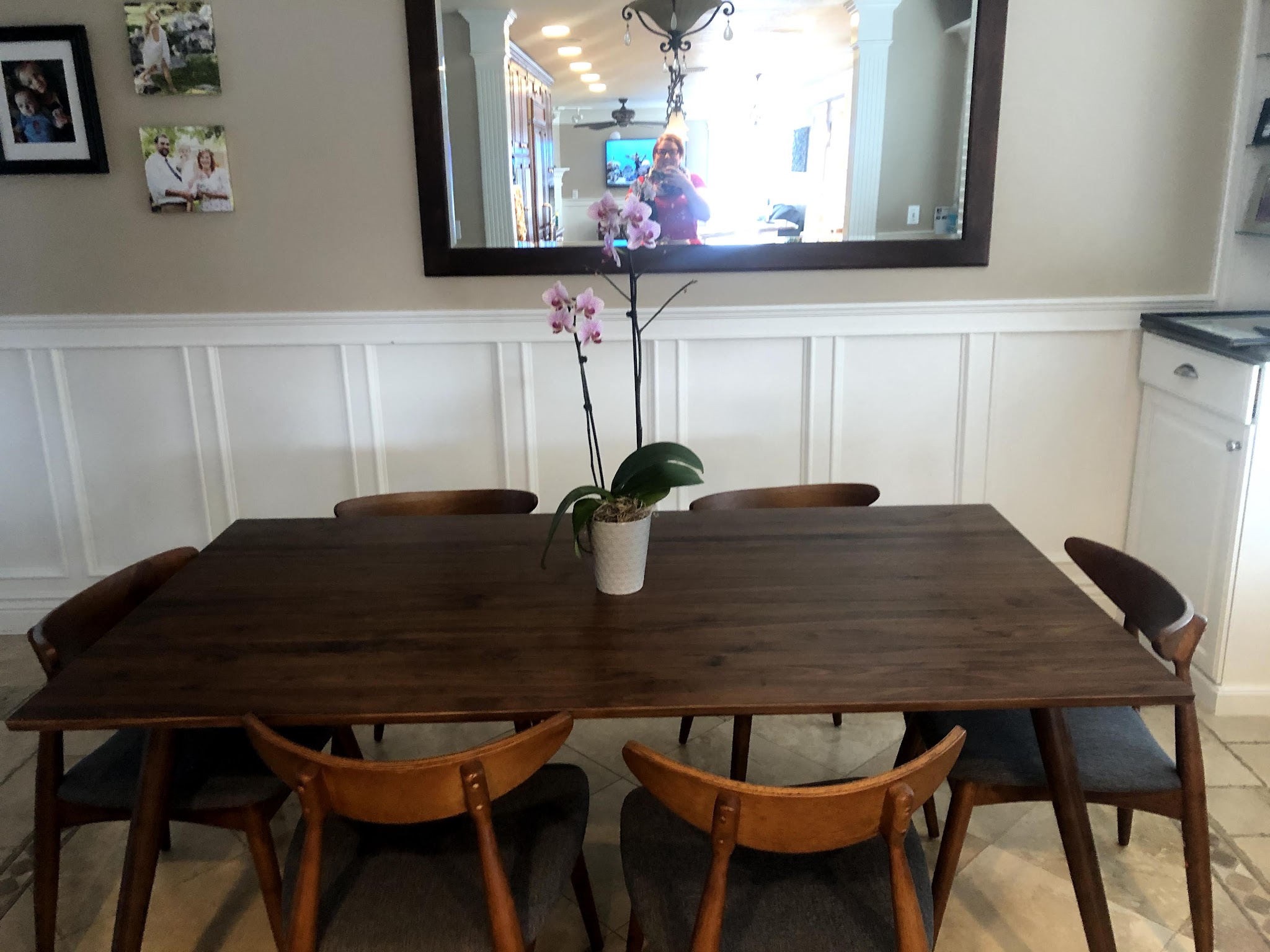 We got new doors for the bedroom! Another build.

(We also got a new dresser for Karl the week we moved in, and Karl installed new fans in all the bedrooms as well as his butt)

I love them so freaking much.

We finally replaced the fan in the sitting room! I hated that thing.

On the same day Karl also replaced the back door for one that had a doggie door. 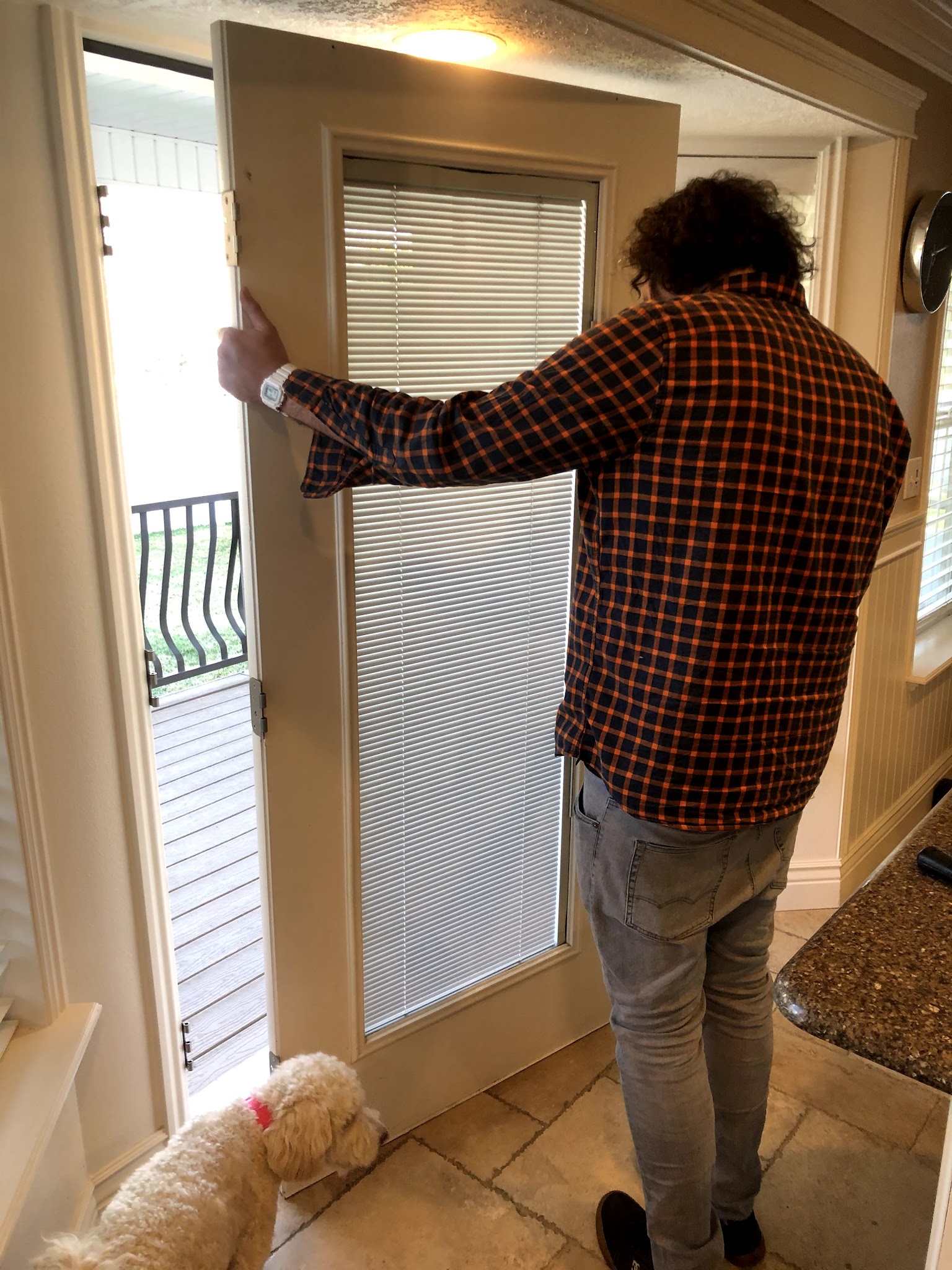 I don’t have a picture of this, but Karl made our room a “smart room” we can now turn the fan and lights off and one by command. Woot.

Our new couch FINALLY arrived! It came in a HUGE box, and was left very unceremoniously dropped onto our driveway. We were left trying to get it inside, we had to unpack it outside, and bring it in piece by piece. THEN assemble it in the sitting room. We LOVE it.

Our new light fixture for the entry way finally arrived. And despite the large amount of money we spent on it, it came broken. It took so tinkering, but it did eventually get up there.

The old Tuscan style iron fixture came down, and it was tricky and took three people’s efforts.

It was even more tricky getting the new one up.

After a couple of attempts we got it!

We’re REALLY happy with the way it turned out. I only wish it were a little bigger, but I really love it.

Finally, today, the last be piece of furniture arrived, my new arm chair and ottoman! I have been waiting for this chair for MONTHS! When it arrived in two large boxes, and a pallet that is still here, I couldn’t wait to get it into the house.

Opened each box, they were carefully wrapped.

It took me some time to get the legs on each of the items, and Mirah made herself comfy on the cushions while she waited.

And speaking of fabulous!! Look at my new chair!

I am so freaking excited and happy!

I think my face says it all.

Getting used to my new view, and getting ready for some snuggles with all my favorite people.

We still have things to do and adjustments to make, but for 2021, I think we are about done.

Hooray, feeling really happy and super blessed to be able to have this wonderful home for our family to share with the people we love.