This blog could also be entitled: The 5k that Wasn’t. You see on this day, Monday October 13 (ooohhh) Karl and I were signed up to participate in my companies “5k Pumpkin Run!” It is an event that they do every year. The winners could get an I pod shuffle, and tons of other prizes. Karl and I were determined not only to participate, but to win some crap. We went to the Di, bought ridiculous running out fits and glasses, funny running sox and hats. We were excited.

I got into my car to go and pick Karl up for the event and … my car wouldn’t start. So we spent the next few hours buying a battery, call my dad, and trying to get the battery installed into the car. We missed the pumpkin run…bummer. But the experience was a funny one.

First let me introduce you to Hondie: 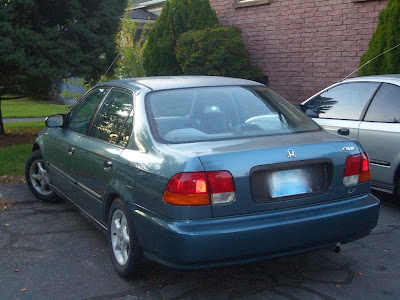 Isn’t she beautiful? She was a gift from my mom and dad for our wedding. One of two cars. (woo woo, our parents love us.) We could scarcely afford the insurance on one car let alone two, so we gave the Mercury Mystique to Caitlin for Christmas…but that is so another story, in which I think Zack got the short end of the stick.

Hondie is a Civic, of the ’98 edition. She is loosing a little of her paint… 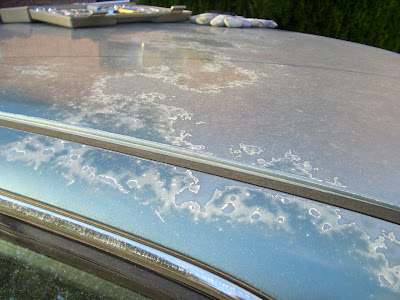 The old girl has nearly 150, 000 miles on her…and still running strong! 3 of her 4 windows are in working order, and the ac works…sort of. Other than these minor problems which old cars have, we have no complaints. She has been having trouble starting in the mornings recently so this trouble with the battery was a long time coming. That afternoon coming out of work I opened the hood and this is what I found… 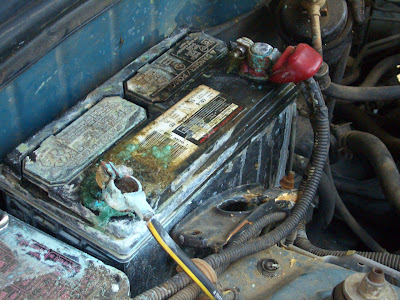 This is actually better looking that what I found. This is after a few treatments of Baking Soda and warm water. When I first opened the hood, it was cover in a blue fuzz…my battery had lost all of it’s acidity. I knew this because one of my co-workers who had had tons of problems with batteries before recognized the color. (tender mercy of the lord that she was there! She saved my life, got me jumped so I could get to the store and get a new battery. Thanks Amanda!) 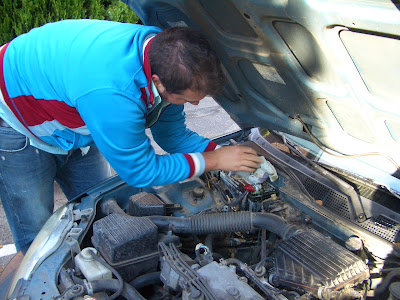 We got the car and the new battery home, so we thought, “OK, lets just get this sucker our, and get the new one put in.” Getting the old battery our turned out to be a challenge because the metal on the bolt was so corroded that we couldn’t get it off. 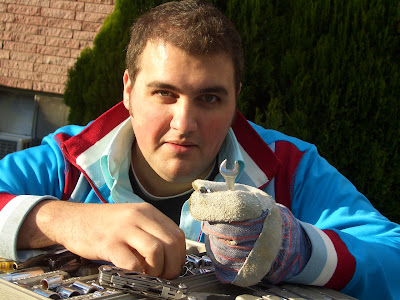 Karl tried every tool in Krysta and Zac’s set to try and get the thing off, with no avail. Karl kept saying under his breath, “if only I had a vice grip.” Finally we saw a guy in our parking lot working on his motorcycle and we figured he my have the tool we need. His name was Caleb and he did have the tool that we needed and went a step father and came over and tried to get the bolt off himself. 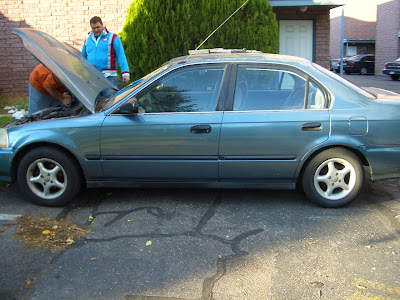 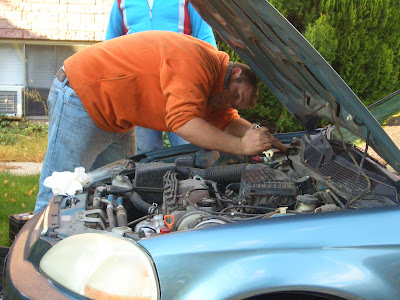 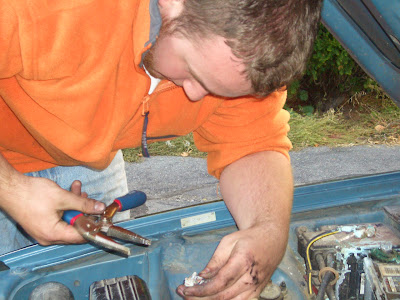 Which, after a few failed attempts and lots of pulling, he was able to do. Karl stood back and said, ” I feel demasculated, having some other guy come and work on my car.” I knew that if he had had the proper tools he could have done it. (thanks so much Caleb!) We pulled the battery out. 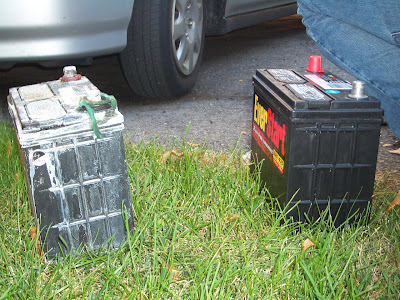 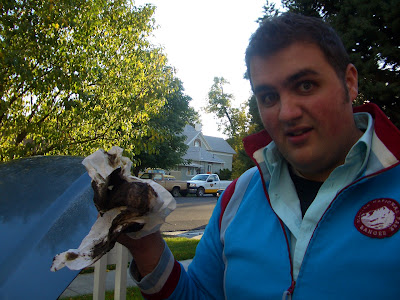 We cleaned out the area around the battery including all of the battery cables, and everything that had battery acid residue spread all over it. 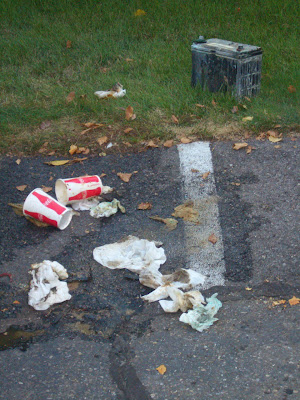 Then several hours after we had started…we did it! We had our brand new battery in our beloved Hondie! There she is, good as new. No more having to be pushed down the street to get a start in the morning! Yea! 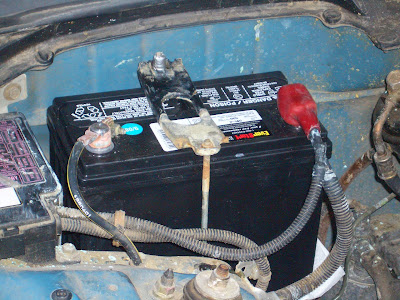 So as a recap of “thank you”s. Thanks Amanda my co-worker for giving me a jump at work so I could get to Wal Mart to buy a new battery! Thanks Dad for listening to me whine about having to buy a new one and helping me get what I needed. Thank you Emily for letting us use your baking soda to clean all off our battery and cables. Thanks Krysta and Zac for letting us use your tools. Thank you Caleb for helping us get the old bolt off, and then giving us a new one that wasn’t all corroded. Then of course, I have to thank my wonderful husband Karl, for letting me freak out a little and being patient with me through the whole thing. You are all the best. Really I feel so blessed to be surrounded by such wonderful and giving people.

3 thoughts on “The Day our Car Died”