Branny and Leah were a bit behind us. So we went in ahead of them.
Where? To the Museeum of Pop Culture. Once known as the MEP. (The Music Experience Project.)

The building itself was a work of art.

With out further ado, we went in!!
It was quiet a fun place!

Mirah was jumping up and hitting her head to kill the bad guy.

And there was a Star Trek Exhibit!

A pretty exciting entrance to the exhibit.

Golden statues of the different ships.

The pieces in the exhibit went through the many incarnations of the show.
The Gorn!

Lieutenant Data and his quest to feel emotion.

And then the nightmares from my childhood, The Borg.

They even had a Borg transformer!

Karl didn’t ever watch late Next Generation or the Borg Movie-so he didn’t know what all of this was.
No Captain Picard!!

Then the lovely Seven of Nine’s costume. She was TINY!

Then on to the movies.

Karl even got to participate in a reenactment of KAAAHN!

It was almost successful.
Costumes of the two Kahns.

We even got a chance to go through a Jefferies Tube!

The second floor had a ton of cool memorabilia.

There are several Star Trek Themed Bands. They had some of their songs you could listen to.

You could even dance to it, like Mirah.
They even had this awesome transport bay where we beamed down to plants to fight an explore:

(Lucas’s pants kept falling down.)
Karl got ready to so his part.

Our last stop:
The Bridge.

It was at this point that Brandon and Leah met up with us.
We looked around and ended up in the Indie Game Revolution Exhibit.
That had all of these rad games set up.

Like this one where the lights on the buttons changed as you played it. And you were asked to do things like shower and read. Haha.

Leah and Branny found this funny one where you are two sides of a person trying to get a ball on one side or the other of a line.

Also, lots of his art.

There was a video of his different machines and examples of them in movies and TV.

There was another mural next to that area of Macklemore and Ryan Lewis from the Thrif Shop video. I didn’t know they are from Seattle. Next to the mural were a bunch of cool vests and jackets to put on and pose with.

Branny and Leah took a turn too.

Next we played at Percussion Place. We all took turns playing different notes on different xylophones.

Then to the Music Experience Project.

The Museum closed just then. So we had to leave. We got a return ticket to come the next day, since we only got a couple of hours that first trip.
Cool thing was, there was a GREAT play area next to the museum.

Past these cool installations.

There were tons of kids and a huge play ground.

There were these big…chimes? Bells, gongs?
The kids kept running back and forth hitting each one.

Each chime thing had a pool ball that you used to hit them. 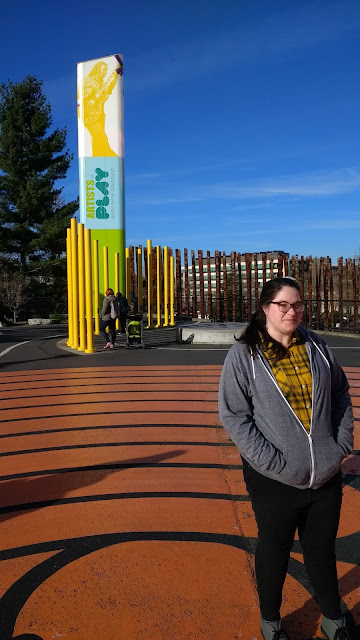 While Lucas and I played on the merry go round, Karl and Mirah stood in line to climb this radical play set.

I think she was loosing her nerve.

In the end she decided not to go up. It was pretty intense.

There was another set of chimes.

The kids got board, and we had tickets to go up the Space Needle!